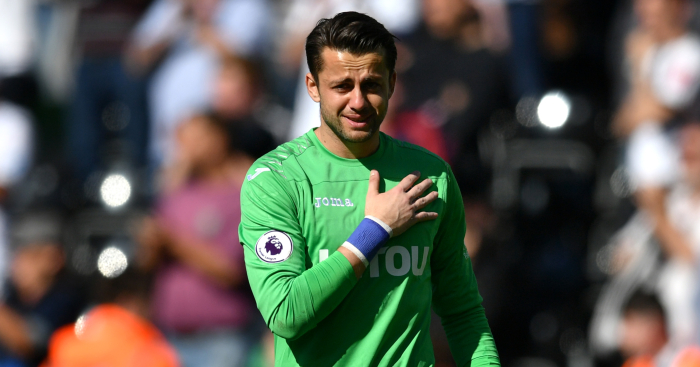 West Ham have announced the signing of Poland goalkeeper Lukasz Fabianski from Swansea.

Fabianski, 33, joins the Irons on a three-year deal for an undisclosed fee following the Welsh club’s relegation from the Premier League.

“West Ham is a massive club so I’m really happy to be joining at such an exciting time here,” he told West Ham’s website, mere hours after Issa Diop described them as a “big club“. Fools.

“I will do my best on and off the pitch to help the team to achieve the best results possible and can’t wait to start this new chapter of my career,” he added.

Former Legia Warsaw and Arsenal goalkeeper Fabianski is currently at the World Cup with Poland.

His transfer follows the signing of defender Diop from Toulouse for a club-record fee, reported to be £22million, and full-back Ryan Fredericks from Fulham.

West Ham director of football Mario Husillos said: “Lukasz is an experienced and established Premier League goalkeeper, with great quality that he has shown at both domestic and international level.

“He fits perfectly the mould of the modern goalkeeper, with excellent agility, presence and distribution, and will bring strong competition to the position.”