Home All The News Fabianski: The Swansea haters are our motivators 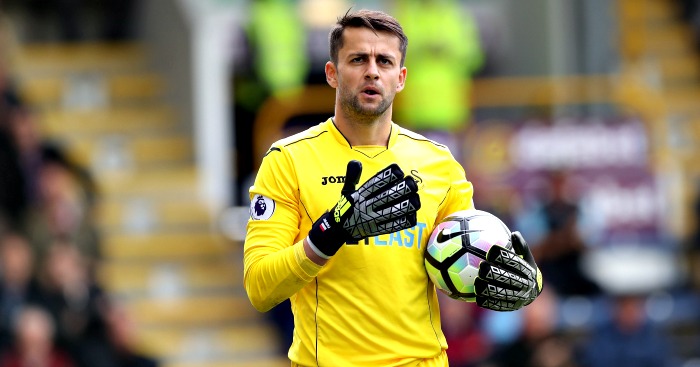 Lukasz Fabianski insists the Swansea dressing room has paid no attention to the doom-mongers at the start of the Premier League season.

Successive league defeats to Hull and Leicester and an underwhelming transfer window in which they lost key players fostered a feeling among some Swansea supporters that Francesco Guidolin’s side face a season of struggle.

But Swansea fought back to draw 2-2 with title hopefuls Chelsea last weekend, and Poland goalkeeper Fabianski believes that shows the spirit and character in the camp.

“I wasn’t really paying attention to all the doom and gloom,” Fabianski said ahead of Sunday’s trip to Southampton.

“As a professional you just have to get on with your job.

“Every day you come in and just do the best you can. Other things are not in our power.

“We just control what we can control and I think with this group there is quality.

“There are some really good players and in the second half against Chelsea you could see the character in the team.

“Fans obviously have a right to share their opinion and we respect that, but we need belief from them as well.

“You see the (transfer) market and everyone has gone crazy, but you’ve just got to keep your head cool and just focus on the work. I think if we do that then it will pay off.”

Swansea won at Burnley on the opening day and their up-and-down start to the season was reflected by a strange encounter against Chelsea.

Guidolin employed a three-man central defence for the first time in his Swansea reign, but abandoned the experiment before half-time with Chelsea dominant.

The change worked as Swansea scored twice within two second-half minutes before Diego Costa denied them victory with a late equaliser.

“It was a good second half performance,” Fabianski said.

“You could see there was more space to play out from the back. We used that space better than playing with the five.

“I don’t think we can be questioned from the physical or mental point of view.

“The game against Hull was a strange one because they were just defending and it didn’t happen for us.

“Even against Leicester when we struggled we almost turned the game around in the last 10 minutes. We put the pressure on them and we can run for 90 minutes.

“We struggled for five minutes after Chelsea equalised because they pushed.

“But in the last five minutes we were the team that had control and tried to go forward to try and win the game.”

After Southampton, Swansea have a cup and league double-header with high-flying Manchester City before Premier League tests against Liverpool and Arsenal.

But Fabianski feels Swansea should not be concerned by such a demanding run of fixtures.

“Every point in the Premier League gives you something, especially playing against a team like Chelsea,” Fabianski said.

“They are one of the favourites to win the league and that gives you something extra when you look at the history of Swansea playing against the big teams.

“There always seems to be something good happening for us. It shows that quality within the group and we should not be worried too much if we focus on our job.”