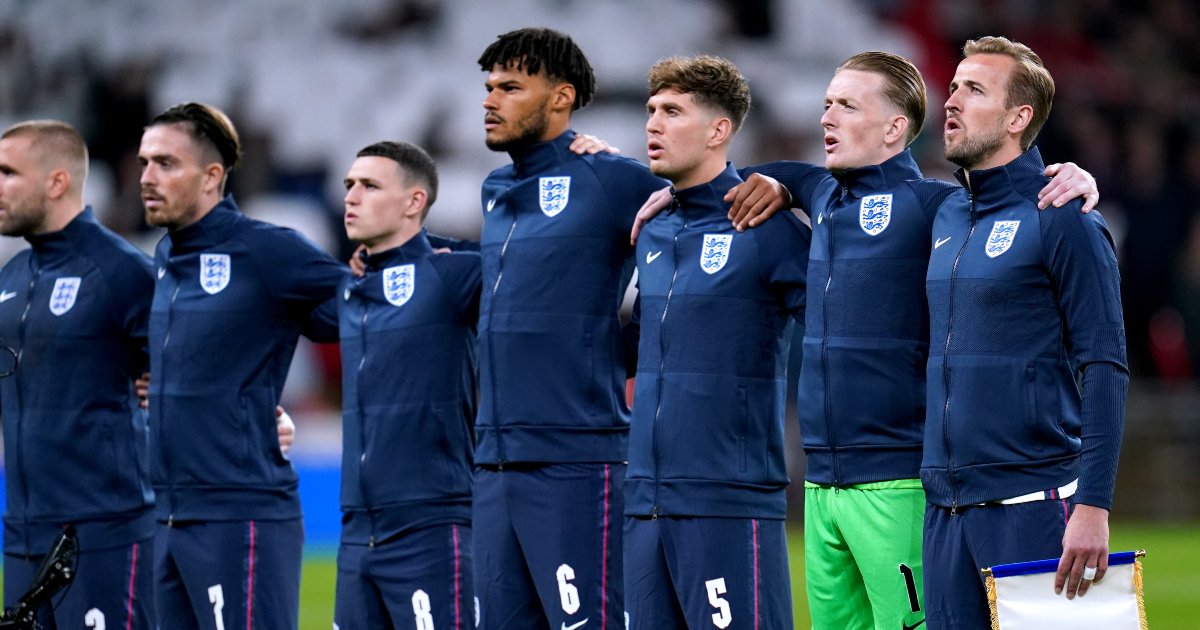 We were only here with an England ladder six weeks ago so not an awful lot has changed. Harry Kane remains top but honestly, it all feels a little bit bleak again. For f***’s sake; we were in a major tournament final only three months ago…

September’s rankings are here. Remember, this is an approximation of what Gareth Southgate thinks, not us…

1 (1) Harry Kane
“I don’t think singling out any players is fair,” said Gareth Southgate but life is unfair, Gareth, and Harry Kane was absolutely sh*te against Hungary. He remains top of this list because there is almost zero chance of him being replaced by Ollie Watkins or Dominic Calvert-Lewin in the very near future but while he remains at Tottenham, England suffer. #headsgone.

2 (5) Declan Rice
Only 22 and already has an astonishing 26 caps. The only England games he has not started over the last two years have been friendlies and cruises against San Marino and Andorra. There is a frightening lack of competition for his place. For context, Steven Gerrard had just nine England caps at the same age.

3 (2) Harry Maguire
Not looked massively comfortable in the early weeks of the season for Manchester United but there is little danger of him being usurped in this England team by Tyrone Mings. There might be significant questions further forward but the current England centre-half partnership looks untouchable.

4 (4) John Stones
England’s most potent goal threat v Hungary is absolutely re-established as part of England’s first-choice centre-half partnership even though he has not played a minute for Manchester City yet this season.

5 (6) Kalvin Phillips
Much missed against Hungary. Sometimes not playing for England is the best way of boosting your England standing.

6 (3) Raheem Sterling
Really poor v Hungary and it’s little wonder that he is lacking sharpness in front of goal; he has not started City’s last two Premier League games and rumours persist that he will leave the club. When people start touting you for a Newcastle move, you know things are going badly. But he still has plenty of credit in the Bank of Southgate, which genuinely does sound like a bank.

7 (9) Luke Shaw
The left-back battle has been so thoroughly won that it now seems ludicrous that he was not in the England squad a year ago.

8 (8) Jordan Pickford
Makes very few mistakes for England and seems to get away with those he does make. Aaron Ramsdale thinks he can take the No. 1 jersey but Pickford has already seen off many, many contenders with an aplomb he rarely musters in goal.

9 (7) Mason Mount
Most England fans struggle to ‘get’ Mount and he did nothing to persuade anybody otherwise against Hungary. At the moment his place looks secure – if he is fit then he starts against everybody but the minnows – and that probably does not reflect brilliantly on Southgate. No England goals since March, by the way.

11 (10) Jack Grealish
Probably England’s most creative player against Hungary and yet he was the first hauled off. The suspicion of Southgate towards the game’s mavericks remains.

12 (17) Phil Foden
The only England player to feature for every minute of both games in this international break and that has to mean something; certainly his performance against Andorra hinted at a different, deeper role against poorer opposition. Right now it looks like Grealish v Foden for one spot. Or alternatively, neither starts as Southgate panics and brings in another right-back.

13 (13) Kieran Trippier
Second-choice right-back and quite possibly second-choice left-back as well. Captain v Andorra, which tells you that he is going nowhere fast.

14 (15) Tyrone Mings
Started alongside Stones v Hungary so we can only conclude that he is England’s third-choice centre-half.

15 (16) Conor Coady
Started alongside Stones v Andorra so we can only conclude that he is England’s fourth-choice centre-half.

16 (14) Reece James
Originally called up by Southgate despite his injury so we assume that three or even four right-backs are in Southgate’s plans. F*** it, why stop at four?

17 (12) Jude Bellingham
“He’s playing Champions League games, he’s playing league games. As an 18-year-old he had a full season last season then into a European Championship so no break,” said Southgate when explaining his omission from the squad. With glorious hindsight, it may have been a mistake.

18 (18) Dominic Calvert-Lewin
We are making massive assumptions here but Everton being in the mix for a top-six place very much plays into DCL’s plans to be The Other Striker in this England squad.

19 (19) Sam Johnstone
Started in the ‘reserve’ team v Andorra once again and even bagged an assist. Surprisingly, him and Ramsdale appear to have ended the international career (is seven caps a career?) of Nick Pope.

20 (20) Bukayo Saka
First off the bench against Hungary, though his slight Euro 2020 hangover continues with some less-than-scintillating form for both club and country. Lovely though, isn’t he?

21 (35) Aaron Ramsdale
Still uncapped but surely not for long as his form for Arsenal has been transformational.

22 (21) Jadon Sancho
Started and impressed in Andorra, though remaining on the bench as England toiled against Hungary suggested that he still has to convince both his managers. Maybe somebody should try him on the right? Just a thought.

23 (23) Jordan Henderson
Clinging on to his place in the England 23 as it stands. He has started just one England game since November 2020 and that has to ouch.

24 (24) Jesse Lingard
Not scoring or even assisting against Andorra leaves a big old x against his name. We still think he might need to leave Manchester United on a permanent basis to move back into the 23.

25 (25) Trent Alexander-Arnold
Injury robbed Southgate of the chance to clarify the TAA situation. He’s just too good to drop out of the picture altogether but we honestly have no idea if he will play again for England under the current coach. Does the current coach?

26 (26) Marcus Rashford
November will be interesting, assuming Rashford returns and forces his way into the Manchester United starting XI.

27 (34) Tammy Abraham
‘Desperately needs a move this summer; he won’t get the football he needs at Chelsea’ was April’s assessment. ‘Move secured, and now we wait,’ we said last month. ‘October brought a recall and a goal,’ we say now.

28 (27) Ben Chilwell
Made it back onto the pitch for both Chelsea and England in quick succession. Which might just force Southgate into picking almost as many left-backs as right-backs.

29 (RE) Fikayo Tomori
Fifth-choice centre-half as it stands, which puts him ahead of Bens White and Godfrey after an excellent start to the season in Italy.

30 (42) James Ward-Prowse
Injury to Kalvin Phillips rescued his England chances, which he helped with a goal against Andorra. It’s hard to see him emerging from the periphery, mind.

31 (38) Ollie Watkins
One of several ‘much of a muchness’ options for the coveted title of ‘fourth-choice England striker’.

33 (28) Mason Greenwood
His absence was bundled in with Bellingham’s by the press and Southgate but the truth is that Greenwood is still stuck on one cap and that looks unlikely to change any time soon.

34 (30) Ben White
“He would have been very close to this squad,” said Southgate but the recall of Tomori must have hurt. Will the World Cup come too soon for the Arsenal man to usurp Coady or Mings?

35 (44) Demarai Gray
Jamie Vardy is the only Englishman to have scored more goals in this season’s Premier League. One of the signings of the season is surely in Southgate’s thoughts.

36 (29) Patrick Bamford
Looked out of his depth against Andorra and that’s really not a good look.

37 (47) Emile Smith Rowe
“He’s a player we like a lot and he was very close to making this squad,” said Southgate. Scoring for England’s Under-21s will have done him no harm.

39 (RE) Ben Godfrey
Playing under a defensive manager like Rafa Benitez as Everton over-achieve will benefit him.

40 (37) Eberechi Eze
We know Southgate likes him. Which puts him ahead of this lot…