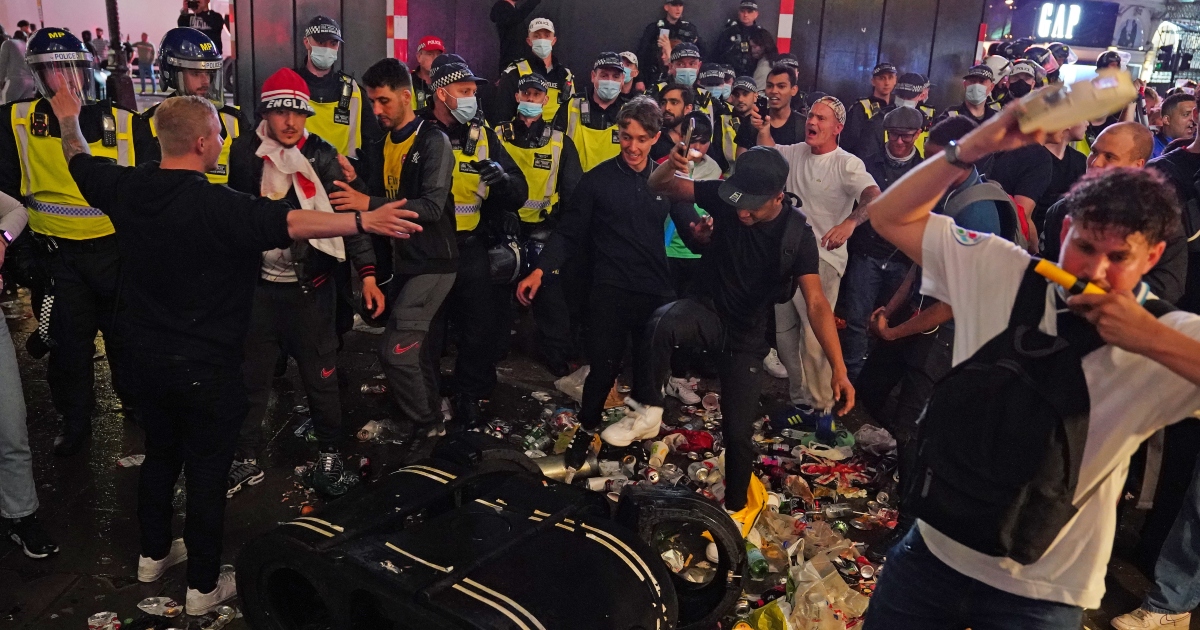 An independent review into the trouble surrounding the Euro 2020 final at Wembley has concluded that there were a number of ‘near-misses’ from potential fatalities.

The review of the chaos that unfolded around the match between England and Italy on July 11, led by Baroness Casey of Blackstock, identified a series of “near-misses” which could have resulted in serious injuries or deaths.

The review said there had been a collective failure by all the organisations involved in planning for the final to prepare for the worst-case scenario.

Around 2,000 ticketless individuals were found to have gained entry to Wembley, with 400 of those ejected, but a dire situation could have been made much worse by an England victory, multiple contributors to the review said.

A ticketless group of 6,000 were believed to be preparing to storm the stadium as legitimate ticket-holders were trying to leave.

An official from the London emergency services said the consequences of an England win would have been “horrific”, and that a major incident would have been declared at Wembley and in central London.

The official added: “I can guarantee that we would have been on our knees.”

An official from the Sports Grounds Safety Authority told the review: “Thank God England lost. If they had won you would have to open the doors to let people out and the stadium would have been stormed.”

An FA official recalled individuals being stood like “zombies”, not even watching the game on their phones, waiting to get in.

Ticketless individuals were found to have gained entry by tailgating or involvement in one of 17 mass breaches of disabled access gates and emergency fire doors identified by the review, which “jeopardised the lives of legitimate supporters and staff”.

The breaches stretched from 90 minutes before kick-off up to the penalty shoot-out, the review found, with disabled supporters particularly affected.

One individual even impersonated a steward and hijacked a disabled child in a wheelchair, separating him from his father in an attempt to gain entry to the stadium.

All agencies responsible for staging the final had been caught off-guard, the review found, with police deployed too late.

“I am clear that we were close to fatalities and/or life-changing injuries for some, potentially many, in attendance,” Baroness Casey concluded.

The review found the easing of Covid-19 restrictions, along with England’s first appearance in a major final since 1966, had created a “perfect storm”.

It said the absence of a fan zone contributed to the chaos and would have acted as “a much-needed pressure valve”. The review found the Metropolitan Police made repeated requests to the Government for such a zone to be set up.

Witnesses to the review said as well as alcohol, cocaine use was widespread and the drug was being taken “in plain sight”.

Baroness Casey made five general recommendations. The first called on the Government to consider a new category for matches of national significance, with enhanced security measures and stricter measures around the sale and consumption of alcohol.

It called for a review of stewarding, and for who is accountable in ‘Zone Ex’, the area immediately around the stadium, tougher penalties for individuals found guilty of involvement in football-related disorder and an FA campaign to bring about a “sea change” in attitudes among supporters.

FA chief executive Mark Bullingham said his organisation fully accepted the findings and he apologised for the “terrible experience” many suffered within Wembley.

“The review makes clear that the circumstances leading up to the match led to a perfect storm of lawlessness. No event is set up to deal with such disgraceful behaviour from thousands of ticketless fans. Collectively we must never allow this to happen again.

“Baroness Casey is clear that moving forwards, where there is an event of national significance, we and all agencies must view it through a different lens.

“I would like to thank everyone who worked at the match that day. Many people went well above and beyond their roles and performed their duties with courage and determination. This was often at personal risk to themselves.

“The lessons learned from this Review will ensure that fans have a good experience at major international events at Wembley, as they have for many years.”

The FA has already been sanctioned by UEFA in relation to the disorder, with supporters banned from their next home UEFA competition match.