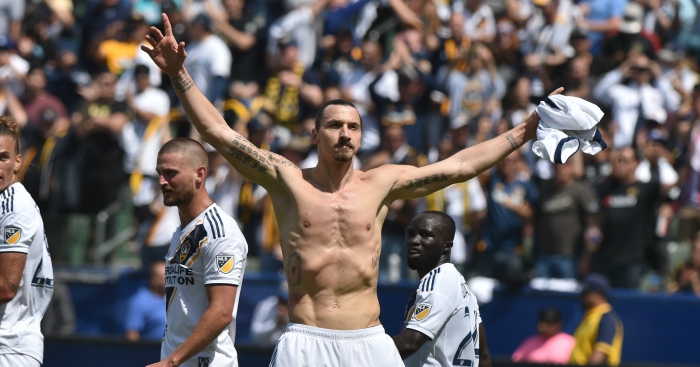 Zlatan Ibrahimovic marked his LA Galaxy debut in typically flamboyant fashion with a 35-yard equaliser and a stoppage-time winner in a stunning 4-3 win over Los Angeles FC.

The high-profile striker, fresh from Manchester United, announced his arrival in Major League Soccer by lashing home a bouncing ball from way out just six minutes after coming on as a substitute as the Galaxy fought back from 3-0 down.

And he then headed home at the death to crown a magnificent derby comeback.

He said after the game:

“The fans were demanding something, and I gave them Zlatan.”

LAFC had been in total control thanks to a first-half double from former Arsenal striker Carlos Vela and Daniel Steres’ own goal just after the restart.

But Sebastian Lletget pulled one back in the 61st minute and, two minutes after the introduction of Ibrahimovic, Chris Pontius struck in the 73rd.

The 36-year-old Swede then took centre stage with his spectacular 77th-minute leveller, ripping his shirt off in celebration, before glancing home the winner.

“The adrenaline starts and you don’t want it to finish,” Ibrahimovic said.

“I have a lot of pressure coming here, from the media, from the fans, from the club, from the players but nothing compares to my own pressure.”

You couldn't write a better script.