Macclesfield have gone and other clubs will follow without fans in grounds... 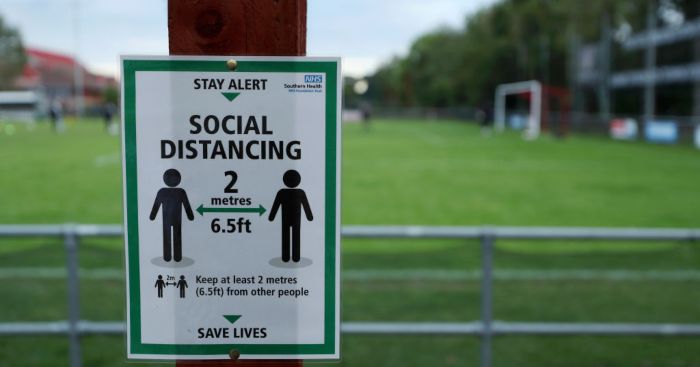 If the government values the pyramid structure of football in these lands, Football League clubs must be allowed to let fans back into the grounds next month. They must. If they do not, many clubs simply cannot continue.

80% of EFL club income comes from match-day revenue so without matches, the clubs are all but bankrupt. It gets worse. If the club isn’t playing in front of people, income from sponsors also drops off. Why get your logo in the ground, programme or shirt if no-one is going to see it?

Push has come to shove. We have reached the edge of the cliff. The money the Premier League advanced to EFL clubs in the summer has run out. That wasn’t a gift, it was just bringing forward what would have been paid in January.

There are ongoing discussions between the top flight and the Football League to potentially provide more financial support. That no such funding has yet been agreed isn’t a good sign, but if help does come, it will only be another sticking plaster.

It isn’t just a case of handing out bundles of cash to each club; it’s more complicated than that. There is reluctance to give money to clubs which have billionaire owners and can ride this period out on the back of those owners’ non-repayable loans. There is also internal tension between the EFL’s League One and Two clubs as some are perceived to already be trying to circumvent the new squad salary cap in one ‘creative’ way or another. This is something Portsmouth chief executive Mark Catlin has talked about recently.

However, while Portsmouth are owned, somewhat improbably, by ex-Disney CEO Michael Eisner and can dip into his billions to support the club, many others do not have fabulously rich owners and others see no reason to keep the business going when there is no income and no prospect of future income. They cannot continue on wishes, hopes and dreams. They need a real plan.

Exactly how many clubs are in danger is unclear. Some think it is in single figures and others that it could exceed 20.

Macclesfield Town wound up over £500k debts. They were in financial trouble before Covid-19 but the pandemic threatens future of many more football clubs. Macclesfield’s demise comes on same day that EFL will tell govt about financial imperative for fans inside grounds ASAP.

The only way to head off this crisis is to allow fans into grounds. Huge amounts of work have been done at many clubs to make sure it is as safe as possible. Trials are taking place with limited numbers. This must lead to lower-league grounds being fully open in October.

We know that Covid-19 is not as easy to catch outdoors; we know detailed plans to enforce social distancing in grounds are in place.

What more can be done? If this doesn’t happen now, when will it happen? No club, no business, can operate on bullshit and empty words. Bloviating in parliament as though it is your school debating society is of no use to us and isn’t a substitute for knowing what the hell you’re doing. Clubs need a pathway to reopening or they will just have to close down.

The chair of the National League is Brian Barwick (remember him?). The fifth tier also stands on the verge of collapse. He is obviously concerned and said this week:

“The National League restart depends upon crowds being allowed back in stadiums as live attendance is our clubs’ largest source of income. The government urgently needs to set out a credible pathway for the safe return of supporters, and to ensure our football clubs can continue to function, and to perform their significant role in the sporting life of the country.”

He wrote to the relevant minister Oliver Dowden to express his concern.

“Unlike the upper echelons of English professional football, the National League restart depends upon crowds being allowed back in stadiums as live attendance is by far the largest source of income. If a decision is made to delay or to cancel the return of fans, it is feared many players and staff may go unpaid due to the shortfall in match day income and the furlough scheme being discontinued. Furthermore, in the absence of a credible pathway for the return of spectators, it is feared that clubs could suffer severe economic hardship, and that community assets may fall out of use.”

But is the government actually doing anything? It feels like their hands are off the wheel when it comes to football. Does it have any clue whatsoever? After all, Dowden is the man who said “the national morale” would be improved by the return of football of the Premier League on TV. That was just statistically wrong but sounded very like the sort of propaganda the Premier League would love a government minister to say. So we can’t rely on him as a font of all sense or reason. The best we can hope for is he gets out of the way.

He is said to be working on a ‘Operation Sleeping Beauty’ to get audiences into indoor live events. If that is possible, outdoor sporting events must be even more possible.

However, we know ‘working on’ can be weasel words for ‘not doing anything but pretending we are’. We must be aware that government ministers are proven liars and literally anything any of them say is quite possibly another lie, wrong, untrue or just ignorant.

Dowden is meeting sporting bodies today. It must be hoped that he lets the grown-ups make the correct decisions and the EFL can follow its route to return fans to grounds. If he doesn’t, we will know who to blame for the collapse of our precious football pyramid. If he doesn’t want the rubble of a great national asset to be his only legacy, if he doesn’t want to go down in history as the man who could have saved lower-league football but chose not to, he must allow the return of fans under socially distanced rules next month.