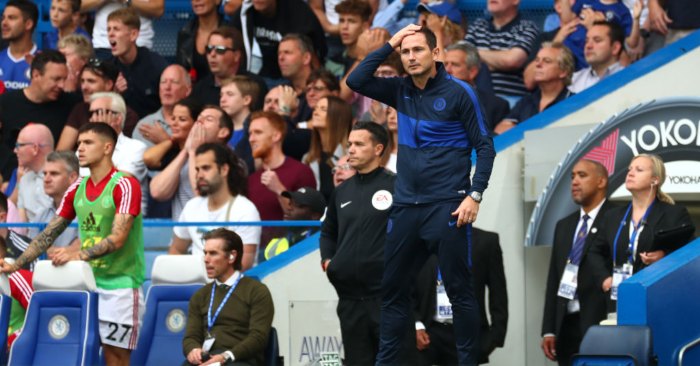 “For his first job in the Premier League, Frank Lampard is doing a fantastic job.”

It was such an astonishing statement from Tim Cahill on Match of the Day that it prompted a rewind and a Twitter search to confirm that he had indeed said that the manager whose only victory in his opening four games had come against a newly-promoted side, whose team had somehow been shellacked 4-0 by an achingly mid-table Manchester United, and who had that day overseen a capitulation at home to Sheffield United was doing a “fantastic job”.

Five points from four games. Four points thrown away from winning positions. Nine goals conceded – a record only ‘beaten’ by the Norwich side they narrowly vanquished. Fantastic job.

Were Cahill alone in this assertion, we could dismiss them as the ravings of a man who has headed too many balls pumped forward from Phil Jagielka, but it was said after two defeats that he had done enough to secure a long-term deal, and on Monday, Paul Merson was calling for the new manager to be given time while suggesting that a top-four finish would make him manager of the year. On Tuesday, Martin Keown was arguing in the Daily Mail that Lampard ‘has demonstrated he can get good performances out of young players’. We knew Lampard would get an easier ride than any of his predecessors – he’s young, English and likeable – but this is bordering on the ridiculous.

Lampard may well become a brilliant manager for Chelsea, but he has not yet done anything to suggest that is the case. To pretend otherwise is wilful propaganda. Yes, he has lost Eden Hazard. Yes, he has been hamstrung by a transfer ban. But he has still taken over a side that finished third in the Premier League and led them to a series of incredibly disappointing results, the worst of which came on Saturday against Sheffield United. The current Europa League holders did not fail to beat the Blades at Stamford Bridge because they have lost Hazard and only had a £58m winger to replace him; they failed to beat the Blades because they are defensively suspect and they made some poor decisions, their manager included.

But that manager named the youngest Chelsea starting XI in Premier League history so he is doing a “fantastic job”. He is promoting young English players like Tammy Abraham so he is displaying ’emotional intelligence’ (the gist of the fawning article in The Athletic that followed that crumbling against Sheffield United). As the man himself said on Saturday: “The emergence of youth is one thing but winning games is another. When you are 2-0 up at half-time you should win the game.”

Indeed you should. Which really should lead to difficult questions about why Lampard brought on an 18-year-old midfielder for his debut when Chelsea were clinging on to a 2-1 lead and the Blades were in the ascendance. “People can say what they want but I wasn’t trying to be clever at 2-1, I was trying to see the game out,” said Lampard, but the problem is that Chelsea pay him to be ‘clever’ as well as ’emotionally intelligent’, and that substitution was either incredibly naive or an attempt to control the narrative. We presume the former.

I don’t care how gassed people were about bringing in Gilmour it was an awful decision by Lampard. Sheffield were pressing and Kovacic was perfect for that situation.

Lampard claims it was a ‘one for one’ substitution because Mateo Kovacic was “on his haunches” but Billy Gilmour would not have been the choice of any other coach in that situation; anybody else – not just the defensive Jose Mourinho – would have brought on Marcos Alonso or Andreas Christensen with instructions to shore up midfield. And the already familiar refrain that “the squad is what the squad is” would elicit more sympathy if they had not sent 27 players out on loan.

There is little doubt that Mason Mount has thrived under Lampard – both at Derby and at Chelsea – but the skills he is passing on are his own. He can coach those late runs into the box because he was king of late runs into the box. And he can improve Abraham’s finishing because he was a supreme finisher who believed that repetition and hard work were the key to success, though the jury remains out on a player who had long since proved he can score against Championship defences. But can Lampard improve that defence? Can he somehow instil them with the tools to avoid second-half capitulation? Can he himself make game-changing or game-saving substitutions?

And can we try and discover the answers to some of those questions before we crown him as a great Chelsea manager? Or is that too much to ask as we watch him easily clear the lowest bar in Premier League history?