Home F365 Features Farewell, to the greatest women’s player of them all: Marta 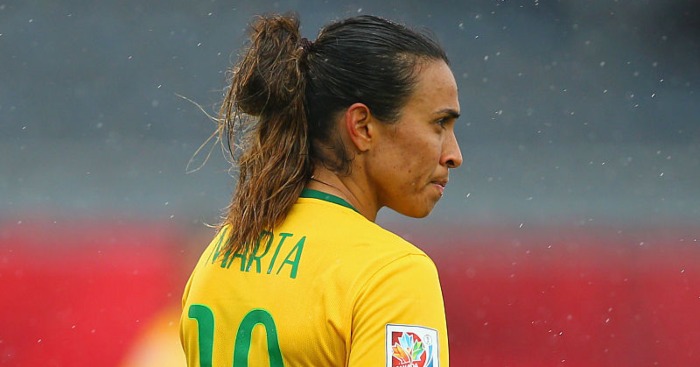 On 27th September 2007 – a warm, muggy night in Hangzhou, China – a USA side sauntered into the Dragon Stadium on the back of a 51-game unbeaten run. 51 games. More than your average domestic football season, more than The Invincibles managed – and this was an international side. Almost three years of swatting aside anyone in their path and countless successes before that, including the 2004 Olympic title and two World Cups in the decade before.

On the other side of the ledger were Brazil who, much like their male counterparts in recent times, feared crumbling under the immense weight of domestic expectation. A country that has had every reason to consider itself the best, and one where despair at the fortunes of the national side can spread like wildfire. Thankfully for the Seleção, however, today would not be one of those days.

A Leslie Osbourne own goal, and a red card for midfield powerhouse Shannon Boxx, left the USA in a precarious position as they traipsed into the changing rooms at half time 1-0 down. US coach Greg Ryan had decided, to confusion beforehand and vehement anger after, to drop young goalkeeping starlet Hope Solo, replacing her with experienced veteran Briana Scurry. If Osbourne’s own goal, an inadvertent looping header into her own net, was one that Scurry could’ve dealt with, then Brazil’s fourth was in brutal, beautiful contrast.

Marta Vieira da Silva had already scored six goals at the 2007 World Cup. As she received the ball on the edge of the box, with her back to goal, USA defender Tina Ellerston must have wondered what she’d done in a past life to deserve the task of shutting down the greatest female footballer to have ever lived. With the ball suspended in mid-air from Marta’s first touch, Ellerston seemed locked in perennial, agonising doubt. The ball drifted up, she stood off. The ball dropped back down, she pounced.

But Marta, with coiled spring legs and a matador’s instinct, was already gone. With her next deft touch, she flicked the ball over her shoulder and had spun round Ellerston before she had taken her first step. Marta surged into the box. The American’s cynical tug at the sacred yellow and green jersey seemed an affront to the footballing deity, for which her team was then punished accordingly.

Cat Whitehall, a ten-year, 134-game veteran, was the next defender to step into the ring. Faking to shoot with her left, Marta knocked the ball to the side of the US defender with an almost bitter nonchalance – disinterested, almost rude. By the time Whitehill has fallen over the wrong way and propped herself back up, the inevitable has happened. Marta slid the ball under a now distraught Briana Scurry and cemented herself as one of the game’s greatest ever stars.

Perhaps the joga bonito mantra flows the richest through those who carry the number 10, and the expectation that brings, on their yellow and green shoulders. Zico, Pele, Ronaldinho, Rivaldo, Kaka – and Marta. Captivating footballers whose will is to entertain as much as it is to win. With every elastico, stepover, feint and pirouette, she treads the same path as those elite superstars from the men’s game, dragging swathes of Brazilians to women’s football in the process.

Huge audiences tuned in to watch the 2007 World Cup, as they hoped to see her emulate her success in the Pan-American games from a few months earlier. She netted five against Canada, won that tournament, was the tournament’s best player, and was the first woman to be honoured in the Maracanã’s mythical Walk of Fame.

Her journey, like many Brazilian legends, had humble and difficult beginnings. She was born in Alagoas, the least-developed state in the country. It ranks in the bottom two states for illiteracy, child mortality rates, income per capita and life expectancy. If the economic situation didn’t serve as a guiding light on the road to success, then the political landscape proved even worse. From 1941 to 1979, it was illegal for women to play football in Brazil. Even once legalised, the discrimination suffered by Brazilian women playing football was still common. In an interview with Folha de São Paolo, Marta noted how “people at that time did not look kindly upon a girl playing football with a load of boys, and my family thought the same way”.

After two years at Rio’s Vasco da Gama, she took her nation to fourth place in the 2002 U19 World Cup whilst playing an amateur side Santa Cruz, in Minas Gerais. A senior cap soon followed and, a year later, she was the standout player in Brazil’s victory at the 2003 Pan-American Games. Her stock soared and, combined with flashes of brilliance in the World Cup in the USA later that year, she earned a move to Swedish side Umeå IK as the first Brazilian woman to play professionally in Europe.

At her peak, she was utterly unplayable. A blazing onslaught of pace, trickery and a thunderous left foot. Watching footage of her playing at the 2007 Pan-American Games in Rio, where Marta scored 12 goals in six games – five against Canada alone – is like watching a shark hunt down wounded and terrified fish, all snarling teeth and stepovers.

A sad feature of Marta’s illustrious career has been her need to seek new opportunities when women’s teams need to fold, often due to being underfunded. After finishing as top scorer in the inaugural Women’s Professional Soccer League in the U.S. with new outfit LA Sol, she was loaned to Brazilian side Santos. She won both the Copa Libertadores and the Copa do Brasil, scoring a wafted, beautiful free kick in a 9-0 win against Universidad Autonoma in the Libertadores final.

But, upon returning to Los Angeles, she found the club had folded. Then, whilst on another loan stint at Santos, her new team – FC Gold Pride, in Santa Clara – folded as well. After leaving Santos, the club announced they were closing down their women’s football operations to fund a contract for Neymar. If ever there was a stark illustration of Brazil’s comparative disregard for women’s football, here it was.

Stints with Western New York Flash and Tyresö FC both ended in more bankruptcy, and she now plies her trade in the newly-formed NWSL. But, for all this uncertainty, Marta endlessly hunted down record after record: 110 international goals, 15 World Cup goals, and six FIFA World Player of the Year awards.

Of course, all of these records would likely pale into personal insignificance if Marta could lift this summer’s World Cup with Brazil. The Seleção is in a poor state, having not won in nine pre-tournament games. Marta arrived at the tournament with an injury that some fear will rule her out of more than just Brazil’s opening fixture. A fantastic hat-trick from Marta’s strike partner Christiane gave them a 3-0 win over Jamaica, but with Australia – one of the pre-tournament favourites – in their group, the path to glory in probably Marta’s final World Cup looks a difficult one.

At The Match is back and heading to the #FIFAWWC

Join @andybrassell in France as England take on first-time finalists Scotland. Deborah Dilworth of @The_FSF discusses her preparations in the lead up to this historic tournament.

There are many lessons to be drawn from Marta’s illustrious and nomadic career. First, is that she is among the select few who have dragged the women’s game into the public consciousness through her unbelievable talent and high profile. Harking back to the glorious fleet-footed nature of her predecessors in the men’s game, from Garrincha to Ronaldinho, her technical skill and goalscoring feats helped spark an interest in women’s football wherever she played.

Not only that, it opened the minds of young women wanting to play the game, and those watching on in the stands and the dugouts. Through her pioneering success, Marta helped shape the next generation of prodigious talents by showing them what was possible.

And yet, she was let down by the structure and societal view of the women’s game in her era, as this era draws to a close. Six of the clubs she played for now no longer exist, due to a lack of financial support. Thankfully, this is becoming less prevalent, as expansion and investment in a range of women’s professional leagues, including the Super League in England and the 300 professionals now playing in Brazil.

Misogyny followed Marta throughout her career, just as it has for countless either professional women. Marco Cunha, the football coordinator of Brazilian football, put the increase in popularity of the women’s game down to players wearing make-up and shorter shorts.

Clearly, there is still a depressingly long way to go for women’s football to become a societal and professional equivalent of the men’s game. But, thanks to players like Marta, the game is a lot closer to that point that it otherwise would be. With her talents soliciting shouts of incredulity and shrieks of delight for nearly two decades, a generation of young girls will be inspired to try and do the same. And that’s worth more than any World Cup triumph.