Home All The News Farke, Hasenhuttl react to Southampton win over Norwich 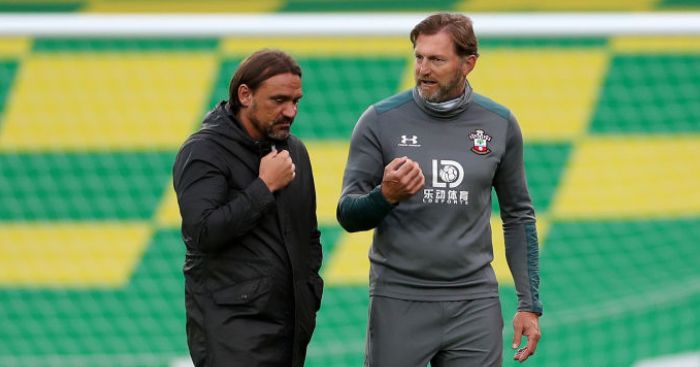 Daniel Farke admits that Norwich lost confidence due to the speed at which they conceded goals against Southampton.

Norwich were already facing an uphill battle for Premier League survival ahead of their return to action,  and the task became even harder after they fell to a 3-0 defeat at home to Southampton.

The game was goalless at the break, but a quickfire start to the second half saw Southampton two goals to the good within 10 minutes of the restart.

Norwich were unable to recover, and their former player Nathan Redmond compounded their misery late on – to confirm they would remain six points adrift of safety.

But the damage had been done long before that, as Farke admitted that the two quick goals damaged the Canaries’ mentality.

“To concede two goals that quick in the second half was of course a defining moment in terms of confidence,” he told BBC Sport.

“We had setbacks we had to accept. The confidence was not there.

“It’s important that you are effective. The situations before the two goals were ones you should not concede.

“We were just not willing enough to follow the movement.”

Meanwhile, Southampton boss Hasenhuttl praised his side’s aggression as the turning point in the match.

“The start was not perfect,” he admitted. “We had a few problems in the beginning but after that we won more duels and had better aggression. That was the key.

“In the second half we were more clinical and it was a deserved win from a very fit team.

“Danny Ings is a fantastic finisher when he is around the box. He is working very hard for the team.

“The key was our work against the ball. When we are pressing together it is not so easy to play against us.”