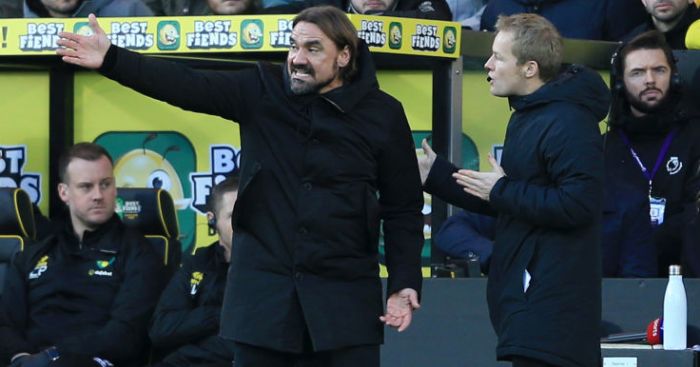 Norwich head coach Daniel Farke has said that a “world-class” display from Arsenal goalkeeper Bernd Leno prevented his side from claiming all three points against the Gunners on Sunday.

The Canaries took the lead twice through Teemu Pukki and Todd Cantwell – with both goals coming in the first half – but the hosts were pegged back on each occasion by Pierre-Emerick Aubameyang’s brace.

Norwich were much the better side in the final period of the game and had several chances to snatch a winner, with Leno making crucial saves throughout to keep the scores level.

Speaking to Sky Sports after the match, Farke was nevertheless delighted with his side’s overall play.

“It was a great performance – we delivered what we wanted to do,” the manager said. “I’m disappointed to some extent – we should have got three points.

“Some of that was due to a world class Bernd Leno. Four points from two games is quite good.”

Arsenal’s first goal came after Aubameyang was forced to retake a penalty – which was saved by Tim Krul – for encroachment in the area.

Farke said he was “really unhappy” with VAR’s involvement in the game, adding: “To be honest I was really unhappy with the quality of decisions during this period.

“Each and every 50-50 was against us. Out of a free-kick for them it led to a penalty. It probably was a pen then a great save by Tim.

“Then VAR reviewed it. To repeat this pen you’ll probably find something in the rules. In second pen the head of lacazette was probably ahead of the kick, but that wasn’t reviewed.

“Then the ball was on the pitch for the second Arsenal goal and that wasn’t reviewed. It’s not up to me to judge VAR – when the foot is inside the box and another part is outside you shouldn’t replay the penalty.

“Four points out of two games is quite good. It was possible to get six from two but we take a lot of encouragement.”

The result leaves Norwich on 11 points, four adrift of safety in the Premier League table.

Their next fixture sees them take on 17th-placed Southampton – who are a point ahead – in a crucial tie on Wednesday.

As for Arsenal, they host Brighton on Thursday, with the Seagulls occupying 17th following their 2-1 defeat to Liverpool on Saturday.