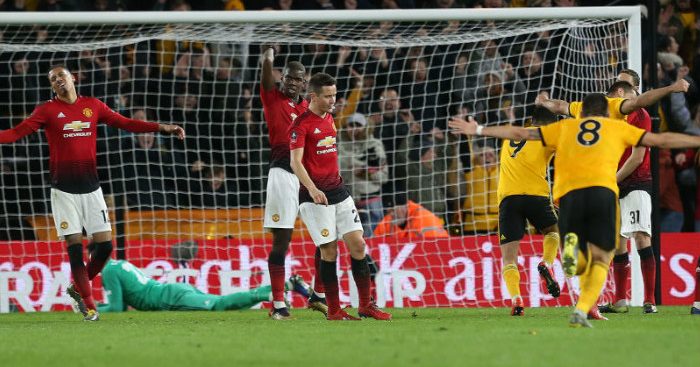 Two-one was flattering. Wolverhampton Wanderers were dominant throughout the game, to the extent that the question was never really one of whether Wolves could deal with United, but whether Ole Gunnar Solskjaer could answer the many questions their hosts posed them. It took 70 minute for them to find the breakthrough, but it had been coming all night.

Not that this was ever going to be an easy game. Wolves are fearsome enough already that it is almost unbelievable that they are a newly-promoted side – it took a certain courage in my own convictions not to whip open a new tab and double-check they weren’t, saw, promoted two years ago and finished 11th last year or something.

Nonetheless, Manchester United were not up to scratch. They were once again strangely damp in attack and vulnerable in defence in their second successive defeat, relying on some wasteful finishing from Diogo Jota and a wonderful save from Sergio Romero to keep Wolves from being out of sight before an hour had elapsed.

The front three of Jesse Lingard, Marcus Rashford and Anthony Martial were made to look pedestrian by a well-drilled Wolves defence, while Paul Pogba was again asked to do too much alongside Nemanja Matic and Ander Herrera in the midfield three.

This may just be a touch of a metaphorical hangover after three months of partying with their new Norwegian hype-man, but slowly but surely, a few of the old problems are seeping back in to their play.

The chronology of events will inevitably play a large part in our assessment of Solskjaer’s efficacy, in what I have previously termed the Roberto Di Matteo effect: a halting but gradual ascent is oddly often better for a new manager’s reputation than a meteoric rise followed by a harsh comedown. For the rest of the season, he and United will likely be judged against the standards they set for themselves in from late December to February, rather than the much lowlier level they were at under Jose Mourinho.

As the statisticians would suggest, the truth of their situation lies somewhere in between the two extremes, and in isolation, this match may prove to be nothing to worry about as they continue to pick themselves up from a damaging and demotivating start to the season. It is only fair to judge a manager by looking at what they took over against where they have got to.

I do not buy entirely into the idea that lucky wins are worth nothing in the longer term – any sports scientist will tell you about the enormous benefits confidence confer on performance, and human emotions do not behave so rationally as to take heed of rational factors like xG difference – but it is undeniably true that United’s results have outstripped their performances on several occasions in recent weeks. As entirely understandable it was for United fans to defend their fun new manager after five and a half years of largely miserable football, that was always going to catch up to them at some point.

For as long as the word ‘caretaker’ remains on his job title, people will question whether Solskjaer is the right man to take Manchester United into the future. We have pretty firmly pitched our tent in the ‘yes’ camp, and we feel entirely justified in standing by that. As Manchester City showed even in victory earlier in the evening, no football team is completely at it in every single game they play. What will be interesting, though, is to see what steps Solskjaer takes to resolve some of those issues, particularly now that he knows his squad well enough that he should feel confident getting a little more experimental.

For Wolves: none of their potential opponents in the semi-finals and the final should present them any reason to be fearful, Manchester City included. Like Watford, this is a side that can afford to dedicate all their energy and all their biggest efforts into chasing a piece of silverware. Having one of English football’s most in-form strikers of 2019 in Raul Jimenez (seven goals in his last eight Premier League appearances, three goals in five FA Cup matches) certainly doesn’t hurt.

More importantly in the bigger picture, their performance against United was the latest piece of evidence that Wolves are the side most likely to turn the big six into a big seven in years to come. Whatever you think of their methods in the transfer market, that is remarkable.

United’s own future remains less clear cut. They have shown enough since Solskjaer’s arrival to suggest they are capable of returning to something like their Ferguson-era selves with a few right decisions, a bit more development, and a few savvy upgrades on the current playing squad, but so too have they shown that those upgrades are an absolute necessity, rather than an optional extra. Perhaps Wolves’ cohesive thinking can help inspire them.