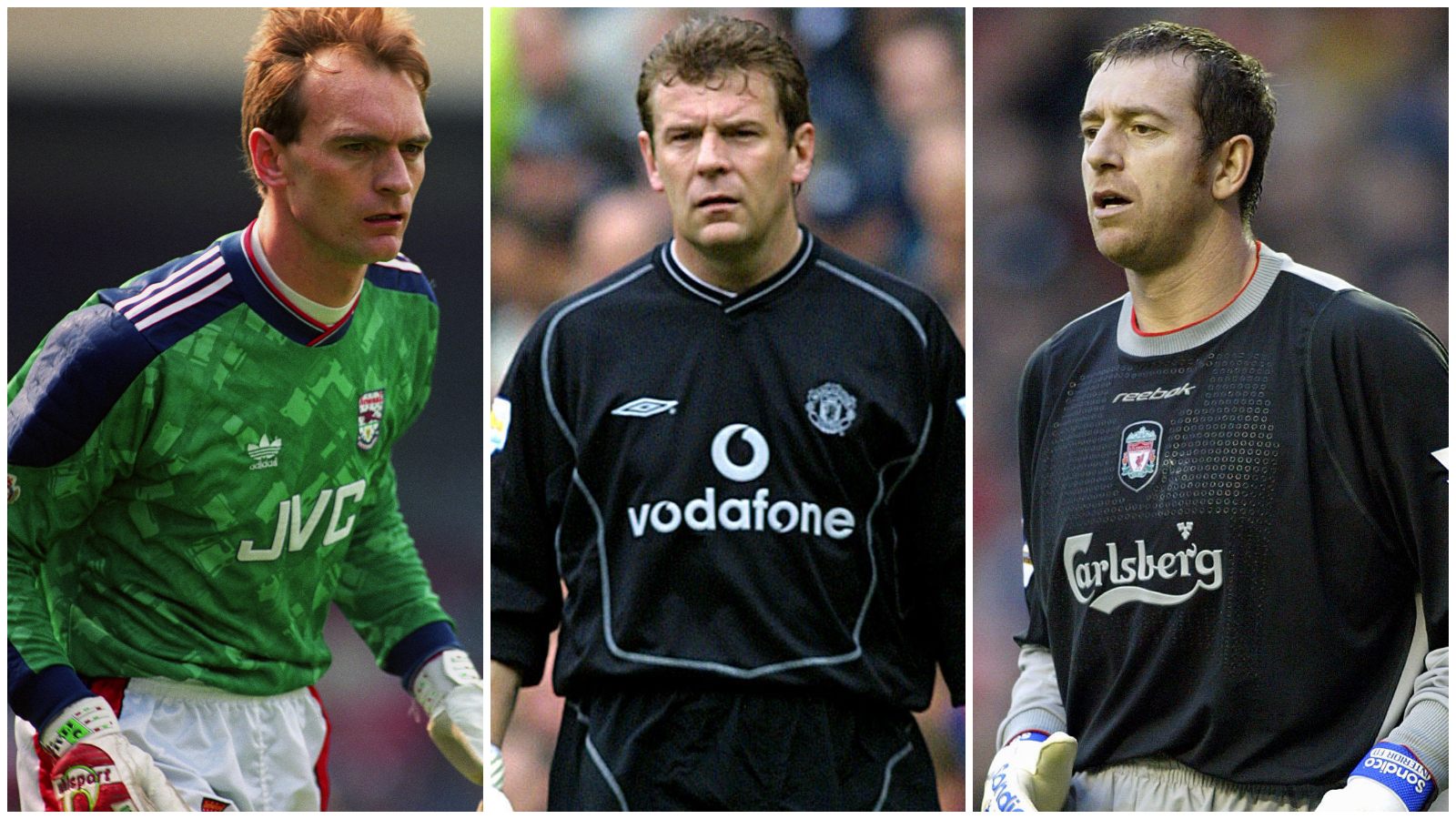 With the sad news of the death of former Manchester United stopper Andy Goram (he played a bit at Rangers too…), we’ve reminisced over 10 keepers who became unlikely signings for the big clubs. Some became heroes; some made cameos; and some just hung around a bit…

Les Sealey – Man Utd
Nobody could have predicted what would happen when Sir Alex Ferguson signed the 32-year-old back-up keeper on loan from Luton Town in December 1989. It was the same month that the infamous ‘Three years of excuses and it’s still crap. Ta ra Fergie’ banner was unfurled on the Stretford End. Six months later, after only two First Division appearances, Sealey was thrust into the spotlight for the FA Cup final replay against Crystal Palace after Ferguson dropped Jim Leighton.

Palace players thought this new keeper could be rattled. They gave him plenty of stick in the tunnel – “Being a profound and deep-thinking person, I told them to f*** off,” said Sealey – and tried to break him, literally, on the pitch. It didn’t work. Sealey was flawless in victory, and Ferguson was off and running.

Sealey kept his place the following season, when he kept goal during United’s 2-1 win over Barcelona in the European Cup Winners’ Cup final. He played in Rotterdam with a heavily-strapped knee after receiving a deep cut during the League Cup final a few weeks previously. It penetrated through to the bone but Sealey made it absolutely clear he wasn’t going off. He hobbled through the last 12 minutes before collapsing in the airport heading back to Manchester. The wound had become infected and, had he got on the plane, doctors believe he would have lost his leg, and perhaps even his life.

Sealey left United upon Peter Schmeichel’s arrival but he returned to Old Trafford barely a year later to offer cover again, winning a couple of Premier League titles and the FA Cup as substitute. He made only a couple of first-team appearances during that second spell, meaning his final four games for United were a League Cup final, European Cup Winners’ Cup final, FA Cup quarter-final, and another League Cup final.

Jim Leighton – Arsenal
After being unceremoniously dropped for Sealey at the end of his second season at Old Trafford, Leighton saw his Manchester United career hit the skids. After Wembley, he played only once more for the Red Devils, against bottom-of-Division-Four Halifax Town at the Shay in the League Cup.

Leighton had slipped to fourth choice behind Sealey, Gary Walsh and Mark Bosnich. “Everything went seriously south for a while,” he told The Scotsman, so when Arsenal needed emergency cover towards the end of the 1990-91 season, Leighton packed his gloves and headed to London.

“It was the best club I have ever been at,” he reflected, despite never playing a competitive game for the Gunners. “The team spirit amongst the players, I have never known anything else like it. At the end of the season, George Graham came to me and said: ‘We are going to Singapore for a week. As a thank-you for what you have done we’d like to take you away for a week’s holiday’. I said: ‘done you a favour? You have taken me away from United, where I could not get a game for the Under-11s’.”

Paul Jones – Liverpool
It was January 2004 and Gerard Houllier had his two senior keepers, Chris Kirkland and Jerzy Dudek, on the sidelines. Frenchman Patrice Luzi was his only fit stopper.

Jones, 36, had fallen behind Annti Niemi at Southampton when he got a call from Gordon Strachan asking him to mull over a loan move to his boyhood club.

“It was too good an opportunity for me to turn down and I know I’d have regretted it for the rest of my life if I’d not come here. Whether I play one game, two games or whatever, I am just relishing the chance to play a part here. I’ve been a Liverpool fan all my life so to be here really is a dream for me.”

Jones featured in two games – a win over Aston Villa and a defeat at Tottenham – to become Liverpool’s oldest post-war debutant.

Fraser Digby – Man Utd
The keeper best known for over 420 games for Swindon started his career as an apprentice at Manchester United before leaving for the County Ground as a 19-year-old.

He was back six years later, however, when United needed cover for Peter Schmeichel so Digby, who had been dropped by Glenn Hoddle at Swindon, was asked to return to Old Trafford. “I said, ‘I’ll start walking now!’,” Digby recalled with The Washbag. “You go from rock bottom and being dropped to then having the opportunity to go up to United and work with the players there. Working with Peter Schmeichel was probably the best two months I’ve had in my whole career. It helped me out in a phenomenal way.”

Digby was one of two signings United made in November 1992. The other: Eric Cantona.

Stuart Taylor – Man City
The founder and life-long president of the back-up keepers association was a Premier League player for the vast majority of an 18-year career. In that time, Taylor has made 32 top-flight appearances, playing for 12 different clubs without costing a penny in transfer fees.

Taylor, who finished his career at Southampton, made over half of those Premier League appearances as a youngster at Arsenal but he won the title as third-choice stopper at Manchester City in 2012, despite having already been released by the club two years previously.

Andy Goram – Man Utd
Rangers legend Goram told the story in his autobiography of how he joined United from Motherwell in March 2001 on a three-month loan.

“When I had three months of my contract left, they let it be known that I wouldn’t be offered another one. I was knackered. Miriam and I were together at the time and she was driving me to training one day when my phone rang. Coisty. It was 9.30am and I thought he must be coming in from a night on the batter. Ally never phones you in the morning. We blethered, and I shrugged it off and went into training.

“At lunchtime on the way home the phone rang again. Walter Smith. He was manager of Everton at the time and warned me to keep my phone on because someone was going to ring me. ‘What is it, gaffer? You got a job for me?’ I asked. ‘Just keep your f*cking phone on,’ he growled. Now I was starting to wonder what was going on. I suspected I was about to get the piss taken out of me.

‘Two minutes later, the phone rang again. ‘Goalie, it’s Alex Ferguson here. We’ve got Bayern Munich on Wednesday and Liverpool at the weekend. Fabian Barthez is injured and Raimond van der Gouw is struggling. I need you to come down on loan until the end of the season.’

‘I said: ‘Coisty, f*** off’. And put the phone down. Ally could do Sir Alex perfectly. I wasn’t falling for that old one. The phone rang again and I told Miriam to answer it this time. ‘Miriam, this is Alex Ferguson, and you can tell that fat b*stard he’s got ten seconds to say aye or naw.’’

That fat b*stard never featured against Bayern or Liverpool but the 37-year-old did play two games during United’s run-in.

Alex Manninger – Liverpool
The Austrian keeper is best remembered in this country for four seasons at Arsenal where he served as back-up to David Seaman. In that time, Manninger kept six consecutive clean sheets – a joint club record – to help the Gunners overhaul Man Utd in the 1997-98 title race and win the Double.

Manninger played for 12 clubs in four countries before the then-39-year-old was invited to train with Liverpool during pre-season in 2016. Jurgen Klopp was impressed enough to offer the veteran a one-year contract to serve as cover for Simon Mignolet and Loris Karius.

He didn’t feature in the first-team during his year at Anfield, after which he hung up his gloves and considered becoming a joiner.

Mark Schwarzer – Chelsea
Chelsea wanted John Ruddy to sit on their bench in 2013 but Norwich rejected offers of £5million and £6million, waiting for a bid closer to £10million. It never came because the Blues picked up Schwarzer for free.

The Australia stopper had been released by Fulham but aged 40, he still had eyes on playing in the World Cup in Brazil the following summer. Aged 41, he became the oldest player to debut in the Champions League and the oldest player to represent Chelsea in the Premier League. Schwarzer signed for another season, despite the return from loan of Thibaut Courtois, but he left mid-season to join Leicester.

Schwarzer didn’t manage a league appearance at the King Power but he did become the Foxes’ oldest ever player and became the first player since Eric Cantona to win consecutive titles with different clubs.

The former Germany keeper had been retired for nine months when he was offered a rolling contract with the club where he had made 199 appearances between 2003 and 2008. His 200th came in a 3-1 win at Blackpool after Almunia had been injured in the warm-up. It made Lehmann the oldest player to represent Arsenal in the Premier League.

Rob Green – Chelsea
“I go to all of the meetings, do all of the pre-match, do the warm-up and help in every way you can, whether it is collecting balls, saving shots or crossing balls in. Then, when the players are ready to come out on to the pitch, you are getting changed and more often than not at away games I find a cup of tea and go and sit in the stand.”

At 39, there were certainly worse ways to spend your weekends. Then after a year supping brews while watching the others graft, the former England stopper made the most wonderful exit…

🔊 “I’ll never forget the look on Willian’s face. He just looked at me and said, ‘What are you doing here!’”

This is the Rob Green story, the hero of Baku… 💚 pic.twitter.com/2bKffuIKDo