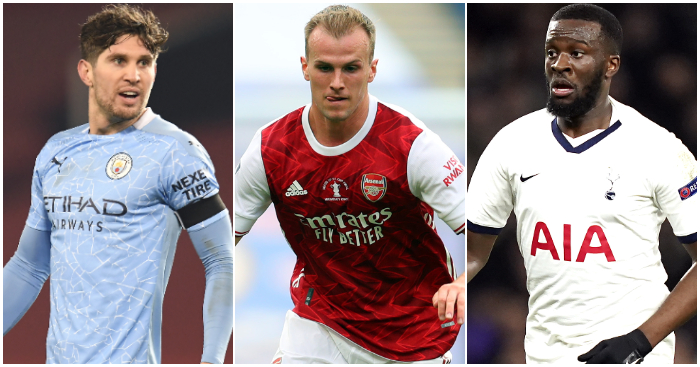 John Stones is good again. The Manchester City defender looked finished at the Etihad, with Pep Guardiola handing him just 12 Premier League starts last season despite being short on specialist centre-backs. He lost his England place and Stones was making more headlines off the field than on.

Now, though, Stones is back on Pep’s good side and forming a formidable partnership with Ruben Dias on City’s march to the title. He’s not the only player to pull himself back from the brink this season…

Rob Holding
It got so bad for Holding that he looked all set to join Newcastle. But the centre-back has become a mainstay of Mikel Arteta’s team this season, starting the last seven matches and even briefly wearing the captain’s armband. That’s 13 starts in 17 games.

Nine starts or 12 appearances overall was his previous best in the Premier League in four seasons at the Emirates. Injuries haven’t helped but even Holding had apparently accepted that it wasn’t going to happen for him at Arsenal. But injuries to other centre-backs gave the 25-year-old an unexpected opportunity which he has seized with both hands.

Holding’s mental resilience wasn’t lost on Arteta while the defender was one the sidelines. “He strands for everything we want at the football club,” said the Arsenal boss earlier this season. “He had a really difficult time but he trained and pursued his dream to play for this football club.”

Now, having not long ago been mentioned among the names Arsenal are looking to shift off the books, Holding is reportedly set for a new contract, even though his current terms don’t expire for another two-and-a-half years.

Aaron Cresswell
“Invaluable” is how David Moyes described Cresswell recently. Prior to this season, West Ham fans would have taken issue with that. As they might about anything Moyes said or did. But the manager too has changed a few opinions in east London.

Cresswell would have had many offers of a lift away from the London Stadium last summer but the 31-year-old stuck around. His renaissance this season has been helped by a tactical shift which saw Moyes operate with three at the back. Playing on the left of that defence allowed Cresswell to rediscover some form while covering for his fading pace.

Despite moving more centrally, alongside the similarly rejuvenated Fabian Balbuena and Angelo Ogbonna, Cresswell has been one of the Hammers’ most creative forces. Only eight players in the league have more than his four assists, while Cresswell has made more key passes than Harry Kane and the same number as Trent Alexander-Arnold and James Rodriguez.

Moyes has shifted back to a four-man defence, with Cresswell replacing the crocked Arthur Masuaku at left-back. It will be interesting to see how his form holds, but his performance at Everton last week, when he pocketed Richarlison while attempting more shots than anyone else, was an extremely positive sign.

Most chances created by a defender in the Premier League this season:

Bonus stat: he hasn't even committed a foul. 😳 pic.twitter.com/CuOBTe0oR1

Nampalys Mendy
There was talk of Mendy walking away from Leicester in the summer to move to Qatar. You would not have blamed the midfielder for considering his options given how little he had played.

Mendy was signed from Nice in 2016 to replace the Chelsea-bound N’Golo Kante but he was given only four Premier League starts by Brendan Rodgers prior to this season.

The main obstacle between the Frenchman and a regular game has been Wilfried Ndidi, who joined Leicester half a season after Mendy. But when Ndidi was injured this season, the decision to sign a new contract appeared a smart move on Mendy’s part. He played in 13 consecutive games at the start of the Premier League campaign – comfortably his longest run of appearances under Rodgers.

So impressive was Mendy that Ndidi’s reinstatement to the team – previously inevitable – became a talking point. When Ndidi was fit, and not required to fill in at centre-back, he did indeed return to the XI, but Rodgers now knows  that he has adequate cover for one of Europe’s best holding midfielders.

Tanguy Ndombele
“I hope that next season, he can be fantastic because until now, it is not enough,” said Jose Mourinho back in March. The Spurs boss didn’t name the individual on his sh*t list, but having hooked Ndombele at half-time after the latest in a series of underwhelming performances, it didn’t take much working out.

It seems Jose’s tough love has had the desired effect. Despite it appearing that Mourinho had given up on the £55million midfielder, the fact he was willing to break the law during the first lockdown to train with him in a public park indicated that the manager wasn’t quite ready to write off the club’s record signing, even if he was recruited on someone else’s watch.

Ndombele’s fitness was Mourinho’s biggest concern and the fact that he hasn’t yet completed 90 minutes suggests there is work to be done as the France star continues his adaptation to the Premier League. But Mourinho is satisfied with his progress and his performances. Most of them…

“We are happy, apart from a couple of matches where his performances were not good,” the manager said after Ndombele starred in the win over Wolves. “Overall there is a big evolution. He’s a player who is performing very well and he is giving some good things to the team.”

Fred
Manchester United spent a similar amount on Fred and, initially, they received a similarly meagre return for their investment.

But Ole Gunnar Solskjaer stuck with the Brazil midfielder, perhaps stubbornly but also in acknowledgement that United would not recruit an upgrade. Fred barely featured during United’s best two spells under Solskjaer prior to this season – the manager’s initial caretaker spell, and during Project Restart – but this term, the midfielder is one of the first names on the team-sheet.

It is a far cry from being identified as United’s weak link and publicly fingered as the trigger for opponents to press. But even Troy Deeney, one of Paul Pogba’s biggest fans, would have to acknowledge Fred’s improvement. In the deeper role, he relegates Pogba to the bench.

Upgrading their engine room remains a priority for United. The feeling is that a top-class defensive midfielder would allow Donny van de Beek to play a little deeper but for now, Solskjaer is more secure with two screeners. The fact Fred is the primary choice in that role is a reflection of his improvement this term.