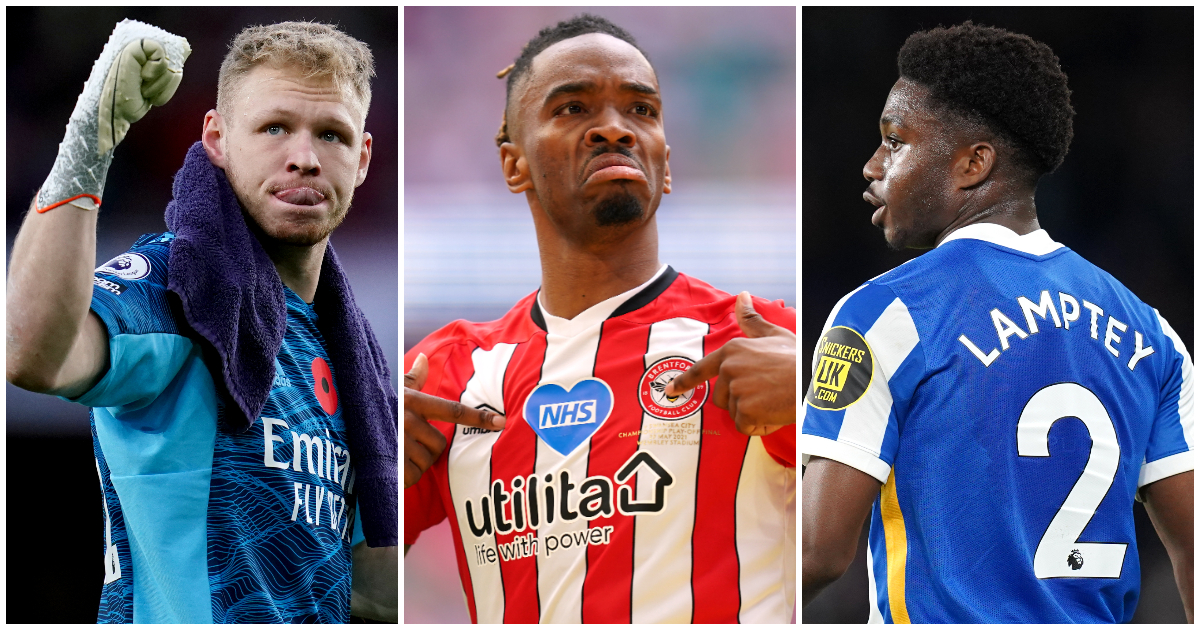 Three of the back five in this uncapped England XI is made up of former Chelsea youngsters, with another in midfield. An Arsenal duo won’t be here for long…

GK: Aaron Ramsdale
Ramsdale went to the Euros by default as England’s fifth choice but his form for Arsenal has undoubtedly shunted him ahead of Dean Henderson and up alongside Sam Johnstone. His save from James Maddison’s free-kick against Leicester alone is worth an England cap. We always knew the 23-year-old was cheap at £30million. Honest…

RWB: Tariq Lamptey
Had the Brighton wing-back not been injured back in March, he would have been in contention for the Euros. Now he’s back and flying up the Seagulls’ flank, a first cap is surely only a matter of time, even in a ridiculously crowded field of right-backs. The furthest perimeter upon which stands Manchester United’s £50million uncapped defender.

LWB: Matt Targett
There isn’t the same strength in depth on the left flank, and most of what talent there is has already been capped. Targett was reportedly close to joining that bunch of lefties back in March, when Gareth Southgate was said to be impressed by his ‘consistent season and the way he links up with Jack Grealish’. But the call never came and Targett’s form for Villa this season hasn’t exactly bolstered his international hopes.

CB: Ezri Konsa
Villa fans will feel Konsa has an even stronger case than Targett for selection. While Tyrone Mings continues to be called up by Southgate despite being dropped by Dean Smith for his last home game in charge at Villa, Konsa is still ignored, despite his fine form through the opening months of the campaign and back into last season. With Southgate preferring instead to look at Fikayo Tomori, the Villa centre-back could switch allegiance to Portugal.

CB: Trevoh Chalobah
If Southgate was picking his centre-backs on current form alone then Harry Maguire and Tyrone Mings would be having the weekend off – John Stones and Conor Coady haven’t had great starts to the season either – and Chalobah would be prepping to face Albania and San Marino after seizing his chance at Chelsea. The Blues defender is currently Whoscored’s highest-rating centre-back in Europe’s top five leagues.

CB: Marc Guehi
As a Premier League regular and captain of the Under-21s, a senior call-up is the logical next step for the Palace centre-back. Since joining the Eagles from Chelsea for £18million, Guehi has been an ever-present for Patrick Vieira, one of the Premier League’s 1000-minute men and few could deny that he deserves a chance alongside fellow 2017 Under-17s World Cup winners Jadon Sancho, Phil Foden, Emile Smith Rowe and Conor Gallagher. Speaking of whom…

CM: Conor Gallagher
The Chelsea loanee’s early-season form at Palace has led to calls for Southgate to promote him from the Under-21s to the senior squad, but Vieira is maintaining a more patient approach. “I believe it is still too early for a call-up for him,” the Palace boss said last month. “He still has to improve. His time will come but first what he needs to do is perform on a consistent basis..” Fair point, but it surely won’t be long.

CM: Curtis Jones
“He is very capable of being an all-round midfielder,” said Under-21s coach Lee Carsley of Jones last month, which could aid the Liverpool youngster’s case for a senior call-up since Southgate has so few options to cover for Declan Rice. An eye injury means he wouldn’t have been available to fill in for Rice’s flu-enforced absence this weekend, but continued involvement in Liverpool’s midfield will mean it won’t be long before Southgate takes a closer look at the 20-year-old.

AM: Emile Smith Rowe
Southgate tried hard to resist picking Smith Rowe in this week’s senior squad but Marcus Rashford’s withdrawal, coupled with his blistering form for Arsenal, made it impossible to ignore the attacking midfielder any longer. Should England do the business against Albania on Friday night, you can expect to see caps being tossed around in San Marino on Monday night, making it highly likely that Smith Rowe will never again feature in this XI.

AM: Eberechi Eze
Fate is a cruel b*stard sometimes. Upon returning to the dressing room after knacking his Achilles in May, Eze learned that Southgate had included him in the provisional squad for the Euros. Eze might not have made the final cut but he would almost certainly have featured in the warm-up friendlies. But the Palace star is almost back and when he is, a first cap won’t be far away.

CF: Ivan Toney
Thomas Frank is ‘100 per cent sure’ that Toney will get his England chance at some point, though Southgate might want to get a wriggle on if, as the Brentford manager says, he is thinking about it. Toney, with two goals and two assists in the Premier League this season, is said to be considering his international allegiance, with Jamaica an option due to his mother’s heritage.