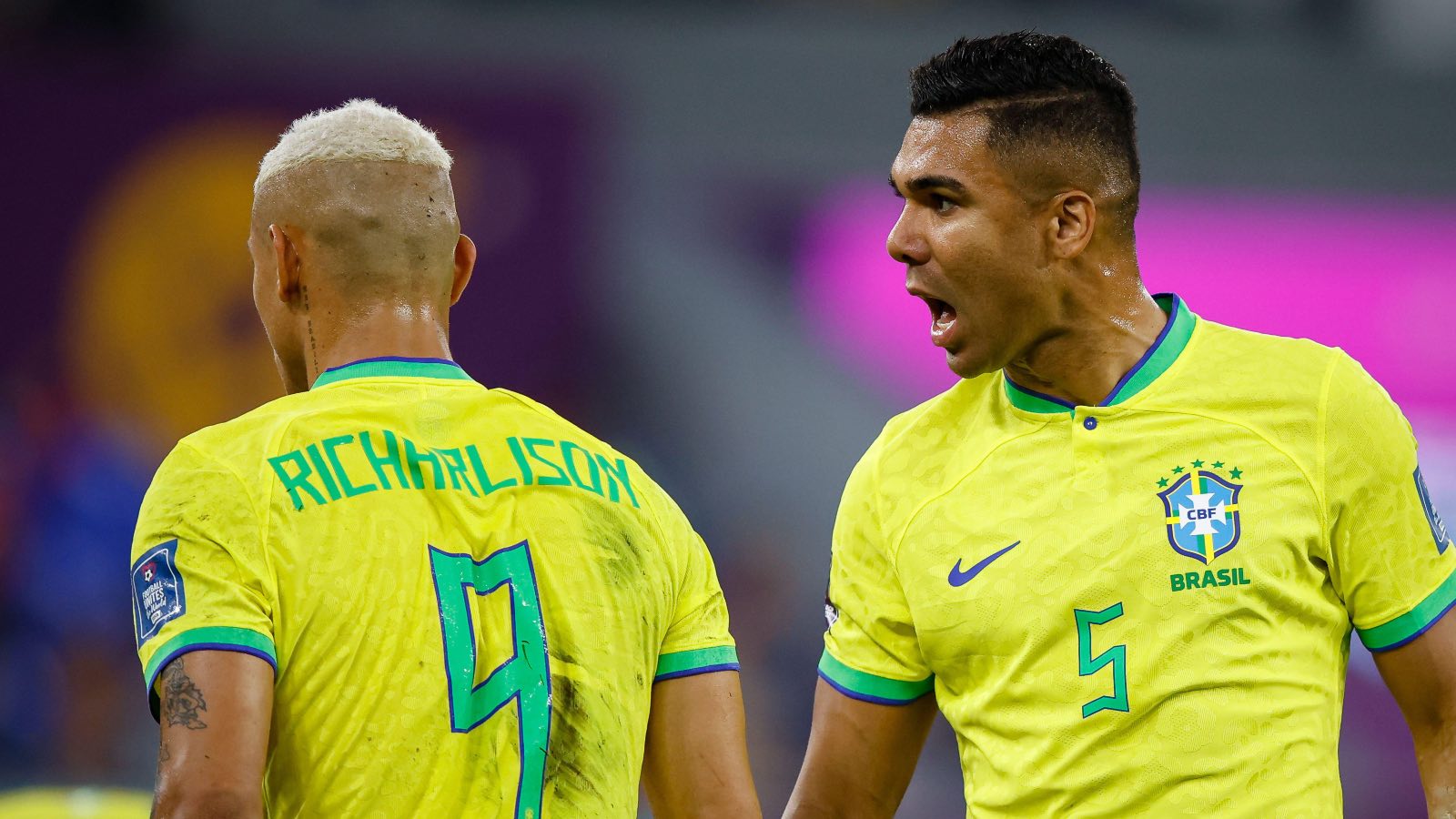 Manchester United players dominate this XI of the best World Cup stars to hail from the Premier League, while Manchester City draw a blank…

GK: Alisson (Liverpool, Brazil)
Alisson and Jordan Pickford have the highest save percentage (83.3%) of any goalkeeper left in the tournament apart from Andries Noppert (88.2%) but the Liverpool star has made a couple of particularly memorable stops, made all the more difficult by barely being involved in the four games Brazil have played so far.

RB: Diogo Dalot (Manchester United, Portugal)
Joao Cancelo could easily be in this side but Diogo Dalot replaced him for Portugal against Switzerland and the Manchester City star may struggle to regain his place. Dalot, and Raphael Guerreiro on the opposite flank, caused the Swiss all sorts of problems.

CB: Harry Maguire (Manchester United, Portugal)
Yes, he’s got a big head, but he’s got even bigger bottle. To be so roundly criticised by almost everyone and perform so well on the world stage is a great credit to him and Gareth Southgate.

He’s done the old-fashioned defending really well but has also had the minerals to dribble past the press and ping pin-point diagonals.

CB: Thiago Silva (Chelsea, Brazil)
People bang on about how great it would be for Lionel Messi to lift the World Cup, but it would also be quite the moment if this guy did it. His absence for Brazil against Germany in 2014 cost them seven goals and there appears to be no difference to his football now compared to then, with that same swagger and reading of the game clear for all to see. And what about that pass for Richarlison? Mercy me.

LB: Nayef Aguerd (West Ham, Morocco)
‘Ohhh, that’s the guy we spent £30m on in the summer,’ chorused the West Ham fans, who may have missed Aguerd’s one Premier League appearance before he flew off to Qatar. They will be mightily impressed by the 26-year-old, who along with Romain Saiss, was absurdly good in the last 16-clash against Spain. Not a left-back, but he’s played there six times in his career, so shut up.

CM: Casemiro (Manchester United, Brazil)
‘”Over the hill”, they said, “not as good as Declan Rice”, they said, “can’t pass it”, they said’, said the people who like to make up derogatory things people said about Casemiro before he arrived in the Premier League. He’s proven no critics wrong at this World Cup because he had no critics, or at least no critics worth listening to.

AM: Bruno Fernandes (Manchester United, Portugal)
It’s quite something to be the standout attacking player in a squad with quite so much attacking talent. Bernardo Silva, Joao Felix, Rafael Leao, Goncalo Ramos, are we missing anyone? No, we can confirm that we are not missing anyone. Bruno Fernandes has been the pick of the bunch and quite possibly the best player representing the Premier League in Qatar.

‘This is a weird one,’ he says, pulling Emiliano Martinez into a head lock and ruffling his hair. ‘Aston Villa! Imagine that.’ Then he looks as Alexis Mac Allister, squints and purses his lips, trying to remember. ‘Is it Fulham? No, it’s even weirder than that…’

Let’s face it, Mac Allister is unlikely to be at Brighton for much longer, particularly if he wins the World Cup. A World Cup winner cannot play for Brighton; it’s not allowed.

RW: Bukayo Saka (Arsenal, England)
Incredibly talented and wonderfully humble, he thanked a reporter for the compliment when he was compared to Kylian Mbappe and said “sorry to bother you” before asking David Beckham for a picture. If anyone deserves to win the World Cup for England it’s Saka, not because of his skill or the abuse he received after his Euro 2020 penalty miss, though both are good reasons, but simply because he’s just so goddamn lovable.

ST: Richarlison (Tottenham, Brazil)
He’s scored the two best goals of the tournament and clearly loving every second of it. Sort of a shame he moved to Tottenham when he did because he’s starring in the biggest of shop windows and could have been taken home by a big club…

LW: Christian Pulisic (Chelsea, USA)
The USA’s first bona fide soccer icon lived up to the hype before the last 16, by which point he was struggling with injury. Will undoubtedly go back to Chelsea and run into defenders as is his wont at club level. Hakim Ziyech, who could just as easily have taken this spot, will hit those same defenders with mishit crosses rather than running into them.