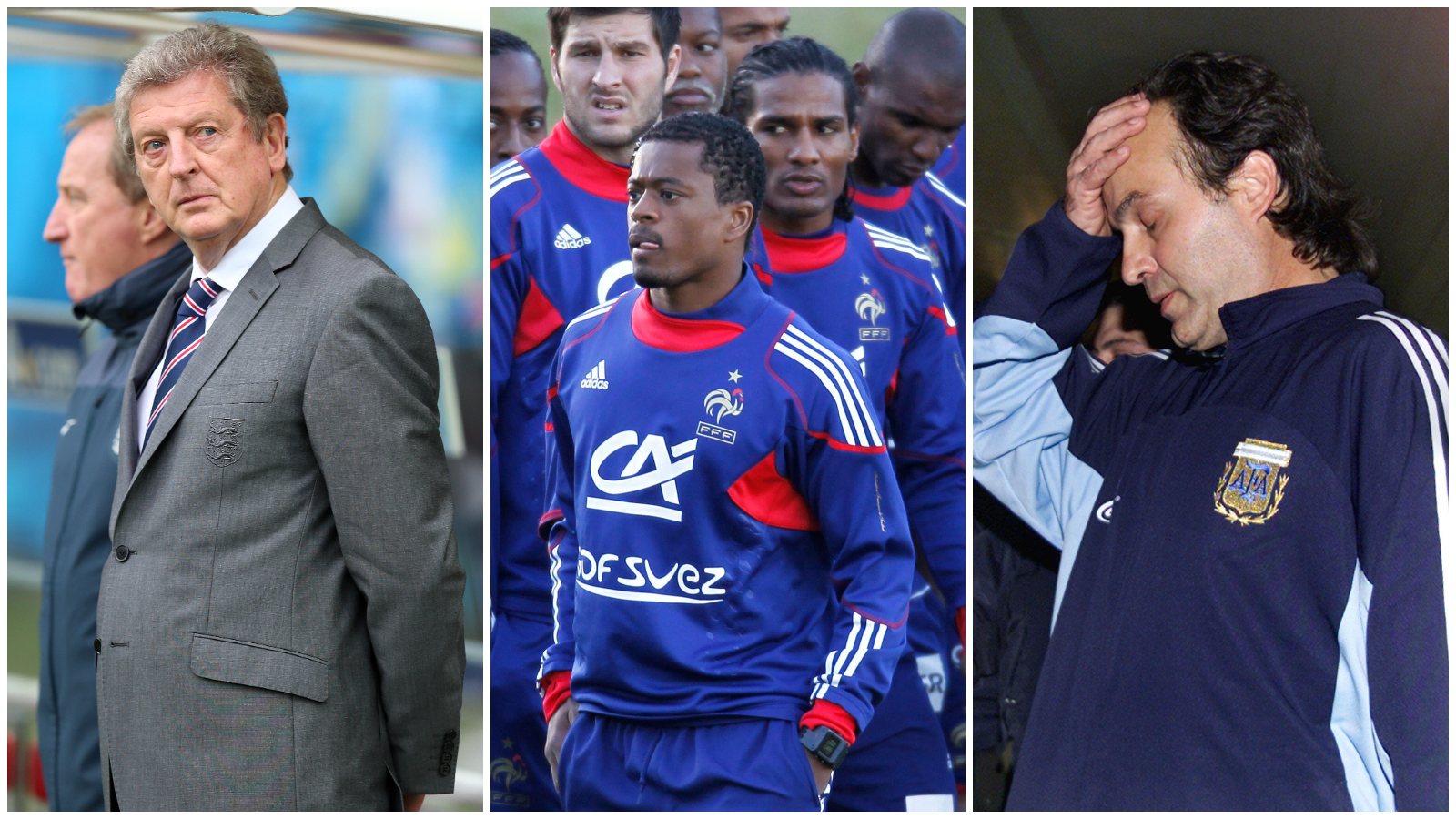 All the big hitters have flunked in the group stage at some point. France were hilarious in 2010; Argentina made Marcelo Bielsa cry; and Pele wanted to quit playing for Brazil.

Here are all the big nations and their worst World Cup finals performance since 1966.

England
Failed to qualify: 1974, 1978, 1994
Worst performance at a finals: The Three Lions went to Brazil in 2014 and, after three games, they were on their way home again. Roy Hodgson’s men were condemned to the earliest possible exit after losing their opening two games – 2-1 on each occasion – to Italy and Uruguay. Their dead rubber against Costa Rica was a dour 0-0 stalemate as England recorded their lowest ever total in the group stage of a finals.

Brazil
Failed to qualify: Never
Worst performance at a finals: After winning the Jules Rimet trophy in 1958 and 1962, Brazil arrived in England in 1966 as firm favourites to lift a third successive title and they got off to a decent start by beating Bulgaria 2-0. But then they suffered back-to-back 3-1 defeats, first to Hungry, then to Eusebio’s Portugal. “The 1966 World Cup was the toughest experience I have ever had in football,” said Pele. “I went away from that World Cup determined never to play for Brazil again.”

Germany
Failed to qualify: Never
Worst performance at a finals: Germany went to Russia as holders after winning the 2014 World Cup and they won all 10 qualifiers, but they were sent packing after finishing bottom of their group. It was the first time since 1938 that Die Mannschaft had not reached at least the quarter-finals. Joachim Low’s side lost their opening game against Mexico and needed a 95th-minute winner to beat Sweden next. Then they f***ed it by losing 2-0 to South Korea, the goals coming in the 94th and 95th minutes. It mattered little to South Korea who lost their opening two matches, with Sweden and Mexico progressing to the knockout phase.

Argentina
Failed to qualify: 1970
Worst performance at a finals: England took revenge on Argentina for their 1998 quarter-final exit by contributing to their group stage exit in Japan and South Korea. Marcelo Bielsa’s men got off to a decent start by beating Nigeria, with Gabriel Batistuta scoring the only goal. Then they met England and fell to a 1-0 defeat with David Beckham netting from the spot, leaving them needing to beat Sweden to qualify. They did not, with Hernan Crespo’s 88th-minute strike only good for a point. Sweden and England qualified, prompting Bielsa to weep and repeatedly nut the changing-room lockers, apparently.

Italy
Failed to qualify: 2018, 2022
Worst performance at a finals: Since they won their fourth title, Italy have been rather sh*t when it comes to the World Cup. They haven’t qualified for Qatar, they weren’t in Russia; and they might as well have not bothered going to Brazil or South Africa. In 2014, they beat England (nothing to brag about) before losing to Uruguay and Costa Rica. But they were even worse as defending champions, failing to win a game in 2010. Marcello Lippi’s men finished bottom of a group containing Paraguay, Slovakia and New Zealand.

France
Failed to qualify: 1970, 1974, 1990, 1994
Worst performance at a finals: Aside from the two occasions France have won the World Cup, Les Bleus have been underwhelming in finals tournaments. When they’ve managed to get there. Their records at the 2002 and 2010 finals are equally as miserable – one draw, two defeats – but their disgrace in South Africa was total and hilarious.

As the 2010 World Cup arrived, France were in disarray. The qualification campaign had been shambolic (with a shameful handball to see 🇫🇷 through vs Ireland) & Domenech was a dead man walking. Players had too much power and factions emerged, along with disrespect for the staff. pic.twitter.com/ihuEGejf1X

Spain
Failed to qualify: 1970, 1974
Worst performance at a finals: Spain also failed to get out of the group in 1978 and 1998 but it was a hell of a bigger shock when they failed to reach the knockout stage in Brazil, where they arrived in 2014 as holders. Vicente Del Bosque’s side was tw*tted 5-1 in their opener by Holland before going down 2-0 to Chile. By the time they beat Australia 3-0, the plane was already waiting to take them home.

Uruguay
Failed to qualify: 1978, 1982, 1994, 1998, 2006
Worst performance at a finals: Uruguay qualify for this list as a previous winner of the World Cup, though those titles were sodding ages ago, in 1930 and 1950. In the modern era, they’ve been hit and miss,  not just in qualifying for the finals but how they’ve fared on the occasions they have made it. Their worst showing was in Japan and South Korea, where they failed to make it out of the group stage after two draws and a defeat. There is every chance Diego Alonso’s side might fail to achieve even that miserable low in Qatar.

Netherlands
Failed to qualify: 1966, 1970, 1982, 1986, 2002, 2018
Worst performance at a finals: Netherlands qualify for the list because it’s our list and we make the rules around here. Sometimes. When we’re allowed. They’ve never won it, and they failed to reach the last tournament which was one of six DNQs since 1966 – even we’re starting to doubt their inclusion now – but generally you can count on the Dutch to find their feet at the finals, with two runners-up finished as well as a third and a fourth place. When they have qualified, they have never failed to make it out of the group stage, but the last 16 was as far as they got in 2006 and 1990.