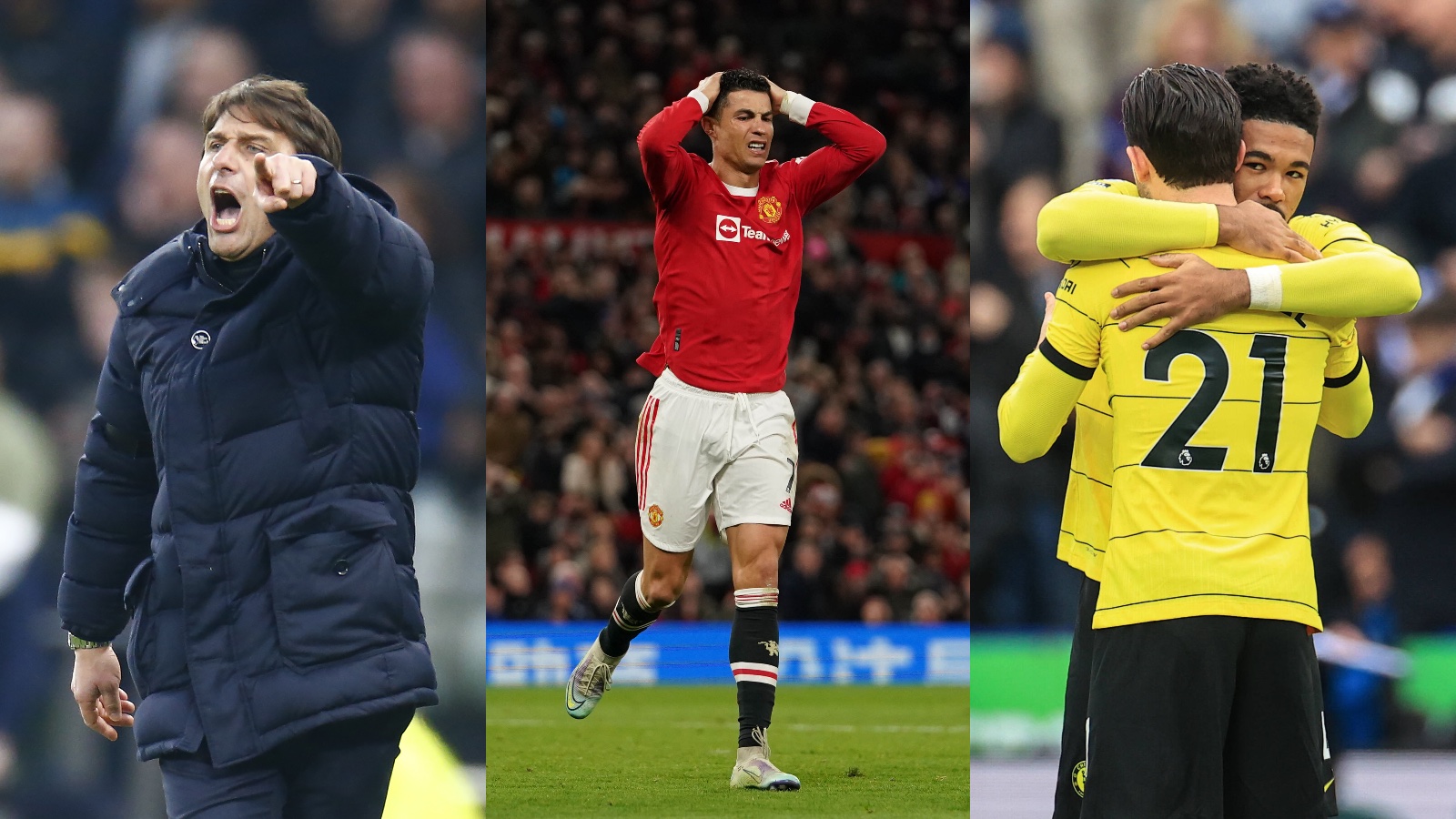 With whataboutery more rife now than ever, the Premier League ‘if onlys’ emerge now and again. It all could have been so different had such and such happened or not happened.

It’s likely only two of the Big Six will be happy with where they finish this season. Here are their caveats should they fail…

Arsenal – If only they hadn’t lost their opening three games
Since the defeats to Brentford, Chelsea and Manchester City left them bottom of the Premier League after three games, Arsenal have won an average of 2.16 points per game this season. They would now be above Chelsea in third had they picked up 2.16 PPG in their opening three fixtures, which is impossible, but shut up.

Mikel Arteta’s future was in serious doubt at that stage, with his ‘process’ showing no real signs of development deep into October with Arsenal still languishing in the bottom half of the table. He was the fraud desperately trying to assert his authority on an unruly squad.

Now he leads an Arsenal team brimming with confidence, vitality and discipline, in the driving seat to qualify for the Champions League next season.

But the start of the season whataboutery perhaps doesn’t deserve all that much contemplation when we consider who beat them. Sure, they may have given a better fist of it away to Brentford (they were certainly dominant in their 2-1 win in the reverse fixture), but their record against other members of the Big Six has been terrible all season.

Their 3-1 win over Tottenham way back in September earned the only points Arteta’s side have claimed against Big Six opponents in seven games. They probably would have lost to Chelsea and City even on current form and would still be fourth, simply facing a slightly less nerve-jangling race for qualification.

Chilwell hasn’t played since and James has made one Premier League appearance this year, scoring and assisting in the 4-0 win over Burnley at the start of March – to choruses of ‘that’s what they’ve been missing’ – before being struck down by injury once again.

How would Liverpool have done without Andrew Robertson and Trent Alexander-Arnold? Not nearly as well as they have, and Chelsea’s wing-backs have shown themselves to be just as important to Thomas Tuchel as the brilliant Liverpool full-back duo are to Jurgen Klopp.

Romelu Lukaku also probably wouldn’t have had quite such a terrible time. Having spent £100m on a striker, it would have been pretty useful to have the two guys best equipped to provide for said £100m striker available to play.

Liverpool – If only they had replaced Georginio Wijnaldum
Jurgen Klopp didn’t want Wijnaldum to leave and Liverpool didn’t sign a replacement, in the hope that Harvey Elliott, Naby Keita, Curtis Jones or Alex Oxlade-Chamberlain could fill in.

That’s not really happened. They’ve been rotated in that third midfield role alongside Fabinho and Jordan Henderson to the extent that none of the four is among Jurgen Klopp’s most-used XI players. Wijnaldum was in the top six most-used players under Klopp in all of the previous five seasons, and was third last term behind just Robertson and Mohamed Salah.

It’s pretty clear Klopp doesn’t trust or value the contributions of the remaining midfielders as much as Wijnaldum, with Klopp admitting back in October that the team was missing the Dutchman’s presence in the dressing room as much as they felt his absence on the pitch.

Manchester City – If only they had signed Harry Kane
Most of the time we sit in open-mouthed awe at the functioning of Manchester City’s attacking football. The front five, whoever they are, are a sight to behold as they interchange roles, draw defenders out of position and make runs into space that seems to appear from nowhere.

But there is the odd occasion, when they’re not quite ‘at it’, or – more weirdly – when they’re absolutely ‘at it’, when Kane’s name pops up. It’s either a statement when they’re not playing well: They really need a striker. Or a question when they are: How good would they be with a striker?

The answer to the question is: quite possibly not as good as they are without one. The riposte to the statement would be to point out the 30-odd times in the season in which the question and its answer have been more pertinent. Just as has been the case at Chelsea, a ‘proper striker’ may very well have been to the team’s detriment.

Manchester United – If only they hadn’t signed Cristiano Ronaldo
Manchester United were pretty good last season, remember? Ole Gunnar Solskjaer had them playing some attractive attacking football, they finished second, and with a few good summer signings they could challenge for the title. With the caveat that they had Solskjaer in charge, of course.

Jadon Sancho? Excellent. Raphael Varane? Yes, please. And holy f***ing sh*t they’ve got Cristiano Ronaldo from under Manchester City’s nose, this is the best thing to happen to anyone ever!

You were either in that camp, or in the one that thought buying a young striker with more to prove who wasn’t going to dominate the dressing room and make everything all about them was probably the better option.

United have been worse this season with Ronaldo than they were last season without him. Yes, we can point to other factors at play as reasons for their drop-off; Ronaldo isn’t solely to blame – he’s the top scorer after all.

Tottenham – If only they had hired Antonio Conte in the summer
Tottenham have won 1.89 PPG under Conte this season. Stretched over the full 29 games instead of the 19 he’s been around for, Spurs would be on 55 points, one above Arsenal instead of three points behind.

But that stuff is all a bit silly – there are far too many variables to suggest that would actually have been the case. We’re far better off making a comparison with Conte’s first campaign in charge of his only other Premier League club and assume Spurs would have followed the same path as Chelsea when Conte joined them at the start of the 2016/17 campaign.

Having won their opening three games of the campaign, like Chelsea, Spurs would meet Arsenal on matchday six, like Chelsea. Having conceded three goals in a thrashing by Arsenal at the Emirates, like Chelsea, Conte would have won the next 13 on the bounce after a tactical switch on the way to lifting the Premier League trophy.

N.B. We realise Nuno Espirito Santo was actually in charge for these results so this doesn’t really work or even make sense, but we enjoyed the coincidences, so hush your mouth.