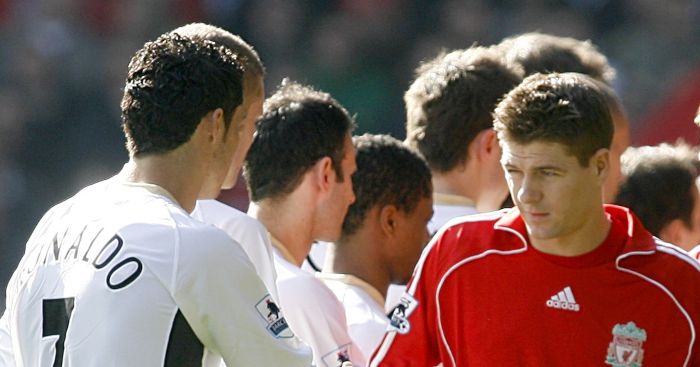 Manchester United’s current Premier League form leaves much to be desired but their European adventures thus far have provided some much needed cheer for supporters. A positive result against Istanbul Basaksehir would leave the Red Devils in a very favourable position at the top of Group H. It wouldn’t be the first time a team has suffered at home but succeeded abroad; here’s a side made up from players who won the Champions League/European Cup but faltered domestically in the same season. Steven Gerrard, for an obvious example.

England’s most-capped player of all time joined Nottingham Forest after the club’s promotion to the top flight in 1977 and helped them win the First Division in his maiden season at the City Ground. Brian Clough continued to create miracles the following season, as Forest went on to lift the European Cup in 1979 whilst competing for the title with a second-placed finish. As reigning European champions, Clough’s players were able to defend their crown and did an excellent job, defeating Kevin Keegan’s Hamburg in the 1980 final. However, Forest’s domestic form suffered and Shilton conceded far more than the previous year, with the club ending up in fifth. If you fancy a goalkeeper challenge, try naming both keepers to have featured for Aston Villa in the European Cup final of 1982, the same year the club finished 11th in the First Division.

Italian legend Paolo Maldini starts on the right side of defence to accommodate another multiple Champions League winner on the left – but more on that later. Maldini won Europe’s premier competition five times throughout his long and illustrious career, with the last of those victories coming in the 2007 final against Liverpool. The Rossoneri gained a measure of revenge on the English side after the dramatic events of 2005 – more on that later, too – but Maldini and his teammates ended up way off the pace in Serie A, finishing 36 points behind champions and local rivals Inter Milan.

Despite coming close in 2013 under Jurgen Klopp, Borussia Dortmund’s Champions League triumph in 1997 remains the club’s only win in the competition. Matthias Sammer captained them in their finest hour, leading a 3-1 win over reigning champions Juventus to see the club’s name etched onto the famous trophy. However, the Bundesliga didn’t make for such happy reading that season, with Dortmund finishing in third place behind Bayern Munich and Bayer Leverkusen.

Dortmund aren’t the only German side to have won big in Europe while stuttering at home; Bayern Munich’s dreadful domestic form took them down to 10th in 1975. An awful start to the season saw the club lose 6-0 to minnows Offenbacher Kickers and further damaging defeats followed before a change of management helped turn the tide. Franz Beckenbauer captained his side to 2-0 win over Leeds United in the European Cup final at the end of a turbulent campaign and he went on to lift the trophy for a third time in a row the following year.

A three-time Champions League winner with Real Madrid, Roberto Carlos won the competition in 1998, 2000 and 2002. Unfortunately for the Brazilian, none of those years saw Los Blancos add a La Liga title to their name. A fourth-placed finish in ’98 meant the club ended the campaign beneath Athletic Bilbao and Real Sociedad, as well as eternal rivals Barcelona. A 3-0 win over Valencia ensured an eighth European Cup win for Madrid in the all-Spanish final of 2000 but they finished behind their vanquished opponents in domestic competition, ending the season down in fifth.

These days Ronaldo is winning league titles with Juventus but struggling to help the Old Lady up to the top spot in the Champions League. The Portuguese hero had the opposite problem with Real Madrid in 2014 and 2018, with the Spanish giants achieving glory in Europe whilst faltering in the league. City rivals Atletico were dismantled by Ronaldo and chums in the 2014 showpiece but Diego Simeone’s side did win La Liga that year, with Real finishing third. Los Blancos were well off the pace in 2018, ending the season 17 points behind champions Barcelona but some Sergio Ramos inspired sh*thousery and Loris Karius ineptitude helped Madrid to a Champions League win over Liverpool.

The 2018 final may have ended in tears for Salah, Karius and Liverpool but the Champions League also holds much happier memories for the Merseysiders. 2005 may well be the best of the lot for fans of the club, with local lad Steven Gerrard inspiring the Reds to a remarkable comeback victory over Italian giants AC Milan in the final. Things didn’t go so well in the Premier League that year, though, Rafa Benitez’s side ending the season on the same points total as Bolton and finishing the campaign in fifth place, behind a David Moyes-led Everton side.

Twenty years before their most famous European night, Liverpool experienced their most infamous evening on the continent. The Heysel disaster overshadowed the 1985 final between Joe Fagan’s side and Michel Platini’s Juventus, with the French maestro converting a penalty to win the match. However, the Bianconeri didn’t perform so well in Serie A that season, ending up in sixth spot, with both Milan sides, Sampdoria, local rivals Torino and champions Verona finishing above them.

One of the greatest octogenarian footballers on the planet, Francisco Gento is synonymous with Real Madrid’s domination of the European Cup in the competition’s nascent years. The inaugural final saw Gento and his teammates come from two goals behind to defeat French champions Reims 4-3 but the 1955/56 La Liga season didn’t end so well for the European champions. Bilbao and Barcelona fought at the top of the table, with Madrid finishing a distant third. Gento and the iconic Alfredo Di Stefano scored in the following year’s European Cup Final, with Los Blancos defeating Fiorentina to retain the trophy, whilst their domestic form also improved as the side won the 1957 La Liga title.

Real Madrid may have conquered the continent in the 50s but the late 70s and early 80s saw English sides emerge as the supreme force in Europe. Liverpool, Nottingham Forest and Aston Villa added their names to the trophy. Liverpool saw off the challenge of Madrid in 1981, with Alan Kennedy’s late goal sealing a third victory in the competition for the Reds. Club legend Kenny Dalglish was the star man at the time, the Scot helping the team win numerous titles during his career. However, that proved to be the only year Dalglish finished below second in the league during his playing days at the club, with Bob Paisley’s side ending the campaign in fifth behind champions Aston Villa, Ipswich Town, Arsenal and West Brom.

Ever the man for the big occasion, Didier Drogba’s equalising goal and subsequent match-winning penalty against Bayern Munich in the shootout during the 2012 Champions League final made the year an unforgettable one for Chelsea fans. Dramatic victories over Napoli and Barcelona in the knockout stages were made even more remarkable by the club’s dismal domestic form, with the Blues ending the Premier League season in sixth place and 25 points behind both Manchester clubs. Even Alan Pardew’s Newcastle United finished ahead of them.