Home F365 Says Chile, the Soviet Union and a stain on FIFA’s reputation 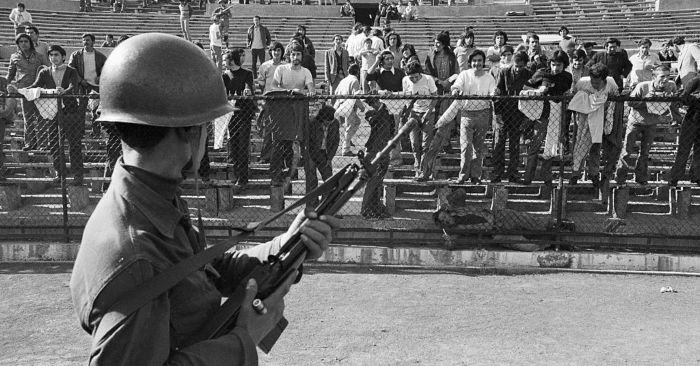 On first viewing, the footage is quite benign. Almost cheerful.

In a video shot in that rich 1970s colour, Chilean players are shown waving to the crowd as their national anthem plays. As the game kicks off, though, and the camera starts to retreat, clumps of supporters are shown among rows of empty seats.

The Chilean players jog forward into an empty half. They pass the ball gently between themselves before, eventually, one of them lashes a shot into an unguarded net. The referee awards the goal, runs back towards the halfway line and the game ends.

It’s the kind of anomaly which occurs in a friendly, but this was actually the second-leg of an intercontinental qualifying play-off for the 1974 World Cup. Two months before, in September of 1973, Chile had held the Soviet Union to a goalless draw in Moscow in front of 50,000 people. It was a source of national embarrassment for the Soviets, who had hoped for an easy win on home soil, but they refused to take part in the second leg and surrendered their place in West Germany in the process.

It wasn’t the opposition they objected to, but the venue. The return game was scheduled to take place in Estadio Nacional, Chile’s national stadium in Santiago, and for the previous two months it had been used as a prison for some 40,000 people.

Its subterranean corridors had darker and altogether more terrifying secrets, though. Augusto Pinochet’s men had been torturing and executing their political opponents, trying to eliminate anyone loyal to deposed and deceased president Salvador Allende or who might be a threat to the new military regime.

Whether Allende actually killed himself remains unclear. What is known is that with the army’s coup reaching its bloody climax and Pinochet’s forces inside the presidential palace, he spoke live to the nation on the radio for one last time.

“Workers of my country, I have faith in Chile and its destiny. Other men will overcome this dark and bitter moment when treason seeks to prevail. Keep in mind that, much sooner than later, the great avenues will again be opened through which will pass free men to construct a better society. Long live Chile! Long live the people! Long live the workers!”

And then, the end – either at the hands of his own AK47 or an assassin’s bullet. Eye-witness accounts varied, in both their veracity and credibility, and experts have been bickering ever since. Allende’s body was actually exhumed in 2011 and tests conducted seemed to indicate that he’d been murdered. He’d refused safe passage out of the country as Pinochet’s soldiers closed in and the bombs began to fall. Evidently, he was determined to depart with his presidency and, one way or another, he did. How, most likely nobody will ever know for sure.

Allende was a socialist and a radical. He had won the Chilean presidency in 1970 and enacted widespread nationalisation, raised the national wage and committed to heavy spending on housing and education, as well as a program of land reform. He made many powerful enemies, as anyone implementing such policies tends to.

One too many, in fact, and one which was extremely powerful.

In the decades since Allende’s death, the extent of the CIA’s involvement in his overthrow has been shown vividly. In 1970, the Americans were still committed to preventing the spread of communism and Richard Nixon was prepared to spend in the region of $10m in an effort to obstruct, destabilise and eventually nullify Allende’s government.

How involved the US actually was in his removal remains subject to conflicting reports, but declassified files have since revealed a sustained and concerted effort to influence a coup.

In 2004, Katherine Hite wrote an essay for the Harvard Review of Latin America. Its premise was to document the modern-day memorialisation within the stadium and capture the country’s difficulty in confronting such a harrowing past. But her description of the events of 1973 identifies it as only the most ghoulish emblem of a much broader and darker operation.

“Human rights groups have established that there were over eighty detention centers in Santiago alone. These clandestine jails used spaces ranging from schools and public buildings, like the Stadium, to private, secret homes and clubs.”

In The Ball Is Round, David Goldblatt’s remarkable history of football, the detail of events specifically within the ground is upsettingly vivid.

‘Men and women were herded into the underground maze of dressing-rooms and offices, left to starve, subjected to brutal tortures and interrogation and underwent mock firing squads; others were simply executed.’

‘Guitarists had their fingers broken and were then asked to perform. The military played the Beatles at full volume from their mobile megaphones to drown out the screams; friends and families gathered outside the newly erected rolls of barbed wire to hear the news of their loved ones.’

Truly, it is a depiction of hell.

As early as September, in response to accusations of humanitarian abuse and in a botched attempt at public relations, the junta had invited international camera crews and journalists inside the stadium. The pictures subsequently printed in the world’s media were menacing and can still be found on Google to this day. Clearly, the situation had a deeper and darker texture than Pinochet was trying to present and, on the evidence of press reports of the time, that was seemingly well understood.

The Soviet Union’s refusal to play the second game was covered in matter-of-fact terms by The New York Times, in an article filed from Geneva by special correspondent Victor Lusinchi on November 13, 1973.

‘Moscow balked at playing in a stadium that, it said, had been turned by the military junta into an “arena of torture and execution of patriots” who supported the late President Salvadore Allende. Prisoners were removed from the stadium only last week.’

Over the years, some ambiguity has arisen over the nature of the Soviet protest. The accepted version of events is that they were willing to play the game, but not at Estadio Nacional and preferably not in Chile. Their official statement to FIFA was extremely clear:

“The football federation of the USSR has asked the international football federation to hold the match in a third country seeing as how in the stadium, stained with the blood of the patriots of the people of Chile, Soviet sportsmen cannot at this time perform on moral grounds.”

More recently, though, it’s been suggested – controversially and, it should be said, by isolated quotes – that there were sporting and propaganda aspects at work, and that the Soviets feared defeat in Santiago. This article (by an unknown author) repeats claims by defender Evgeny Lovchev, in which he insists that had his side won the first leg of the tie in Leningrad, then the Soviet authorities would have permitted the team to travel to Chile.

Whatever the truth, FIFA’s response to the situation was shameful. On the instruction of Stanley Rous and his unrivalled ability to find the wrong side of history, a delegation was sent to Santiago to investigate the stadium and – while there’s no proof or suggestion that the organisation was complicit – they swallowed the Junta’s lies whole. Despite touring the ground with prisoners still inside, they could find no reason to move the game.

In fact, the statement they released is full of staggering naiveties and concluded that the prisoners were ‘not prisoners, but only detainees whose identity has to be established’. The delegation observed the ‘perfect condition’ of the grass and the ‘detainees in the dressing rooms and other rooms’. It also noticed ‘100 people waiting for news of relatives’ outside.

By 1973, the Second World War had been over for less than thirty years; nobody should have been in any hurry to accept illusory truths, or to play dumb to the existence of a concentration camp.

According to Goldblatt, Rous himself was contacted by the East German FA, who suggested holding the game – with an unintentional, albeit horrible irony – in Dachau. But FIFA would reject the proposal, choosing instead to quote their rule book at the Soviets and give the Chileans free passage to the 1974 World Cup.