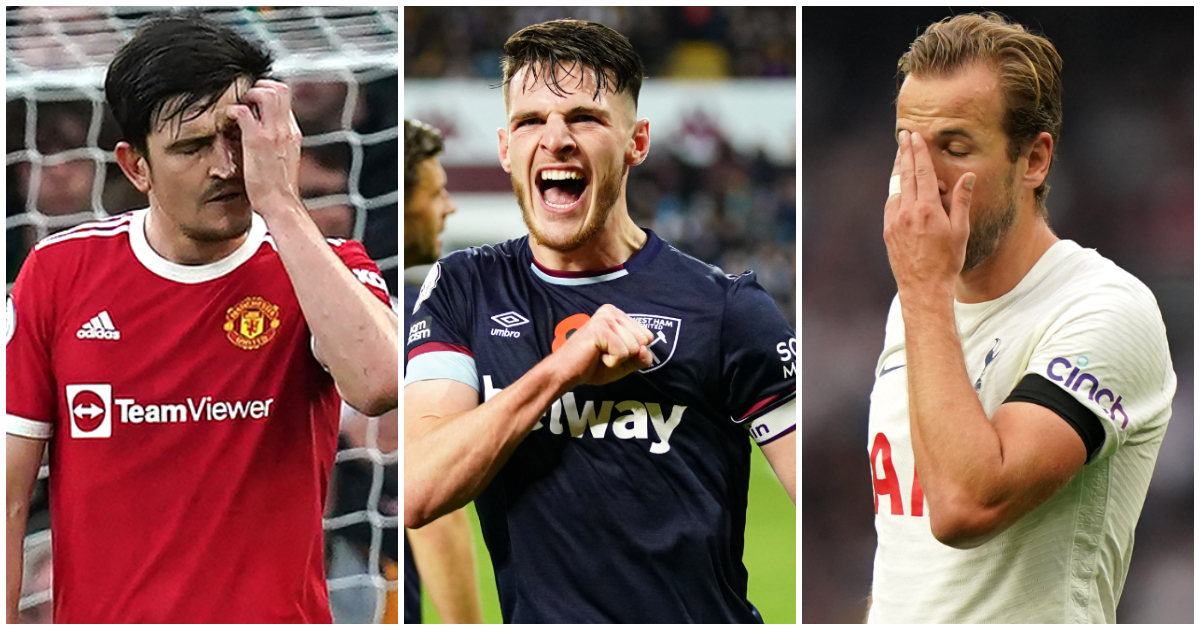 Harry Kane admits he has been struggling this season in the wake of the European Championships. He’s hardly the only England player to suffer after the summer. We’ve ranked the Three Lions hangovers…

27) Aaron Ramsdale
Ramsdale was late to the Euros party and he was only invited by default. Then he moved to Arsenal for around £30million, which you* silly people all laughed at. But no one’s laughing now Ramsdale is producing peak-Seaman performances in Mikel Arteta’s net.

26) Declan Rice
The West Ham midfielder won over many of his doubters at the Euros and his form through the early weeks of the season has turned most into firm believers. All of a sudden, £100million doesn’t seem as batsh*t mental as it did before the summer.

25) Reece James
“I’d say at this moment in time, this is probably the best I’ve performed.” No hangover then for the Chelsea right-back, though he only dabbled in the Euros with one appearance in the group stage draw with Scotland.

24) Sam Johnstone
The Baggies keeper was as fresh as a daisy after a summer of serving volleys in training at Jordan Pickford. Next summer will be a bigger one for Johnstone when he is scheduled to become a free-agent.

23) Jordan Pickford
Get the rave on? Nah, England’s No.1 has celebrated a stellar summer with performances for Everton that have highlighted his growing maturity. Which is handy given the new competition that has emerged for his place.

22) Phil Foden
Foden’s summer was underwhelming but the Manchester City star has made up for it since. The Stockport Iniesta has been superb for City in whichever role Pep Guardiola’s picks him in while for England, he was outstanding in the quarterback role against Andorra.

21) Ben White
White watched the Euros from the bench, something he probably wouldn’t have done from his sofa, and his summer was defined by a £50million move to Arsenal. He’s still feeling his way into the Gunners’ defence but whatever teething troubles he may have had aren’t down to his international exploits.

20) Jordan Henderson
Henderson? A hangover? Merseyside’s favourite Mackem would never. Jurgen Klopp gave him the opening day of the season off but the Liverpool midfielder has played every game since.

19) Jack Grealish
Grealish was the golden boy for England supporters and his ego was fluffed further by becoming the first British £100million player when City stumped up after the Euros. He enjoyed a stellar start at City but Grealish seems to have been on a minor comedown in recent weeks. He’ll shake it off.

18) Kyle Walker
The Manchester City defender cannot afford a hangover since there are around half a dozen right-backs breathing down his neck and Pep has started him in all but three of the champions’ Premier League and Champions League matches.

17) Dominic Calvert-Lewin
Started the season high on life, then he got injured and hasn’t played since August. Looks great in a skirt, though.

16) Conor Coady
Coady might not have played for England at the Euros but he probably returned to Wolves hoarse after a shouty summer and, according to Whoscored, he’s averaging the lowest rating at his club. Still, Southgate and Bruno Lage wouldn’t be without him.

15) Ben Chilwell
The Chelsea left-back probably needed a vice after the summer when he was England’s third-choice left-back in a squad of two left-backs. By September, Thomas Tuchel admitted Chilwell was suffering from ‘mental fatigue’ but he has since cleared his head and the hangover is gone. He was recalled by Southgate last month after missing the September internationals and has been a virtual ever-present for Chelsea after regaining his place from Marcos Alonso.

14) Jude Bellingham
The Borussia Dortmund midfielder recognised he wasn’t feeling as fresh as might so he asked for a little lie down during the last international break. It seemed to do the trick…

13) Bukayo Saka
If any England player was entitled to a hangover, it would have been the teenager who missed the decisive penalty in the final. But Saka has ticked along nicely on the flank for Arsenal, even if the feeling remains that there is plenty more to come.

12) Mason Mount
“Mason this season hasn’t been the same as Mason last season.” Are you going to argue with Gianfranco Zola? It could be a Euros hangover; it might be toothache.

11) Kieran Trippier
Trippier could have woken up naked on a Madrid roundabout in a pool of his own vomit with a stray dog squatting over his face and the hangover still wouldn’t come close to the one he endured after the 2018 World Cup. His form has dipped slightly – his average Whoscored rating for Atletico in La Liga and Champions League is 6.4, down from 7.02 last season – but not so much to put off Newcastle and Man Utd.

10) Kalvin Phillips
The Leeds midfielder was another to emerge as one of the standout stars of England’s summer and amid the standard transfer bullsh*t, Phillips has struggled to regain his form for Marcelo Bielsa through the early weeks of the season. Of course, he ‘s not the only Leeds player to struggle, but Phillips’ importance is highlighted by the fact Bielsa’s side lost seven of the nine matches he missed last season while this term they failed to win any of the three games in which he didn’t feature. That said, they’ve only won two of eight he has played.

9) Dean Henderson
The Manchester United keeper could probably do with a stiff drink. First he was injured at the Euros; then he got Covid; now he has to watch David De Gea channel Lev Yashin behind United’s dog-turd defence. The fog might clear in January, with Newcastle said to be offering a change of scene.

8) Tyrone Mings
Not even the best English centre-back at Villa this season. Dropped by Dean Smith in the ex-manager’s last home game as Villa boss. But Southgate has stuck with him. For now…

7) Marcus Rashford
You wouldn’t blame Rashford for going on the p*ss after a summer in which he was used more sparingly than he would have liked while missing one of the crucial penalties in the final. Maybe a session would have dulled the pain from his shoulder too, but instead Rashford went under the knife and is only now returning to action.

6) John Stones
Pep Guardiola knows how to keep his players grounded. After a splendid season for the champions prior to an impressive European Championships, Pep has sat Stones’ on the subs bench for most of the early campaign. He was picked for the derby last week, though, which he could have played after 16 pints and a bhuna the night before.

5) Raheem Sterling
Like Stones, Sterling has been on the end of some of tough love from Pep after a summer in which he was one of England’s golden boys. He has made only three starts and scored one goal while offering no assists in nine appearances altogether. A move to Barcelona might clear his head but the Catalans are around £36million short of City’s asking price.

4) Jadon Sancho
We’ve all had summers where we’ve done things we regret, and Sancho must be rueing his own personal choices. After moving to Manchester United, the England winger has barely played, which is just weird, even if there may be more to it than meets the eye.

3) Luke Shaw
Few have come down from the summer as hard as Shawberto Carlos. Since scoring his first England goal in the European Championships final, Shaw has been a mess for Manchester United. Played in the derby last week like he was concussed long before he actually was.

2) Harry Kane
We’ve all been ‘physically and mentally tired’ like Kane admits to have been, but the Spurs striker insists his raging spin-on is a consequence of the Euros and ‘my first summer of transfer speculation’. Which, apparently, isn’t a euphemism for a crate of Super Bock and three bottles of Aldi red. But the effect seems similar.

1) Harry Maguire
Hungover? The Manchester United centre-back still looks p*ssed. He and Shaw literally keep running into each other. Doesn’t help that Ole Gunnar Solskjaer picked him against Leicester when he was still feeling the effects of injury, just so he didn’t have to watch Eric Bailly tread on rakes for 90 minutes.