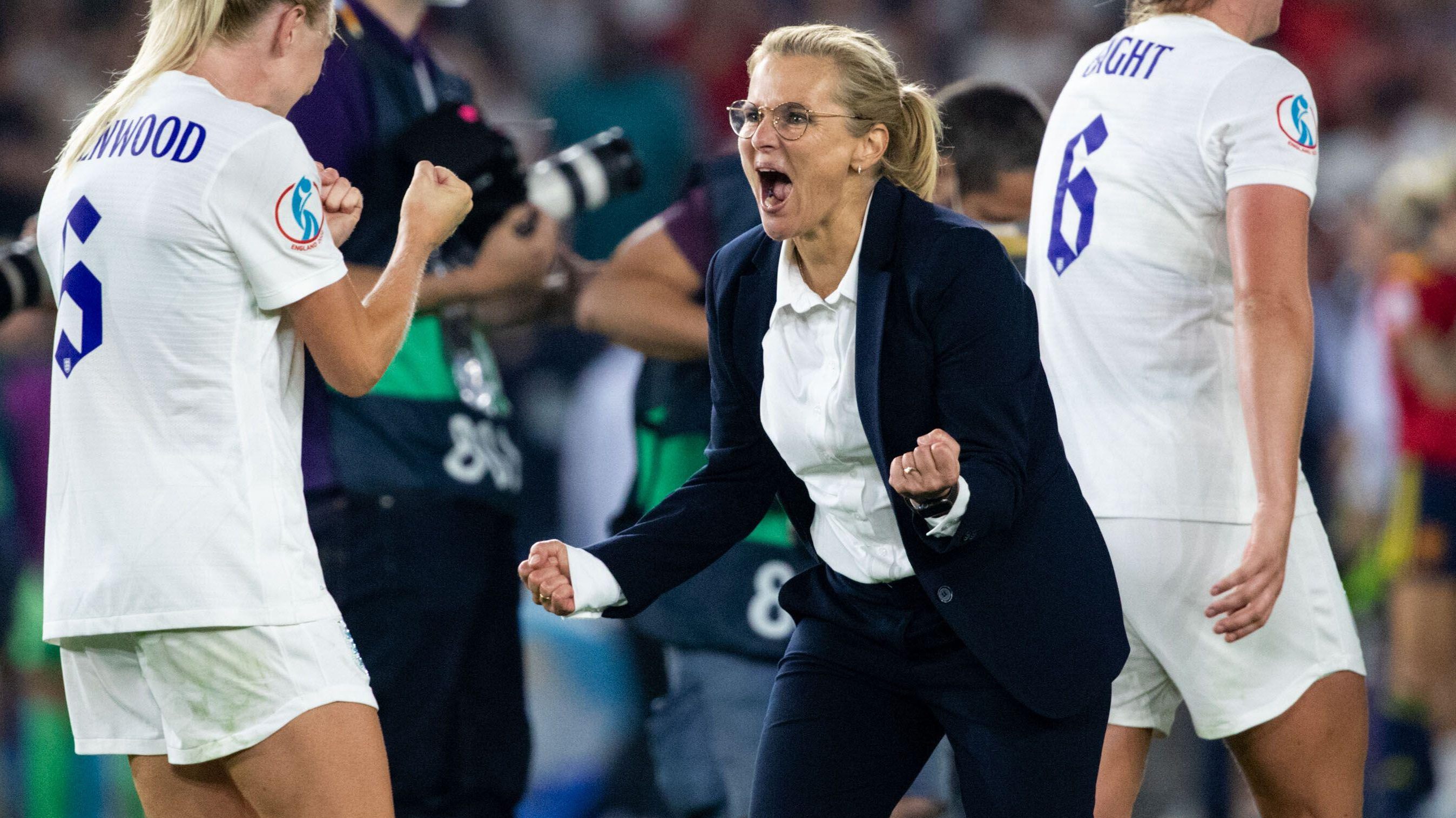 England could make history today. But whatever happens at Wembley, Sarina Wiegman has profoundly changed women’s football in this country. Johnny Nic examines ‘What’s So Great About…’ the Lionesses’ leader.

Who’s this then?
Sarina Petronella Wiegman is a 52-year-old Dutch woman who is the manager of England’s women. Born in The Hague, her playing career began at KFC 71, not a chicken outlet’s team but a Dutch club. She won the KNVB cup with them. She was invited to move to America to play for the newly-formed North Carolina Tar Heels alongside future superstar of the women’s game, Mia Hamm. She was initially a midfielder who played in defence later in her career. She won the NCAA Division at the first time of asking, playing 24 times and scoring four goals. She enjoyed the professional set-up at the club, in contrast to the situation in the Netherlands and it set an example of what to aim for when she returned home.

She signed for Ter Leede in 1994, a club based in Sassenheim, while also working as a PE teacher, winning two league titles and a cup, before retiring in 2003 in order to have her second child.

She was a Dutch international for pretty much her whole career, making her debut in 1987 aged just 17. In 2001 she was the first Dutch footballer to rack up 100 caps, eventually playing 104 times. However, five caps were against non-FIFA affiliated opponents, so her official total is 99.

After taking time out for child-rearing purposes. She returned in 2006 as manager of former club Ter Leede, winning a league and cup double the following season.

That achieved she moved on to ADO Den Haag, who would be competing in the newly-established Women’s Eredivisie. In 2011-12 she again did the league and cup double, adding another cup the following year. This success led to her appointment in 2014 as assistant national coach for the Dutch women and coordinator of the U-19s.

She did her coaching badges – being only the third woman to do so – and then a 12-month internship at Sparta Rotterdam and a KNVB course to obtain a coaching licence.

In 2015, the Dutch manager got the auld tin tack and Sarina stood in while they appointed some other much worse bloke, then went back to being assistant coach again.

More groundbreaking happened in 2016 when she was made temporary assistant of Ole Tobiasen at Jong Sparta Rotterdam in the Dutch third tier, whilst still doing her assistant work at international level. This made her the first female coach at a Dutch professional football organisation. Hurrah!

Better news was to come in early 2017, after the useless bloke who had replaced the previous useless bloke, was so useless he got sacked and once again she was put in charge on a temporary basis. But the authorities finally realised that they had the perfect person for the job there all along and in January 2017 she was made permanent head coach.

After all the rubbish men, Sarina organised the team, motivated them and improved team spirits. They were Euro 2017 hosts, won every game, beating Denmark 4-2 in the final, playing attractive football. She was awarded Best FIFA Women’s Coach of the Year and, along with her team, was awarded a gong in the shape of the Knight of the Order of Orange-Nassau.

In 2019, she managed to take her team to the World Cup final only to be beaten 2-0 by the all-conquering USWNT. Again they had burned up the tournament, playing sizzling football. As an acknowledgement of her contribution to the national football team’s success they put a likeness of her in the statue garden of the Dutch Football Association, KNVB, for her contributions to Dutch football, the first woman to receive such an honour. Let’s hope its better than, well, every other statue in the history of statues, all of which are awful, especially ones of CR7 which are simply laughable. Actually it’s not too bad.

In August 2020 the English FA announced they had snaffled her on a four-year contract  – and hopefully paid her some decent wedge – and she’d start work in September 2021, taking over from Silly Billy Philly who had used up all the inspirational quotes from his big book of inspirational quotes and thus had nothing left to offer.

Since then it has been a one-way road to success playing 19 games, winning 17, drawing two, scoring 104 goals and conceding a mere four. A win ratio of 89.47 per cent!

And here we are. Euro 2022 final awaits. Win or lose, England has one of the best coaches in the game. Someone who makes a palpable difference. Surely nothing can go wrong now.

Why the love?
Sarina Wiegman is someone who inspires great faith and loyalty in players. She makes them feel good about themselves, invests confidence in them and allows them to be themselves. When she took over the Dutch national side, they had been on a losing streak and morale was very low, but six months later they were European champions. That is a remarkable turnaround and speaks to her powers of woman management.

Her style is understated in attitude, right down to the Marks and Spencer jacket and trousers which will only set you back £67.50 if you want the Wiegman look. Sales are up 140 per cent, apparently.

Players are quick to praise how calm, clear and direct she is. Millie Bright says: “She takes all the emotion out and it’s never a comment to me directly as a person, more as a footballer and what’s best for the team.”

Beth England’s view: “She’s a very good people person. She tells us when things aren’t right; and she’s not shy to be savage and brutal when she needs to be.”

The first thing she did with England was get everyone together in an informal way to tell their stories, their backgrounds and to really get to know each other in a social setting. This helped create not just the obvious team spirit you see on the pitch but real bonds and friendships, so that when players talk about it being one big family with England, they really mean it.

Pitchside, she is calmness personified. Never gets flustered or annoyed. In the past we’ve seen England managers, specifically Sven, get chastised by the frontal lobotomy that is the English tabloid press, for not showing enough passion. Sarina shows how worthless and idiotic such attitudes really were, even 10 years ago. You want a manager who is always thinking, not screaming until their eyeballs burst out of their head. I mean, obviously, right?

However, at the end of the Spain game, leaping into the air, arms aloft, she unleashed a lot of pent-up emotion and it showed that the stillest of waters can run very deep indeed.

In the many interviews she’s done in the recent weeks, the thing that stands out is how relaxed and self-contained she is. She looks very happy in her own skin. And given all those years she worked as a PE teacher to support her football career, it isn’t hard to see her in that role, when interviewed in a training top, shorts, white socks and trainers. More than that, she just seems like a thoroughly nice, decent person with a healthy perspective on football and life.

So much of football is played out in the head and that’s where she does a lot of work. She is often reported as having a good sense of humour and there’s a lot of laughs in her sessions. However, this shouldn’t be mistaken for being soft. She easily makes tough, pragmatic choices, such as leaving out captain Steph Houghton from the England squad.

If you think about it, this is a woman who has managed the last three teams to make it to a European Championships and World Cup final, with two different teams. That isn’t a coincidence or dumb luck.

In that Spain game, it was her decision to bring on Ella Toone and Alessia Russo, then push Millie Bright forward in the latter stages that allowed Toone to score the equaliser that changed the game. Her deployment of subs has been exemplary. Partly this is because she is able to keep the non-starting players engaged and part of the team, and partly because she keeps it simple.

She trusts players to work things out on the pitch. This is a common trait amongst the non-control freak managers and it was said about Wiegman from her earliest management roles that she would set out parameters but within those you could do whatever you wanted.

Players know they are trusted to be clever enough to work out how to play the game within the game. Against Sweden, this was very much the case. It took about half an hour but the England team worked out how to stop being dominated and as soon as they had, they began to boss the game. For a manager to facilitate that sort of intelligence is no small feat.

When England beat Latvia 20-0 it might have seemed like a walk in the park against amateur opponents but she insisted that the team play with a ruthless edge. There was to be no easing off because they were inferior opponents and that spirit was carried through to these Euros in the 8-0 caning of Norway. There was no pulling back or easing off.  Same against Sweden, even when 4-0 up, there was no slowing down or playing out the game.

This combination of ruthlessness with calmness and warmth seems to be at the core of her success. It is very, very impressive.

Three great moments
A great doco into her career…

A rare outburst of emotion on the final whistle…

Future days?
We are just hours away from being Euro 2022 champions, but even if Germany beat us – and you have to say they do look very well organised and I can feel Top Of The Popps headlines being written already – the World Cup is just a year away, then the Olympics and then another Euros. And Sarina has made England in the top rankings to win one, some or all of those. That’s amazing. Having faith in a successful England team is not something that comes naturally to any of our fans. We’re built out of cynicism that it won’t last. Built to survive the beatings, the humiliations and the near-misses. Not built to win. Not built to be one of the best in the world. But that is what she has made us.

At 52, Sarina has many years of coaching ahead of her and hopefully she’ll stay with England for many years to come. There’s got to be a lot of wear left in that Marks and Spencer suit yet.