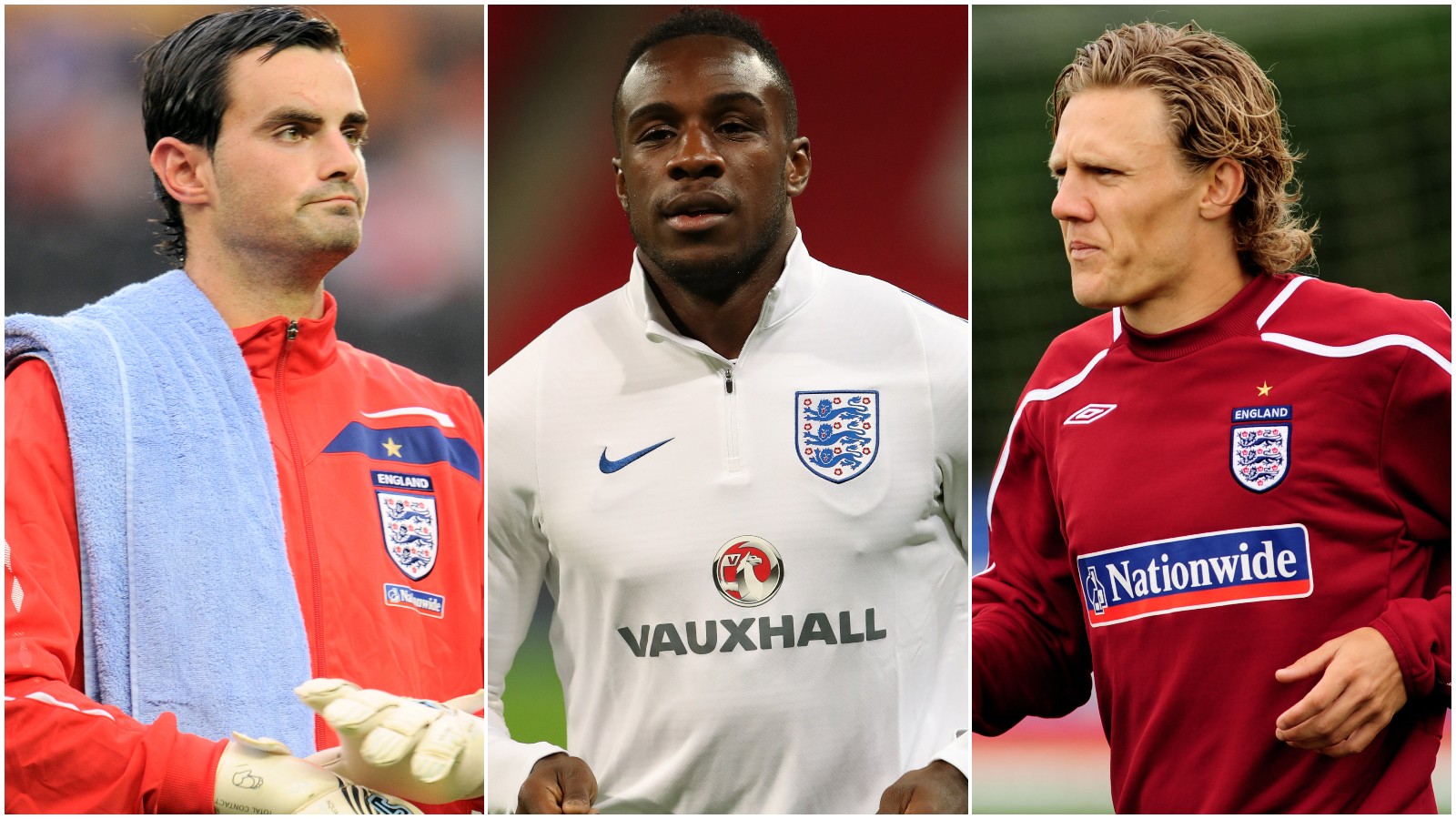 There are 36 players in the Premier League era who celebrated England call-ups but never won a cap. Including some random keepers.

There are many tales of one-cap-wonders, players who played once for England before disappearing into the international wilderness. These lads would kill for just one cap. And how close they came…

Shaka Hislop
The ex-Newcastle keeper represented the Under-21s and sat on the senior bench against Chile in 1998 in between stints as a Trinidad player. Faced England for the Soca Warriors at the 2006 World Cup.

Joe Lewis
The goalkeeper hadn’t played at a level higher than League Two when he sat on Fabio Capello’s bench for friendlies against USA and Trinidad and Tobago.

Scott Loach
Two senior call-ups for the then-Watford keeper in 2010 but rather than push on for a full cap, Loach’s career dropped through the divisions to the National League.

Frankie Fielding
Two of England’s three keepers for the friendly against Hungary in 2010 were Fielding and Loach, neither of whom made a Premier League appearance. Fielding was on loan at Derby from Blackburn when he sat on Capello’s bench.

David Stockdale
No England caps for the goalkeeper, pundit, businessman, philanthropist and doubtless a very tender lover. But the then-Fulham stopper was a regular feature in Capello’s squads in 2011.

Angus Gunn
The then-21-year-old, on loan at Norwich from Man City, had only 17 Championship appearances to his name when he was called up to the senior squad in 2017. In between that and being summoned for a training camp in 2018, Gunn turned down the offer to switch allegiance to Scotland.

Marcus Bettinelli
The then-Fulham keeper was in two England squads in the first half of the 2018/19 season. He has played only one Premier League game since the second of those call-ups and currently serves as Chelsea’s third choice.

John Beresford
The then-Newcastle full-back sat on the bench for a World Cup qualifier against Turkey in 1993 but had to make do with a couple of England B caps.

Richard Shaw
Called up as cover for the Umbro Cup tournament in 1995 but that was as far as the Palace defender and famous non-scorer made it.

Alan Wright
Called up twice by Terry Venables in the early months of 1996 but the Villa full-back never earned a cap.

Dominic Matteo
After Under-21 and B caps, the former Liverpool and Leeds defender earned two senior call-ups in 1996/97 but was never used. So he went to play for Scotland instead.

David May
The ex-Man Utd defender won the Treble but never a cap, despite sitting on the bench for a friendly against Mexico in 1997.

Jlloyd Samuel
The Villa left-back was included in Sven-Goran Eriksson’s squad for a 2004 friendly against Sweden but Samuel sat on the bench. After it became clear that was as far as he would go with England, the defender switched allegiances to Trinidad and Tobago.

Steven Taylor
Called up in 2007 for a friendly against Germany and again in 2013 for a World Cup qualifier against San Marino. But the Newcastle centre-back never played.

Curtis Davies
Called up by Capello twice in 2008 but the then-Villa defender never took to the field for the Three Lions.

David Wheater
The Boro centre-back was named on Capello’s bench twice but stayed there each time against France and Trinidad and Tobago in 2008.

Michael Mancienne
The Under-21 regular hadn’t made his Premier League debut when a call-up came from Capello for a friendly against Germany in 2008. But Mancienne never hit the heights for any of his clubs or country.

Ben Gibson
As a Boro boy, Gibson was called up by Gareth Southgate for a qualifier against Lithuania and again after his side’s relegation for games against Scotland and France. Then he went to Burnley and it all went terribly wrong.

Alfie Mawson
While impressing for Swansea, Mawson earned a call-up for friendlies against Netherlands and Italy but the defender failed to feature. Fulham presumably thought they were signing a future England international when they paid £20million for him a few months later. Which turned out to be quite the misjudgement.

Aaron Wan-Bissaka
Before Southgate sussed out the right-back, Wan-Bissaka was called up in August 2019 seemingly on the basis that Man Utd had just paid a bloody fortune for him. When the England boss actually watched him play for his new club, Wan-Bissaka rapidly slid down the pecking order.

Mark Draper
While at Leicester, the midfielder was called up for a get-together by Venables in 1995 and later made it on to one of Glenn Hoddle’s benches as a Villa player.

Darren Eadie
Called up for Tournoi de France in 1997 to cover for injuries but played a watching brief before injuries hampered his cause for a cap.

Lee Clark
Managed 11 caps for the Under-21s and sat on Hoddle’s bench at Le Tournoi, but never made a senior appearance.

David Thompson
The ex-Liverpool and Coventry midfielder earned a call-up from Sven soon after he joined Blackburn in 2002 but Thompson watched from the stands and never returned to the England fold.

Sean Davis
Sven changed his whole XI at half-time during the friendly defeat to Australia in 2003 in which Wayne Rooney made his debut but still Fulham midfielder Davis remained on the bench.

Nigel Reo-Coker
The ex-West Ham midfielder was among those on stand-by for the 2006 World Cup but had to remove himself from that list due to injury.

Jimmy Bullard
Two separate call-ups for the then-Fulham midfielder in 2008 – for qualifiers against Andorra and Croatia, and a friendly against Germany – but never a cap, nor seemingly a decent coaching session.

Karl Henry
As close to a cap as the Wolves midfielder got was inclusion in a 40-man provisional squad for a friendly against Denmark in 2011.

Jack Colback
A move from Sunderland to Newcastle was seemingly all it took for England to call on Colback for games against Norway and Switzerland in August 2014 but the midfielder had to withdraw through injury and was never seen near the England set-up again.

Paul Warhurst
The Sheffield Wednesday centre-back-turned-striker was called up by Graham Taylor for a qualifier against Turkey when averaging a goal a game over a dozen appearances in March 1993. But Warhurst had to withdraw through injury.

Chris Armstrong
Five years separated his B cap and a senior call-up, but the Tottenham striker remained a sub-not-used by Keegan against Poland in 1999.

Steve Froggatt
As a Coventry player, Froggatt earned two call-ups: one which had him sit on the bench for a Euro 2000 qualifying play-off against Scotland before being asked back for a friendly against Argentina. But days before joining up, the winger sustained a serious ankle after a shocker of a challenge from Nicky Summerbee. His career never fully recovered.

Matt Jansen
The Blackburn striker was set for a start against Paraguay in April 2002 but a stomach bug saw him pull out of Sven’s squad. The injuries sustained in a motorcycle accident the following summer saw Jansen’s career slide.

I am in no doubt that Matt Jansen would have achieved 50+ caps for England but for the horrendous injury/ accident. Exceptional ability and a privilege to see him play for us in his brief spell.🙌🙌 https://t.co/81CisyLsqk

Saido Berahino
The West Brom striker was called up by Hodgson in 2014 for games against Slovenia and Scotland but Berahino never took part in either match. He eventually switched allegiance to Burundi.

Charlie Austin
The QPR striker scored 18 goals in a relegated QPR team which earned a call-up for end-of-season games against Republic of Ireland and Slovenia but not a cap.

Michail Antonio
The West Ham striker, now forever lost to Jamaica, was an unused sub for Big Sam’s only match in charge in 2016 and had to withdraw from Southgate’s squad for games against Germany and Lithuania in 2017.

Demarai Gray
After eight goals in 26 Under-21 appearances, the then-Leicester winger was called up once by Southgate in 2018 for a meeting with Switzerland. All hope of a cap is not yet lost.