Home F365 Features Ranking every England player on their Euro 2020… 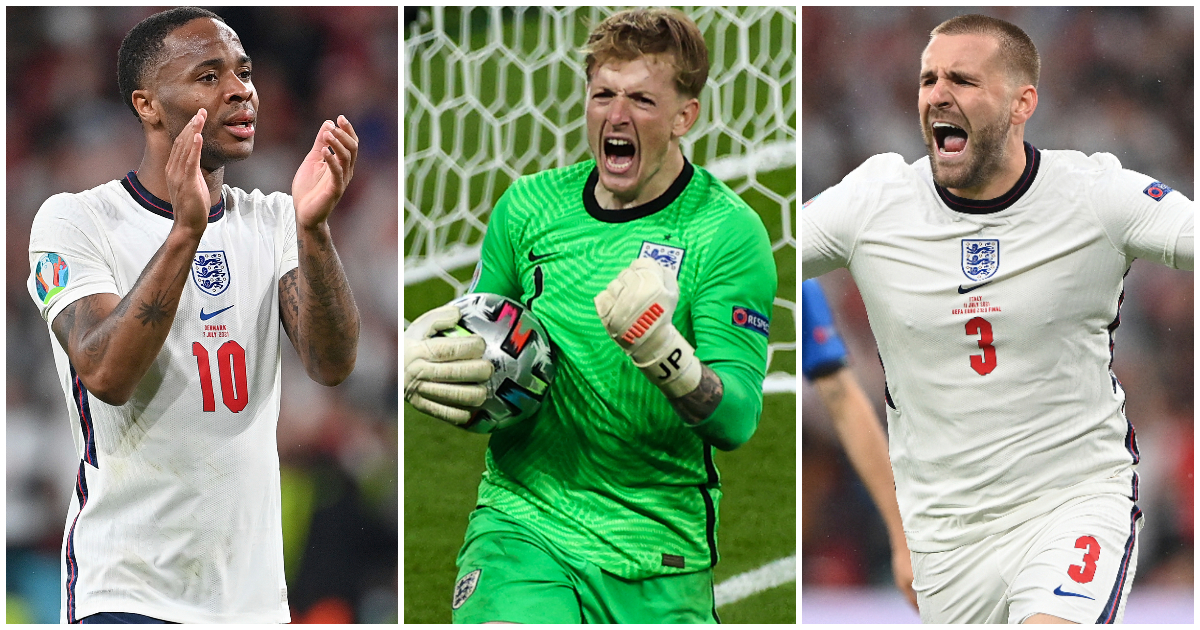 Raheem Sterling may well have been player of the tournament had England not suffered final heartbreak. But a couple of his team-mates rank higher here…

26) BEN CHILWELL: Forced to isolate after a chat with Billy Gilmour, but it is hard to say whether Southgate would have even noticed the Chelsea defender’s absence. Third-choice left-back in a squad with two specialist left-backs.

25) AARON RAMSDALE: A late call-up for the injured Dean Henderson and was always third-choice. Now Ramsdale can get on with sorting where he’ll play next season to help him move up the pecking order when all England’s keepers are fit.

24) BEN WHITE: The recipient of a late call-up to replace Trent Alexander-Arnold but White spent five of the seven matches in the stand as part of the trio to miss out on the match-day squad.

23) SAM JOHNSTONE: Probably would have missed out on the party altogether had Nick Pope been fit but after Henderson’s early exit, Johnstone was a Jordan Pickford knack away from keeping England’s goal.

22) CONOR COADY: Southgate appreciates Coady’s contribution, even if he didn’t offer the Wolves captain any game time. A valuable presence in the dressing room, apparently.

21) DOMINIC CALVERT-LEWIN: Even while Harry Kane was struggling, never was Calvert-Lewin considered to start over the Tottenham striker. Indeed, the Everton centre-forward was omitted from the 23-man squad against Germany and Denmark, with Southgate opting not to bother with specialist back-up for Kane, despite being able to name a dozen subs.

20) JADON SANCHO: Southgate’s use of Sancho suggests the Man Utd new boy would have struggled to make the squad had the numbers not been increased to 26. Sancho sat out all but six minutes of the first four games, and after failing to seize his opportunity to play in the quarter-final, the winger saw only a few seconds of the 240 minutes over the semi and final. And he was given those just so he could take a penalty, which he missed. Sancho has plenty of work to do to earn Southgate’s trust.

Johnny Nic: England at Euro 2020: What have we learned?

19) MARCUS RASHFORD: The Manchester United forward looked knackered towards the end of the Premier League season, which is hardly a surprise since he has been carrying a shoulder injury while playing a pivotal role for the Red Devils. And feeding hungry kids. So his involvement was limited to cameos in which he struggled to make a case for a start. After missing the target in the shoot-out, Rashford will surely now get the break his body has been craving.

18) PHIL FODEN: The Manchester City youngster was tipped to be one of the stars of the tournament but his Euros peaked in England’s opening game, during which he hit the post. Foden was left out of the XI from the third game onwards and though he made a positive impact after coming on in the semi, the attacker struggled to meet the sky-high expectations and missed the final through injury. Thankfully, many tournaments await.

17) JUDE BELLINGHAM: Bellingham was still 17 when he came off the bench in the group victories over Croatia and Czech Republic, in addition to which he was given the last 25 minutes while England were toying with Ukraine. The experience will help to set him up for further responsibility by the time the World Cup comes around.

16) REECE JAMES: His inclusion against Scotland was seen as an attacking move on Southgate’s part, but James struggled to make an impact during a subdued performance. Perhaps he was shackled by Southgate, in which case there are better options if the manager wanted a conservative full-back.

15) JORDAN HENDERSON: The Liverpool skipper hadn’t played since February prior to the warm-up friendlies but Southgate’s insistence on waiting for the midfielder was justified, even if he has a job on now to win back his place from Declan Rice or Kalvin Phillips. Rotten against Italy in the final, mind.

14) TYRONE MINGS: An able deputy for Maguire in the opening two matches. Against Scotland, Mings kept his 11th clean sheet in 13 England appearances, but never was there a question of the Villa defender keeping his place once the main man was available.

13) JACK GREALISH: Grealish was arguably the most popular player in Southgate’s squad, with his image always cheered on the big screen at Wembley, especially while England were toiling. But most of those moments were captured while the Villa talisman, like the fans who clamoured for him, maintained a watching brief, with Southgate offering him only one start while preferring pace to Grealish’s guile.

12) HARRY KANE: England’s no.9 endured a miserable group stage amid a national debate over what his problem might be. In Kane’s defence, he was feeding off scraps and, as it was hoped, the Spurs star eventually rediscovered his scoring touch to finish joint-second in the race for the Golden Boot. But when it mattered most, Kane failed to have a shot against Italy or even a touch in their penalty area. And now the saga truly begins over his future at club level.

11) MASON MOUNT: Similar to Chilwell, Mount was forced into isolation but unlike his Chelsea team-mate, the midfielder retains Southgate’s trust and this tournament is sure to have cemented his place in the manager’s first-choice XI. Southgate’s preferred profile of ‘high performance, low maintenance’ sums up Mount, who has had to turn his hand to different roles as part of England’s attack, which perhaps stunted his creativity.

10) KIERAN TRIPPIER: This tournament has cemented Trippier’s status as the most-trusted of the 427 right-backs in Southgate’s thinking. The manager preferred the Atletico Madrid defender on his opposite flank in the opener against Croatia and recalled him for the final, during which he laid on Shaw’s opener while cutting off the supply into Lorenzo Insigne.

9) DECLAN RICE: The West Ham midfielder capped an impressive tournament with an incredible performance in the final. England felt his absence when he was replaced with a quarter of an hour to go, we can only assume because he was physically spent.

8) JOHN STONES: Barely put a foot wrong, whether with Mings or Maguire. Stones’ renaissance for club and country this year has been remarkable to the point that he is now firmly the first-choice partner for Maguire and not just lucky to play alongside Ruben Dias at City.

7) BUKAYO SAKA: Though he might not feel it right now while he comes to terms with his penalty miss, Saka will in time reflect on a hugely positive tournament. The Arsenal flier sat out the first two matches but a man-of-the-match performance against Czech Republic earned him more prominence in Southgate’s thinking, with Saka starting against Germany and in the semi-final against Denmark. Balls of steel for the teenager to step up for the fifth penalty, regardless of the outcome.

6) KYLE WALKER: Jose Mourinho’s player of the tournament. “Absolute animal… I don’t remember him losing a single duel.” Well, there was that one time Walker was dribbled past but save for a couple of moments against Ukraine, the Manchester City defender was excellent, especially as one of a back three. Only three players made more recoveries through the tournament, with Walker’s pace bailing out his team-mates on numerous occasions.

1 – Despite playing 599 minutes (the equivalent to 6.7 full 90s), Kyle Walker committed only one foul and was dribbled past only once during #EURO2020. Insurance. pic.twitter.com/amnNX54DHf

5) HARRY MAGUIRE: Some questioned the wisdom of picking Maguire if he was crocked for the first two matches but his performances since showed exactly why Southgate was willing to wait. The Manchester United defender controls the back line, whichever form it takes, and in possession, his passing and dribbling through lines from the back added a dimension England were missing in the opening two games. At the other end, Maguire notched his first international goal at a crucial time against Ukraine, and that penalty in the shoot out…

Think it really went under the radar after last night's loss. But Harry Maguire literally broke the camera in the top corner with his penalty last night!!! pic.twitter.com/8YJ6eh3azz

4) KALVIN PHILLIPS: This time last year, Phillips was yet to play in the Premier League or represent his country. Now he’s a national treasure. Only Jorginho covered more ground in the tournament, with Phillips’ performances as part of a dynamic midfield partnership with Rice relegating Henderson to the role of stand-in. Phillips’ was “an amazing tournament” said Southgate, especially since a shoulder injury sustained in the final minutes of the Premier League season threw his participation into jeopardy. 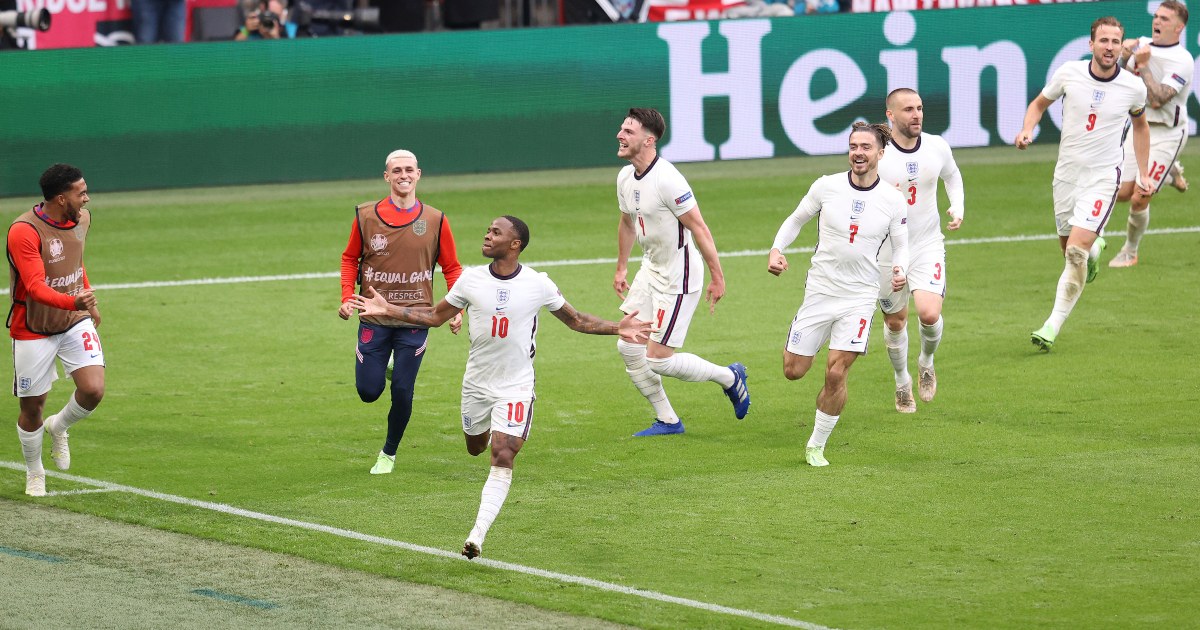 3) RAHEEM STERLING: At the start of the tournament, the debate raged over whether Sterling should start for England. Come its conclusion, Sterling was undroppable and would most likely have been crowned player of the tournament had his team triumphed. He scored three goals – winners against Croatia and Czech Republic as well as the opener against Germany – while also assisting Harry Kane’s opener against Ukraine and winning the penalty that finally saw off Denmark. Once a scapegoat, now a national icon.

2) JORDAN PICKFORD: Right up until England’s opening game, there remained a clamour to replace Pickford. Not any more. The Everton keeper’s performances surpassed all expectations on the way to keeping the most clean sheets in the tournament and breaking a 55-year record while going 725 minutes without conceding. He was unjustly criticised for failing to keep out Mikkel Damsgaard’s free-kick in the semi, but Pickford came up with huge saves against Scotland, Germany and in the final – the stop prior to Leonardo Bonucci’s leveller was miraculous. He certainly did his part in the shoot-out too, keeping out as many penalties as Gianluigi Donnarumma. England’s No.1 for the foreseeable.

2 – Jordan Pickford conceded two fewer goals (2) than the expected goals value of the shots on target he faced (4) at EURO 2020; only Czech goalkeeper Tomás Vaclik (2.6) had a higher goals prevented total in the tournament. Cat. #ENG #EURO2020 pic.twitter.com/E3oSw3pjnF

1) LUKE SHAW: Southgate raised many an eyebrow by picking Trippier over Shaw or Chilwell in the opening game, but since returning to the side, Shawberto Carlos has been one of the players of the tournament. Only one player laid on more assists and his first international goal, the quickest ever in a Euros final, really p*ssed on Jose’s chips. But his ex-manager still managed one last dig. Nevertheless, Shaw has made himself one of Southgate’s first picks, which is remarkable given he wasn’t even in the squad for any of the eight internationals between September and November at the start of last season.