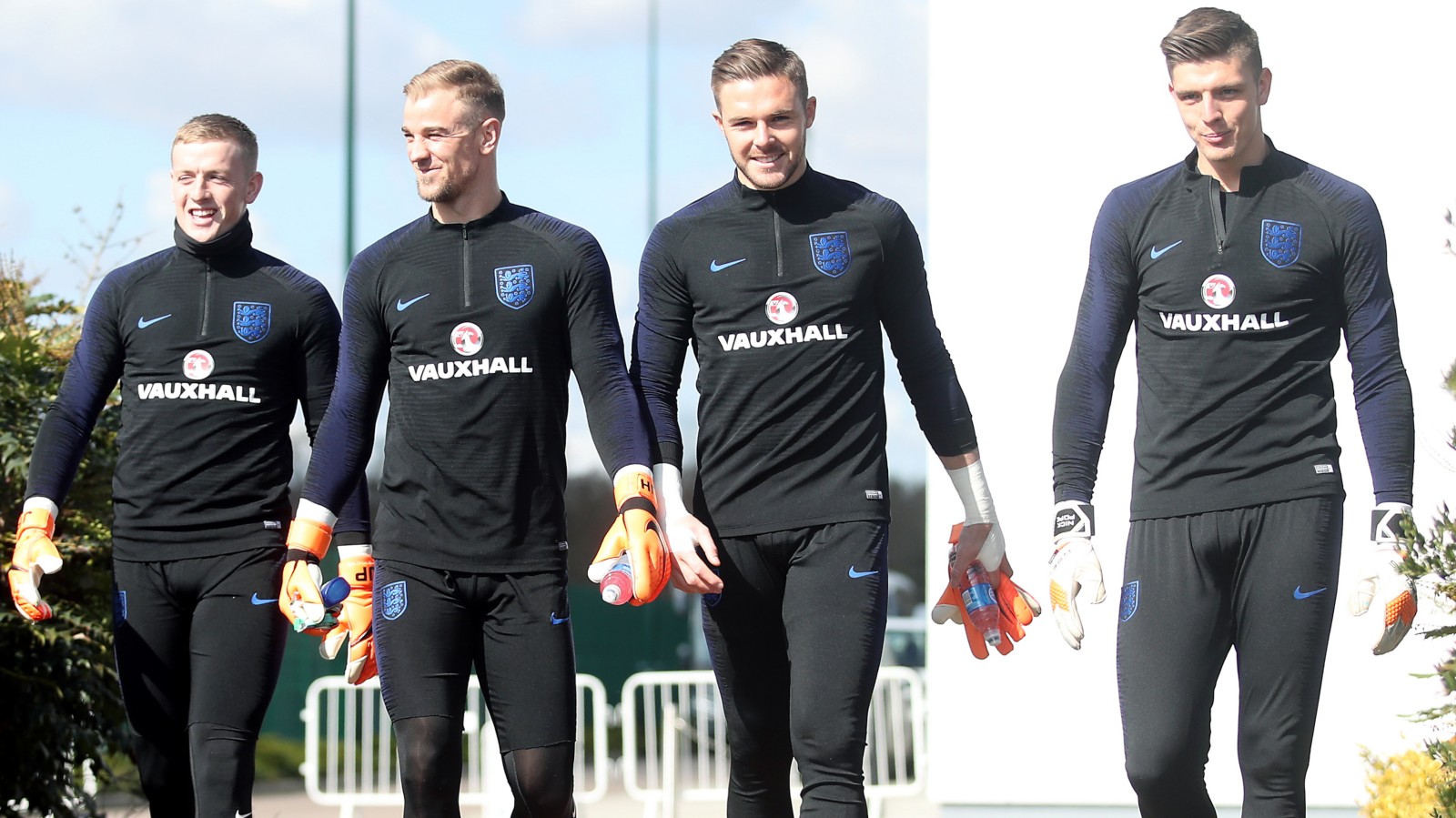 England have called up 24 keepers in almost 20 years but even those vying for the No.1 ranking here have plenty of critics. Including the current No.1 stopper.

24) Scott Loach – 0 caps
The friendly against Hungary in 2010 marked a nadir in England goalkeeping. While Joe Hart manned the sticks, his back-up was Watford keeper Loach and Frankie Fielding. Loach amassed 14 Under-21 caps but his career nosedived shortly after leaving Vicarage Road as his ‘dream move’ to Ipswich turned sour. The 33-year-old has been flitting around the National League for the last five years.

23) Joe Lewis – 0 caps
Lewis had 46 appearances in League Two, spread over spells at Stockport, Morecambe and Peterborough, when he got the call from Fabio Capello in May 2008. The 6ft 5in keeper sat on the bench for both friendlies against USA and Trinidad & Tobago but was never seen again on the senior scene. After it turned sour for Lewis at Posh, he went to sit on Cardiff’s bench before finally finding a home in the Aberdeen goal following spells at Blackpool and Fulham.

22) Frankie Fielding – 0 caps
Fielding, aged 22, was fourth-choice keeper at Blackburn behind Paul Robinson, Jason Brown and Mark Bunn when he was called up from the Under-21s by Capello in 2010 to be a substitute against Hungary. His first Under-21 start had come only the night before and Stuart Pearce admitted he had been “lightly raced, in terms of matches”. His last professional appearance prior to sitting on England’s bench at Wembley was on loan at Rochdale the previous season in front of fewer than 5,000. He made up the numbers in two subsequent senior squads and never played for Blackburn in the Premier League before moving to Derby then on to Bristol City. Then on to Millwall. Then Stoke. Who loaned him to Salford for a week last Thursday.

21) Marcus Bettinelli – 0 caps
The then-Fulham keeper was in two England squads in the first half of the 2018/19 season. He has played only one Premier League game since the second of those call-ups and currently serves as Chelsea’s third choice.

20) Angus Gunn – 0 caps
‘He might be good, he might be brilliant. Ask us again in five years,’ we wrote in the first iteration of this article in 2018. Four years on, we’re still not sure but the Norwich stand-in is certainly a lot closer to ‘good’ than ‘brilliant’. Still uncapped.

The 36 players who wish they were one-cap wonders

19) David Stockdale – 0 caps
The goalkeeper, pundit, businessman, philanthropist had eight Premier League appearances behind him as Fulham’s No.2 when Capello called upon him for a friendly against Denmark in February 2011. Stockdale had to turn down a squad place against Switzerland that summer because he wisely identified that getting married was a smarter long-term move, rather than watch a Euros qualifier against Switzerland from the bench or the stand. He made six subsequent squads while on loan at Ipswich, getting on the bench on four occasions.

18) Alex McCarthy – 1 cap
The Reading stopper was called up by Roy Hodgson in 2013 and Sam Allardyce in 2016 before finally being handed a cap by Gareth Southgate in 2018. McCarthy would presumably be back in this week’s squad if weren’t for injury, with his Saints stand-in Fraser Forster back in the fold instead.

17) Chris Kirkland – 1 cap
The then-Liverpool loanee netted his dad £10,000 when he made his England debut in 2006, but, despite being described by David Platt as the “best young goalkeeper in the world” and Sven-Goran Eriksson as the “future of English goalkeeping”, it was to be his one and only senior cap. Kirkland spoke out about his battle with depression that ultimately ended his career at Bury aged 35.

16) Scott Carson – 4 caps
The then-Liverpool keeper, another one, was first called up by Eriksson in 2005 but his international career is best remembered for a dreadful mistake after being picked over Paul Robinson when Steve McClaren’s England lost to Croatia in a must-win World Cup qualifier in 2007. Two sub appearances followed under Fabio Capello but the City third-choice was just one of a long line of keepers who never looked at home in the England goal.

15) Ian Walker – 4 caps
More than eight years separated Walker’s first and last caps, with only two coming between. His only competitive appearance came as a late replacement for Seaman when Gianfranco Zola’s volley beat Glenn Hoddle’s England in a World Cup ’98 qualifier. The then-Tottenham stopper watched European Championships in 1996 and 2004 with his involvement in the tournament in Portugal coming after a season in Leicester’s net that saw the Foxes suffer relegation. Lovely hair.

14) John Ruddy – 1 cap
Ruddy received his first call-up in Hodgson’s 23-man party for Euro 2012 but the then-Norwich keeper broke his finger in training prior to the tournament and was forced to pull out. To add insult to injury, it was Ruddy’s first broken bone, on his ring finger, just a few days before his wedding. He made a belated debut in a friendly against Italy shortly after the European Championships but remained a one-cap wonder, despite lurking around Hodgson’s squad for two more years.

13) Sam Johnstone – 3 caps
The West Brom keeper has yet to concede a goal for England though two of his three caps came against Andorra. A consistent presence in the squad for the last year but never likely to trouble those with genuine ambitions of taking or retaining the No.1 spot.

12) Fraser Forster – 6 caps
‘At 30, he looks finished at international level,’ we wrote four years ago. How wrong we were. Six years after his last cap, Forster is set to be on the bench against Ivory Coast after every other fit English keeper went down with illness or a knack of some kind.

11) Dean Henderson –  1 cap
Henderson had his eye on the starting spot for the Euros last year but everything that could go wrong pretty much did. He lost the battle for the gloves at Old Trafford, even if David De Gea auditioned no better, and though he made Southgate’s squad, he had to withdraw through injury. Then he caught Covid and little has been seen of him since while De Gea cruises to Man Utd’s Player of the Season award again.

10) Tom Heaton – 3 caps
The Man Utd back-up was around Hodgson’s England squad for 18 months before finally seeing some action in a pre-Euro 2016 warm-up against Australia. Heaton has played two halves under Southgate, conceding four goals against Spain and France, before injury ruined his World Cup hopes and allowed Pope to get comfy in his gloves.

9) Aaron Ramsdale –  1 cap
The Gunners’ gobby goalie is a No.1 in waiting according to many, particularly those with an Arsenal leaning. Few would argue that he hasn’t been the best English keeper in the Premier League this season but Ramsdale, capped once in a 10-0 win, still has a fight ahead of him to usurp Pickford, whom Southgate seems to trust. A genuine contender to challenge for the gloves.

8) Jack Butland – 9 caps
Back in 2018, it seemed to be a straight fight between Butland and Jordan Pickford for the No.1 spot at the World Cup. Pickford won a battle from which Butland seemed never to recover. He spent the following two years in the Championship while Pickford prospered before being offered a Premier League lifeline as Crystal Palace’s No.2.

7) Ben Foster – 8 caps
The Watford keeper has been in and out of the England squad so often since his first call-up 16 years ago that it was often hard to know his exact status. Foster retired from international football in 2011 to avoid being away from his young family after Capello treated him quite despicably over wanting to be present at the birth of one of his children – Foster’s not Fabio’s – though Hodgson convinced him to end his 22-month exile. The ex-Man Utd stopper made three further appearances, including one at the 2014 World Cup in Brazil, but he hasn’t been seen in the international squad since November 2014 despite his form often warranting a return.

6) Rob Green – 12 caps
Forever remembered for letting Clint Dempsey’s shot at the World Cup in 2010 slip through his hands and legs, an error which came on his last England start. Green’s brief spell came between James’ occupation of the Three Lions’ goal and Paul Robinson’s stint in the sticks with 10 starts in 63 squad appearances painting an accurate picture of a competent stand-in but never a first choice on the international scene.

5) Nick Pope – 7 caps
The Burnley keeper, when fit, has been a mainstay of Southgate’s squads since 2018. He became the first England keeper to keep clean sheets in his first six appearances before John Stones dropped a bollock to gift Poland a goal a year ago.

4) David James – 53 caps
James eventually replaced Seaman as England’s No.1 in 2002, five years after his senior debut, but he was replaced by Robinson after Euro 2004, following an error against Austria that saw The Sun depict him as an ass while hauling the poor, unsuspecting Mavis the Donkey to England training in a publicity stunt that led to the rest of the squad refusing to speak to the press in solidarity with their vilified team-mate. James regained his No.1 spot under Capello, lost it for the World Cup 2010 opener, got it back again, then lost it again when Hart was installed as No.1, with James pushing 40. Overall, James won 53 caps during a 13-year international career that seems almost impossible to judge as a success or otherwise.

3) Paul Robinson – 41 caps
The then-Leeds goalkeeper made his debut in the same game that Wayne Rooney was introduced to the senior England team – a 3-1 defeat to Australia in 2003 – but despite looking at one point as though he might enjoy a similarly prolonged international career, being first choice at Euro 2004 and the World Cup in 2006, Robinson suffered a slide that resulted in him being dropped by McClaren for the make-or-break Euro 2008 qualifier against Croatia – the same opponent who profited from Robinson’s famous air-kick from Gary Neville’s backpass. Despite a series of substitute appearances under Capello, Robinson – by now at Blackburn – failed to make the squad for the 2010 World Cup and retired from international duty shortly after.

2) Jordan Pickford – 42 caps
Pickford remains something of a daft puppy in gloves but he’s Gareth’s daft puppy. The Everton keeper has struggled for form at various points since establishing himself as Southgate’s No.1 four years ago but rarely has the England manager veered away from the ex-Sunderland stopper. Aaron Ramsdale will doubtless have something to say about it but Pickford, as it stands, looks set to remain Southgate’s pick for the World Cup in Qatar never having made an error that has led to a goal while playing for England. Of course, for Everton it’s a different story.

1) Joe Hart – 75 caps
England’s third-most capped keeper ever suffered a spectacular Pep-prompted fall from grace, so much so that his impressive body of work for England has largely been forgotten after he was bombed by Southgate in an awkward phone call prior to the 2018 World Cup. Southgate wasn’t wrong to say that Pickford, Butland and Pope had all had better seasons, mind, and that was the last Hart heard from the England manager and he remains on 75 caps. When he was at his best for England, we all assumed he’d still be in the sticks now with well over 100.