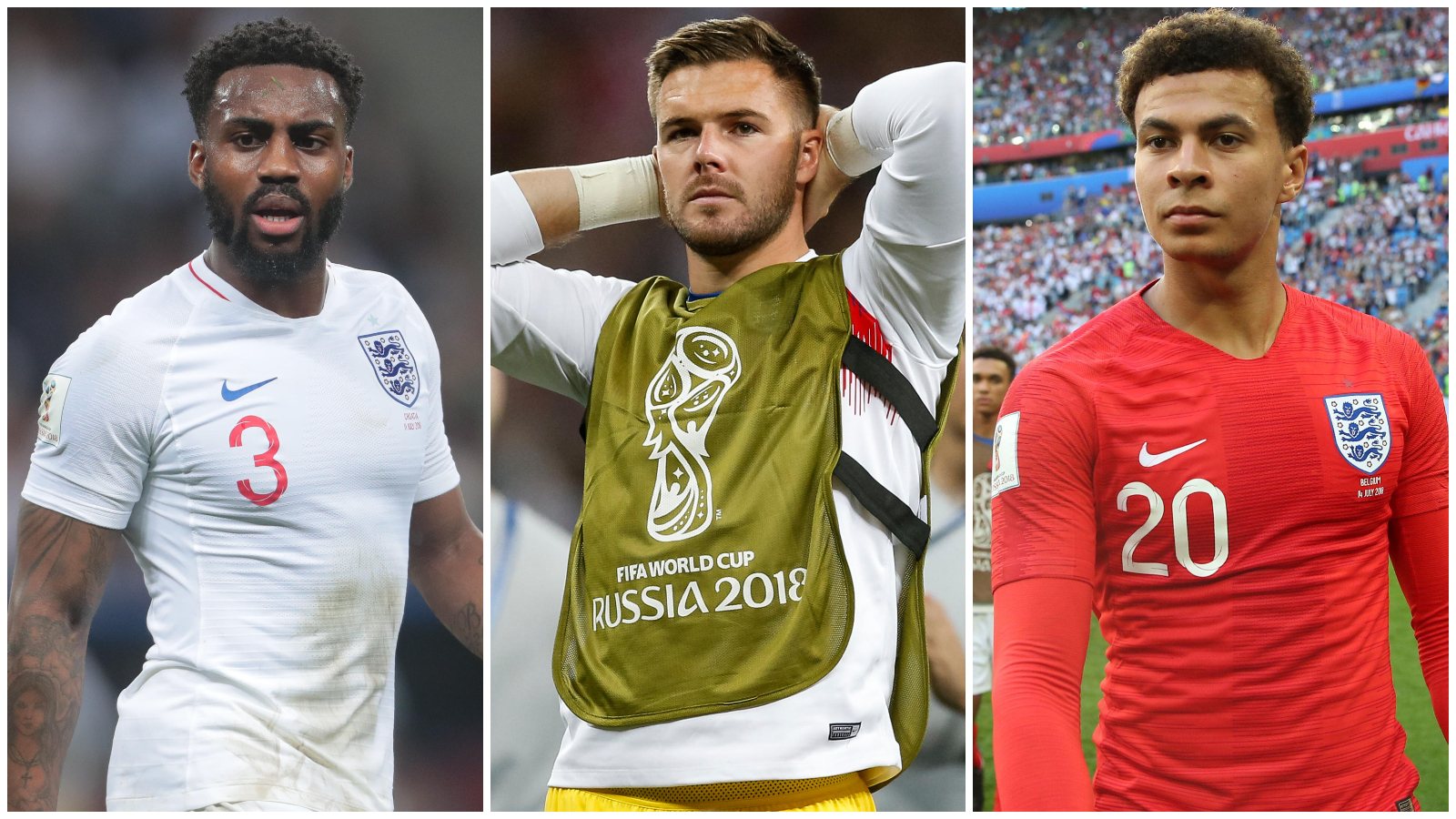 Only one of these England stars from the last World Cup in Russia is still playing regularly in the Premier League. And that’s a recent development.

Jack Butland
One of the biggest talking points in the lead-up to the World Cup in Russia was who would go to the tournament as Southgate’s No.1 – Butland or Jordan Pickford?

Pickford was given the gloves and he hasn’t relinquished them since. The Everton keeper has had a few wobbles but, five years later, he remains England’s first-choice and his re-establishing himself as one of the Premier League’s best stoppers.

Things went rather differently for Butland. He went to Russia after suffering relegation with Stoke as the only one of Southgate’s three stoppers with tournament experience having been a part of the Euro 2012 squad. No Premier League club spared him a couple of seasons in the Championship with Stoke, before he eventually earned a return to the top flight with Crystal Palace.

But Butland failed to shift Vicente Guita as Palace’s first choice. Injuries haven’t helped – a recurring theme throughout his career – but the former England stopper has played only 17 senior games since moving to Selhurst Park. Prior to suffering a broken hand in pre-season, he had been earmarked by Patrick Vieira for a loan away from Palace after Sam Johnstone arrived. Aged 29, England’s youngest keeper ought to be in his prime but he faces an uncertain future.

Dele Alli
Questions were already starting to be asked of Dele Alli when he went to Russia as one of Southgate’s first XI but no one foresaw the decline the then-Tottenham star would suffer over the seasons that followed.

Spurs certainly didn’t when they gave him a six-year contract a couple of months after the World Cup. Then it all started to go downhill.

Inconsistency gave way to a steady stream of p*ss-poor form before Mauricio Pochettino was fired by Spurs. Dele Alli enjoyed the briefest of bounces under Jose Mourinho but the rot had already set in. PSG looked a good option when it became abundantly clear that he needed a change of scene, but it was to Everton he went.

Even when it could cost them £40million, the Toffees seemed to have a good deal. If Alli performed, Everton would cough up; if he didn’t, they wouldn’t.

To Besiktas he escaped, in the hope he might rediscover his spark out of the glare of the Premier League. It hasn’t happened.

Danny Rose
Dele Alli lost the joy of playing football, but his ex-Spurs’ team-mate’s fondness for the game deteriorated to an even greater extent.

“I’ve had enough,” Rose said in April 2019, not a year after Russia. “At the minute, how I programme myself is that I just think: ‘I’ve got five or six more years left in football and I just can’t wait to see the back of it.’ Seeing how things are done in the game at the minute … It’s just – whatever, isn’t it? I just want to get out of it.”

Rose was referring specifically to the racism that followed him, especially on trips with England. But the left-back struggled to hide his lack of enthusiasm for the game while he counted down the years to retirement.

Mourinho’s appointment at Spurs only made things worse, but getting away – far away up to Newcastle – didn’t help. He left Tottenham at the end of his contract in 2021, moving up the road to Watford. That didn’t work either. He made eight appearances before being told he could leave, half a season into a two-year deal. Rose and Watford agreed to part in the summer and the 32-year-old looks set for retirement at least two years ahead of schedule.

Jesse Lingard
The then-Manchester United attacker saw his profile rise to own-fragrance levels during the World Cup in Russia. He was one of Southgate’s main men, scoring a wonderful goal against Panama while playing 120 minutes against Columbia and Croatia.

Upon his return – alongside the day job with United – he got to work on his fashion range, but his fortunes under Mourinho and then Ole Gunnar Solskjaer took a dramatic dip, which is not ideal when you have tat to push.

He was restricted to just nine Premier league starts in 2019/20 before being frozen out completely by Solskjaer for the first half of 20/21. He showed what he could do in a half-season loan spell at West Ham, creating some demand in the summer of 2021. But United got greedy and instead of accepting a reasonable price for a player of little use to them, they mothballed him, and continued to do so even after Ralf Rangnick replaced Solskjaer.

United couldn’t stop Lingard getting away this year when his contract expired around the same time he got very huffy about being denied a proper farewell. He waited for the offers to flood in. And waited. A few clubs were interested but none held Lingard in the esteem he held himself. Until Forest dumped a load of cash on his doorstep, and pretty much everyone else’s.

Lingard’s thinking: sign for a year at Forest, trouser their highest wage, then get a proper move, one more befitting of his status. But his form at the City Ground won’t create any more clamour next summer than there was this year.

The United defender was once, unhelpfully as it turned out, tipped by Sir Alex Ferguson to become one of the club’s greatest ever players. By 2018, it was clear Fergie had got this one wrong, but he was still a presence in Southgate’s England squad, playing both games against Belgium in Russia.

Indeed, Jones played in Solskjaer’s first nine Premier League games in charge in 2018/19, of which United won eight and drew one. A that stage, a new contract wasn’t the daft decision it has proven to be.

Since signing those terms, reportedly worth in the region of £100,000 a week, in February 2019, injuries and a general lack of reliability has restricted Jones to just seven Premier League starts.