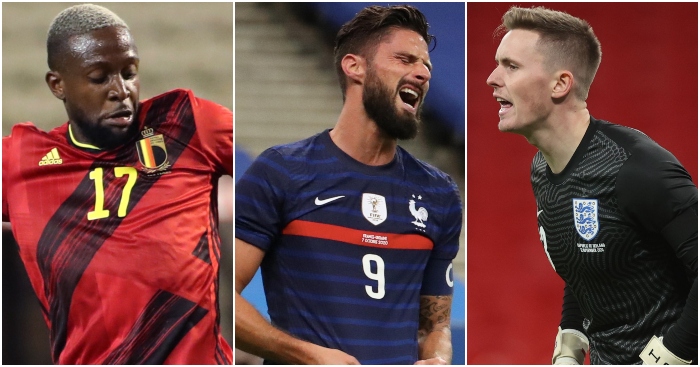 With Euro 2020 creeping up on the horizon, this lot have a problem. Can they solve it where they are, or do they all need a January move?

The word is that the Manchester United benchwarmer would be England’s No.1 already if he were playing more than the odd token cup game at club level. Since David De Gea seems to have rediscovered his mojo, Henderson will have to get away from Old Trafford if he hopes to get enough game time before the Euros.

You can’t blame Henderson for fancying his chances when he returned to United this summer after a stream of loan spells away. The 23-year-old is said to be an uber-confident character anyway but many pundits were tipping him to take the gloves off De Gea straight away when that never really appeared to be a realistic possibility. De Gea has built up enough credit over the last nine years to survive the wobbles he was clearly having.

Which leaves Henderson in a pickle, especially if he is in a hurry to swipe Jordan Pickford’s place. Whether United will allow him to go out on loan again isn’t the concern – they have Sergio Romero stewing and ready to reclaim his rightful role as De Gea’s stand-in. But where might Henderson go?

Save for a season-ending injury to a No.1 or a catastrophic loss of form between now and January, Premier League clubs look set in the goalkeeping department. There are some No.2s who could be upgraded but swapping benches is no use to Henderson.

Celtic were mentioned as a possible destination in Tuesday’s Gossip and Neil Lennon may well seize an opportunity to improve his goalkeeping options if £4.5million summer signing Vasilis Barkas, a goalkeeper who admits he ‘doesn’t like playing as a goalkeeper’, fails to use the time between now and the new year to bounce back from a ropey performance in the Old Firm derby.

“My situation at Tottenham is difficult at the moment.”

Winks acknowledged this week that he has a problem. Jose Mourinho has offered him just 17 minutes of Premier League action since the start of October. The midfielder was sent on against West Ham with Spurs 3-0 up a month ago and, well, we all know what happened next. Luckily Jose isn’t one to hold a grudge.

Winks hasn’t even made the bench for two of Spurs three Premier League matches since, but he hasn’t missed a minute in the Europa League, which tells you all you need to know about where the 24-year-old sits in Mourinho’s reckoning.

Fortunately, Gareth Southgate fancies Winks more than his club manager, but perhaps not strongly enough to condone a continuation of the midfielder’s inactivity should it continue. With Tanguy Ndombele, Moussa Sissoko and Pierre-Emile Hojbjerg all ahead of him in the battle for two spots, Winks is left hoping that some minor misfortune befalls one of his team-mates, or he is allowed to consider the possibility of a January move.

Winks set the target of getting in Southgate’s starting XI this week, but without a change in his circumstances, just staying in the squad seems a lofty ambition.

“Olivier knows it – the situation he’s in today cannot drag on forever. Before March he will have to find another solution than this one. He has had situations that have sometimes been complicated to deal with. Today it is not good for him.

“Will it stay the same or will it improve? He knows what I think, even if I don’t forget everything he has done and everything he would still be able to do.”

The situation is that Giroud has started only one game in all competitions for Chelsea – a home tie against Barnsley in the Carabao Cup. But the 34-year-old has been here before. Last winter, he was in a very similar situation having started only two Premier League matches prior to January before finding himself out of the squad altogether by the time the transfer window rolled around.

Giroud may well seek a move in the new year as Deschamps would doubtless prefer. But the France manager clearly trusts his centre-forward and having scored 42 goals in 103 caps to sit as Les Bleus’ second-highest goalscorer of all time – not bad for a striker who supposedly doesn’t score goals – it would be a wrench for Deschamps to drop Giroud.

Giroud isn’t the only Chelsea outcast with concerns over his place at Euro 2020. Rudiger is similarly fearful for his Germany position. Fortunately for the centre-back, Joachim Low seems rather more understanding.

“He tried everything to leave Chelsea because the European Championship is very important to him. I think he’ll try to leave again in the winter. He’s doing everything he can to stay in his best form.’

A ‘few weeks’ of inactivity may be permissible but Low will surely look rather less favourably upon Rudiger’s situation if he fails again to get away from Chelsea. The centre-back has been thrown a bone in the form of some Champions League minutes in recent weeks but he is yet to be seen in the Premier League and – now Frank Lampard appears to have straightened his defence out – there seems little prospect of that changing.

Low is hardly short of options at centre-back, and Rudiger’s performance in the 3-3 draw with Switzerland last month highlighted that, in fact, the 27-year-old might need match practice. But the Germany boss has kept faith for now and Rudiger repaid it with a much-improved showing against Czech Republic last week, and another 90 minutes in the win over Ukraine on Saturday.

We was about to let Tomori go on loan in favour of keeping this guy man… pic.twitter.com/wPnujo5TJH

Given the Liverpool striker’s lack of match action, perhaps it is a surprise that it has taken him this long to drop out of the Belgium squad. But he can’t say he wasn’t warned.

Origi was in Roberto Martinez’s party last month, seeing action in one of three games that he began on the substitutes bench. But Martinez indicated then his unhappiness with the player’s current circumstances…

“For someone like Divock Origi, it is important that he gets minutes. It is a concern that he is not playing for his club. But overall I am satisfied.”

An hour against Midtjylland since obviously wasn’t enough to keep the Belgium boss happy. Having not seen a minute of Premier League action so far this term, not even making the bench for three of Liverpool’s four league matches since the last break, Origi was dropped from Martinez’s squad for the current round of international fixtures.

Origi seems to be seventh man when it comes to forming Liverpool’s front three, with Diogo Jota, Takumi Minamino and Xherdan Shaqiri all ahead of the Belgian in Jurgen Klopp’s eyes. The 25-year-old almost certainly needs to leave in January – with Club Brugge mentioned as an option – if he is to convince Martinez to give him back his Belgium place.