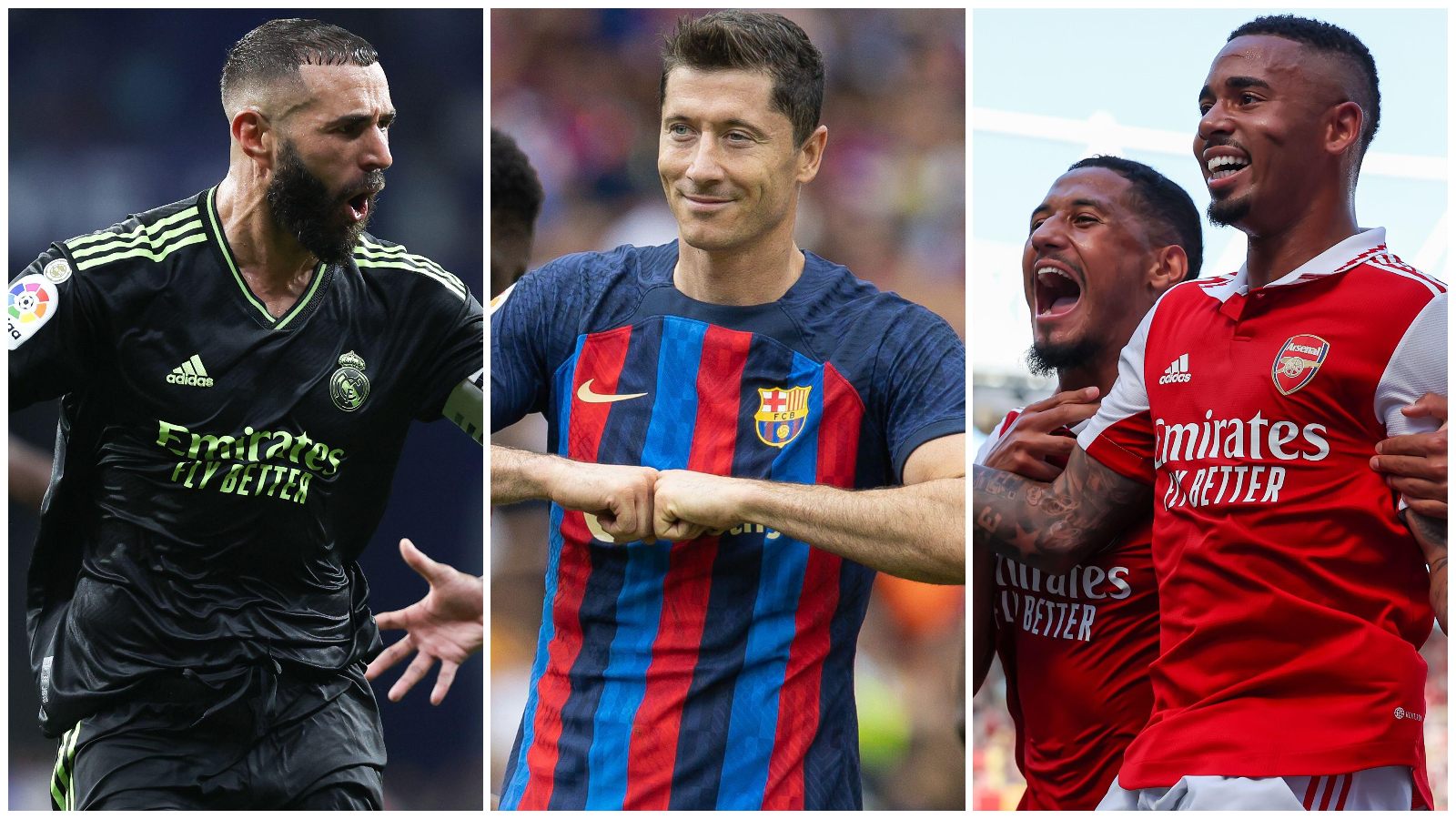 There is just one perfect side in Europe’s top leagues, with Arsenal behind only the Spanish giants and PSG. Two other Premier League sides make this top 10.

Here are the 10 most in-form sides in Europe’s big five leagues, ranked by points per game…

1) Real Madrid
Points: 18
PPG: 3
W6 D0 L0 F17 A6 GD:+11
The European champions have made the only perfect start in the five big leagues, with their latest victory coming in the Madrid derby last week. Carlo Ancelotti’s side have also won both of their Champions League games so far. They face Osasuna and Getafe as well as a double header with Shakhtar Donetsk before El Clasico on October 16.

2) Paris Saint-Germain
Points: 22
PPG: 2.75
W7 D1 L0 F26 A4 GD: +22
The only blemish on the big leagues’ top scorers’ record is a 1-1 draw with Monaco which came after Parisiens scored a ridiculous 17 goals in their first three games. And Lionel Messi is ‘starting to have fun again’, which is lovely news for the rest of Ligue 1.

3) Barcelona
Points: 16
PPG: 2.66
W5 D1 L0 F18 A1 GD: +17
After a lever-tastic summer, Barca have won their last five in La Liga following an opening weekend stalemate with Rayo Vallecano. Defeat to Bayern Munich was a blow but their performance was rather more encouraging than the last few humpings they’ve received from the Germans.

4) Arsenal
Points: 18
PPG: 2.57
W6 D0 L1 F17 A7 GD:+10
The fear was the wheels might come off Arsenal’s flying start after their 3-1 defeat to Manchester United at Old Trafford. But Mikel Arteta’s men recovered their composure to return to winning ways at Brentford, all the while fielding an actual child. That’s not right, is it?

5) Marseille
Points: 20
PPG: 2.5
W6 D2 L0 F16 A5 GD:+11
OM are off to a decent start as they look to again become the best of the rest in France. They remain unbeaten domestically, with draws against Brest and Rennes. In Europe, though, they’ve started their Champions League campaign with a pair of defeats to Tottenham and Eintracht Frankfurt.

6) Real Betis
Points: 15
PPG: 2.5
W5 D0 L1 F10 A4 GD:+6
Six goals in six games from Borja Iglesias has fired Betis to third in La Liga, with a 2-1 defeat to leaders Real the only blot on their copybook. Betis are also off to a winning start in the Europa League, taking six points from six, making it eight wins in nine games in all competitions.

7) Manchester City
Points: 17
PPG: 2.42
W5 D2 L0 F23 A6 GD:+17
With the World Cup looming and City set to be hit almost as hard as anyone else, Pep Guardiola took the approach of easing his squad into the season, with a relatively light pre-season programme. Perhaps being slightly undercooked has seen them draw with Newcastle and Villa but the feeling remains that they’ll p*ss the league. Especially with a Norwegian goalbot doing silly things up front.

8) Tottenham
Points: 17
PPG: 2.42
W5 D2 L0 F18 A7 GD:+11
Are Spurs good or sh*t? We don’t know either way for sure just yet, but the signs look very promising indeed. Drawing with West Ham was a disappointment but a point at Chelsea felt like three. One of Antonio Conte’s concerns was the form of Son Heung-min. Then he went and scored an 18-minute hat-trick.

9) Union Berlin
Points: 17
PPG: 2.42
W5 D2 L0 F15 A4 GD:+11
You might think that’s a funny way of spelling ‘Bayern Munich’ but, no, the Bundesliga’s representatives come in the shape of Urs Fischer’s Union, who’ve made an unbeaten start to sit two points clear at the top of the table, with Bayern back in fifth after drawing as many as they have won.

10) Napoli
Points: 17
PPG: 2.42
W5 D2 L0 F15 A5 GD:+10
Napoli squeeze into the 10 for the same reason they sit above Atalanta at the top of Serie A: a better goal-difference. Luciano Spalletti’s side have been slightly quicker out of the blocks in what could be a thrilling Serie A title race. Beating AC Milan at the San Siro last time out was a biggie.