Home F365 Features Five clubs, like Everton, who looked too good to go down 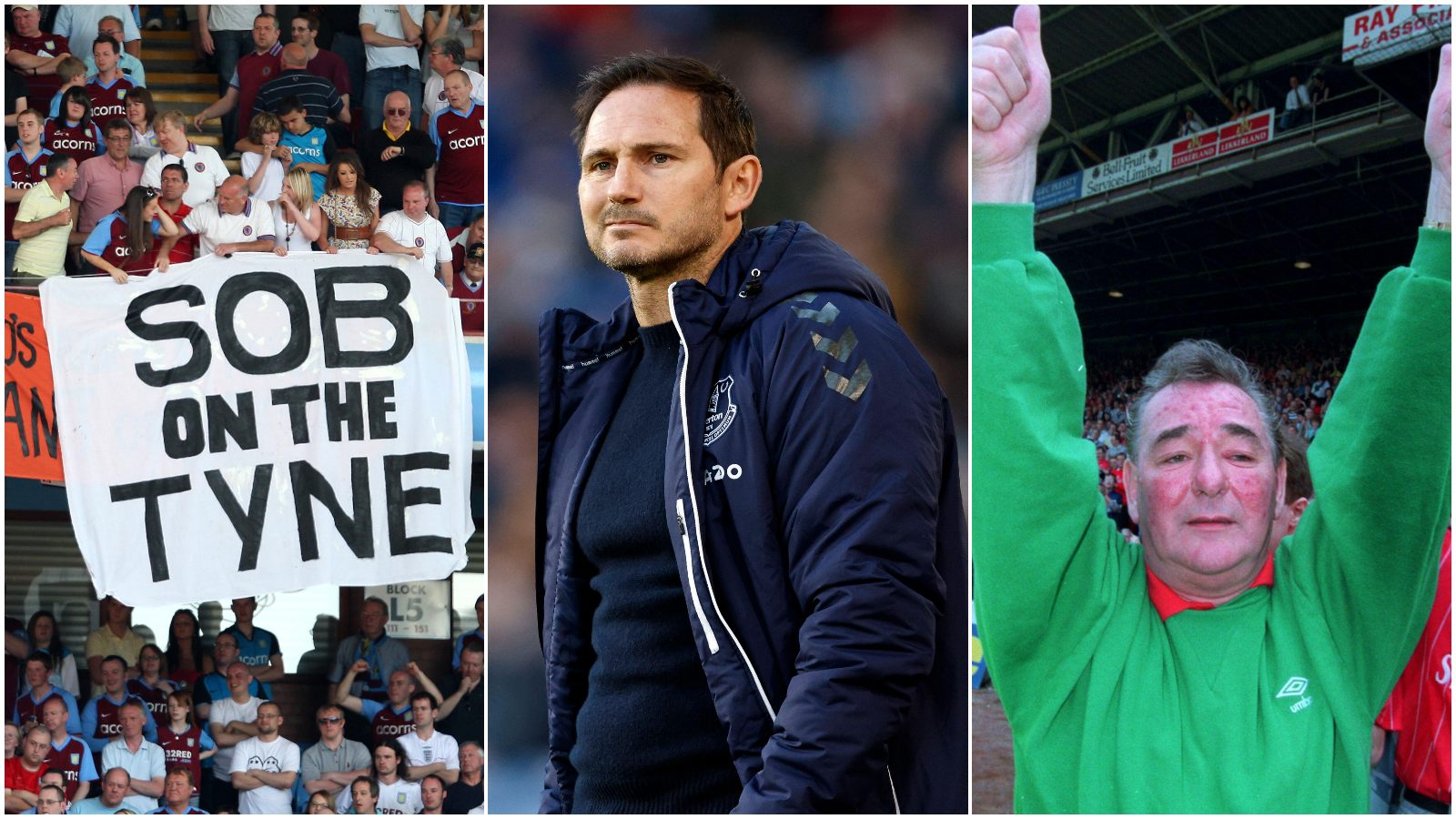 West Ham had the talent and they appeared to have points. Not so. Forest had Brian Clough; Leeds had recently been in the Champions League semi-finals.

With Everton facing the very real threat of relegation, we looked at the fortunes of five other clubs who were thought to be too good to go down. Leeds aside, it bodes well for a swift return if Frank Lampard becomes the first Everton boss in 71 years to be relegated…

Why did they go down? Brian Clough’s Forest finished eighth the season before and they began the campaign by beating Liverpool in the first ever Premier League match broadcast on Sky Sports. But the scorer of their winner that day, Teddy Sheringham, was sold along with Des Walker and Forest went into into free-fall.

They won two from 21 after the opening day and were rock-bottom by New Year. Forest rallied with five wins in seven but it was a fleeting revival. Clough had run out of answers and before their relegation was confirmed in the second-to-last game of the season at home to Sheffield United, the Forest legend’s retirement was announced, bringing down the curtain on an incredible managerial career at the City Ground in desperately ill-fitting circumstances.

How did they react? Once Clough had received the send-off he deserved, Forest appointed Frank Clark and set about returning to the top flight. They had to make do without Roy Keane, who was sold to Manchester United for a British transfer record fee. But Clark retained most of Forest’s Premier League squad while adding Stan Collymore, David Phillips and Colin Cooper.

Forest made relatively light work of their season in the second tier. They finished runners-up behind Crystal Palace but with a nine-point cushion between themselves and those made to endure the play-offs.

What happened then? Never a dull moment at Forest through the ’90s.

Forest initially thrived back in the Premier League. They finished third in 1994-95 with 77 points and qualified for Europe. Then dropped to ninth the following season, before plummeting back to the bottom of the pile in 1997. Then they won the Championship. Before finishing bottom of the Premier League for the third time in seven seasons. They haven’t been seen in the top flight since.

Portrait of an icon: Brian Clough

Why did they go down? Because they literally didn’t turn up for a game at Blackburn.

Boro were docked three points after they insisted they were unable to field a team at Ewood Park because of an injury and illness crisis. The FA weren’t having it and punished the Teessiders by stripping them of the points that ultimately would have saved them from the drop.

Boro shouldn’t have been down there anyway after a recruitment drive saw them sign Juninho, Emerson and Fabrizio Ravanelli. A bright start had them fourth but Bryan Robson’s Boro then went 12 without a win to tumble down the table.

They lost only two of their last 12 and reached both domestic cup finals. Which they lost. And they still went down.

How did they react? Brilliantly. Ravanelli was gone and Juninho too – he’d be back, though – but Steve Gibson wasn’t put off from buying some big names. Boro bought Paul Merson at the start of their season in the second tier, with Paul Gascoigne, Marco Branca, Hamilton Ricard and Alun Armstrong all following.

Mikkel Beck top-scored as Boro finished second, only three points behind First Division champions Forest and a single point ahead of Sunderland in third. Which precipitated the Black Cats’ famous play-off defeat to Charlton.

What happened then? Boro found some safety in mid-table in the Premier League, finishing anywhere between seventh and 14th in the next 10 seasons. They also won their first major domestic honour and enjoyed a couple of thrilling UEFA Cup runs, including one all the way to the final.

Why did they go down? Indeed, especially with that squad…

Glenn Roeder, after finishing seventh the previous season, was able to field Paolo Di Canio, Joe Cole, Michael Carrick, Jermain Defoe and David James but the Hammers’ star quality counted for little during a dreadful first half of the campaign.

Three wins in 24 games left West Ham bottom of the table. They roused themselves to win seven of their last 14, but it wasn’t enough to save their skin. With Trevor Brooking now in charge after Roeder had to step down due to ill health, the Hammers were relegated on the final day despite amassing 42 points.

How did they react? By having a clear out.

Through the summer and during the following season, the Hammers raked in around £40million for Cole, Defoe, James, Trevor Sinclair, Glen Johnson and Frederic Kanoute. Di Canio and Les Ferdinand also departed but Carrick stayed to play alongside new recruits like Matthew Etherington, Rob Lee, David Connolly and Nigel Reo-Coker.

Roeder returned to the dug-out but he was replaced once again by Brooking upon being sacked three games into the season. Alan Pardew eventually took over and dragged the Irons to a fourth-place finish. But in Cardiff, they lost to Palace in the play-off final.

They spent another year in the second tier, this time finishing sixth but Pardew’s side returned to Cardiff to beat Preston and secure a place back in the top flight at the second attempt.

What happened next? Three top-half finishes in four seasons, but the Hammers failed to heed their warning after flirting with another relegation in 2010. Instead they appointed Avram Grant and went down in disgrace the following year.

Why did they go down? As a consequence of ‘living the dream’.

That was how Peter Ridsdale described Leeds’ approach to life in the early 2000s, when they went toe-to-toe with the biggest clubs in Europe, reaching the Champions League semi-finals in 2001. After splurging on players, the Whites finished third, fourth and fifth in the Premier League, but that last failure to secure a Champions League return left the club in a financial black hole.

From fifth in 2002, they dropped to 15th the following season. A year later, £100million in debt and with most of their assets already stripped, Leeds finished 19th and were banished to the Championship after 14 years in the Premier League.

How did they react? They sold what few decent players were left – Alan Smith, Aaron Lennon and Paul Robinson were their last remaining assets – before selling the training ground and their stadium.

Kevin Blackwell was given the unenviable job of avoiding a second successive relegation, which he achieved after a start as poor as was anticipated. They finished 14th while being taken over by Ken Bates.

What happened next? A brief revival to reach the play-off final, which they lost 3-0. Then they finished bottom of the Championship before spending three seasons flailing around in League One, eventually getting out of the third tier in 2010. It would be eight long seasons before Marcelo Bielsa arrived to part the clouds.

Why did they go down? ‘Mike Ashley’ is the short answer.

His first season as Newcastle owner had replica shirt-clad Ashley downing pints in the stands with the fans. The appointment of Kevin Keegan to replace Sam Allardyce enhanced his popularity even further. But Keegan’s stay ended early in the 2008/09 season amid clashes with director of football Dennis Wise. King Kev’s exit saw the Toon Army turn on Ashley and his Cockney Mafia, one of its member being interim manager Joe Kinnear, who began his reign like this.

Kinnear was given the job until the end of the season before having to step down due to heart trouble. Chris Hughton stepped in once more before Alan Shearer was handed the task of saving Newcastle from relegation through the last eight games of the season.

Amid all the chaos upstairs, even with Michael Owen, Mark Viduka, Obafemi Martins, Damien Duff and Joey Barton, on the pitch the Magpies were floundering. After a 3-2 win at West Brom at the start of February left them snug in 13th place, Newcastle won only one of their remaining 13 matches to suffer a final-day relegation.

How did they react? Owen, Viduka, Duff and Martins formed part of an exodus and thanks to Hughton’s seemingly endless reserves of patience with those running Newcastle, the caretaker boss was made the permanent manager and he inspired the Magpies to finish a 102-point season as the Championship winners.

What happened next? All still on Ashley’s one-eyed watch, five seasons in the Premier League, including a fifth-place finish in 2012. Then history repeated itself and Newcastle were relegated in 18th before returning as Championship winners. Five years later, Ashley is finally gone and Newcastle are one of the richest clubs in the world.