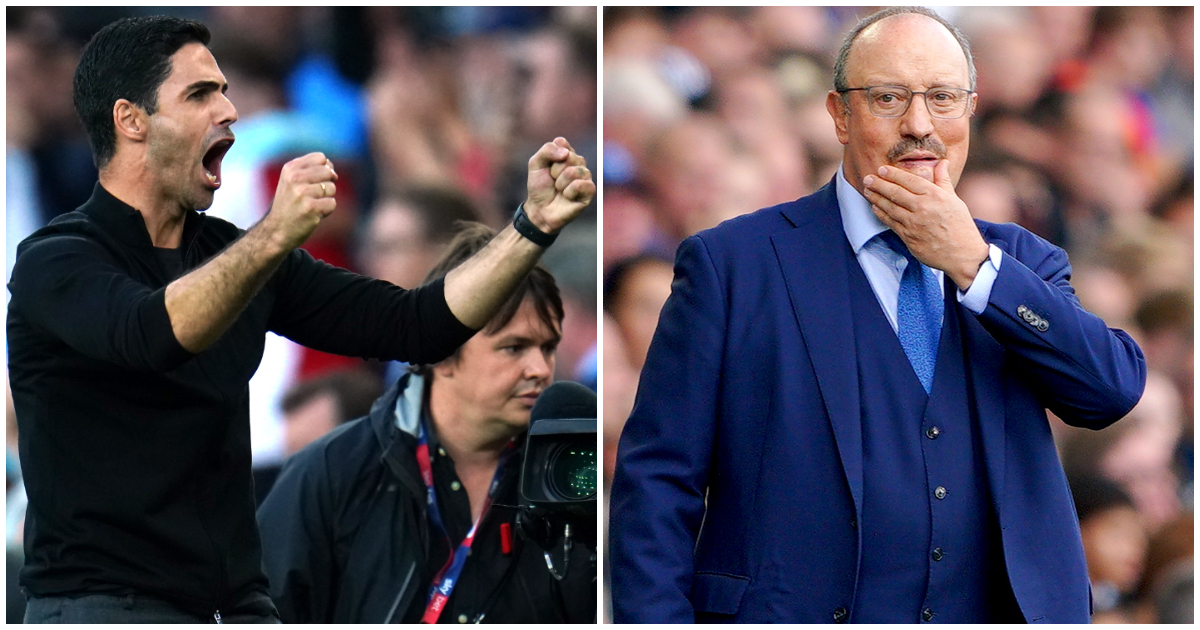 Mikel Arteta’s weakness could be a strength against an Everton side managed by a boss struggling to keep up. Alex Keble previews the tactical battle at Goodison Park.

Rafael Benitez was never a popular appointment at Everton but we at least expected a relatively safe pair of hands. In fact, the story of him crossing Stanley Park may have distracted us from closer analysis of whether he was ever a good fit from a tactical perspective. We knew he would tighten up the Carlo Ancelotti era, taking Everton into a more defensive place as a club, but did we stop to question if he had lost his touch altogether?

Ever since things unravelled at Liverpool over a decade ago Benitez’s career has been sketchy to say the least.

He was sacked within five months of taking over at Inter Milan, who had just won the treble but now languished in sixth. He won the Europa League in a brief interim stint at Chelsea, but lost the Club World Cup final and finished 14 points behind the title winners. Chelsea were four points adrift when he was appointed.

He finished third and fifth in two seasons at Napoli, lower than the club’s second-place finish the season before his arrival. He was sacked within six months of joining Real Madrid. His heavily-praised three-year stint at Newcastle United was instantly bettered by Steve Bruce, and finally he semi-retired in China before Everton came calling.

Benitez’s reactive counter-attacking football, his low block and minimal pressing, his reliance on individualism going forward and playing the percentages, might have worked in the 2000s – when Jose Mourinho defined an era of caution in European football – but it doesn’t work anymore. Perhaps it is a good fit for a relegation firefighter job, like Newcastle, but certainly not for a club as ambitious as Everton.

And this fact has been emphasised not by the club’s poor form but by the progressive appointments made in November at Newcastle, Aston Villa, Tottenham Hotspur, and Manchester United. All of a sudden, Everton look hopelessly left behind.

But this isn’t about fashion, as such. In the modern game players need to be pressing high and pushing up, to be playing on the front foot, in order to assert their authority on a game. Benitez’s style breeds low self-confidence and encourages players to withdraw into themselves, making the bad times worse.

This is particularly relevant ahead of Monday’s clash with Arsenal because Mikel Arteta’s side are peculiarly vulnerable to the psychological rhythm of a game; are strangely passive once they go a goal up, making them even flakier than Everton. This is the sort of game that Benitez’s side should attack, should hassle the Arsenal players until they start to retreat into their own third.

That’s what happened – yet again – on Thursday night, when Arsenal were completely on top until inexplicably moving into a defensive shape after scoring the opener. Man Utd were able to build back into a game that descended into chaos.

If there was ever a game to show Benitez is unsuited to the Premier League in 2021 it is this one; watch as Arsenal take control and, even when they try to give momentum away, somehow maintain it against a deep-lying Everton side with no interest in taking the game to the hosts.

The tactical battle seems to favour Arsenal in most areas. Arteta likes to play quick vertical football through the central column of the pitch, expecting Bukayo Saka and Emile Smith Rowe to roam infield to join Martin Odegaard, collecting the ball on the half turn and driving forward. This is arguably Everton’s weakest area recently, with Benitez’s two-man midfield not looking up to the task; Abdoulaye Doucoure and Allan will be over-worked.

The knock-on effect of Everton’s porous midfield is a disordered defence, largely because Michael Keane so often feels the need to step out of the back line to help. His positional errors are directly responsible for six of Everton’s concessions this season, and so, in the gaps he leaves, Pierre-Emerick Aubamayang has a good chance of rediscovering his goalscoring touch after going five games without a goal.

Of course, a pattern of dominant Arsenal possession and territory will theoretically give Everton the chance to counter-attack, but with Richarlison lacking match fitness and Dominic Calvert-Lewin and Lucas Digne still injured there aren’t many players for Arsenal to keep an eye on. Six of the 17 Premier League goals Everton have scored this season have been thanks to a moment of magic from Demarai Gray, and with Andros Townsend out of form, Gray really is the only weapon Everton have.

Attacking Arsenal’s right, and combining with Richarlison, Gray will need to get the better of Takehiro Tomiyasu in the game’s key head-to-head. Arteta’s new right-back, who tends to stay deeper to form a back three when the Gunners have possession, should be in the right place to shut Gray down.

It’s tough, in other words, to see a way for Everton to end their eight-game winless run. Benitez, a man left behind by the tactical zeitgeist, is running out of time at Goodison Park.