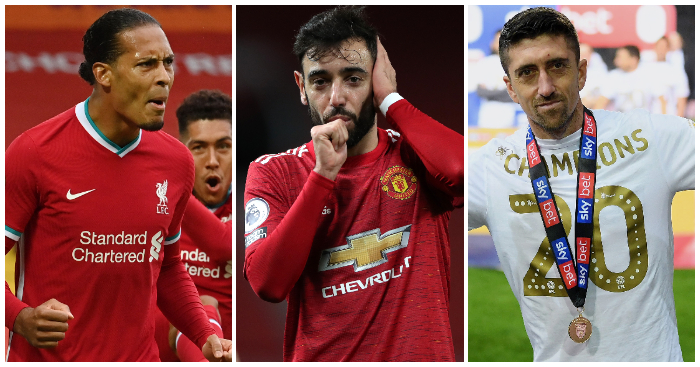 ARSENAL – Theo Walcott
Pierre-Emerick Aubameyang may wish to appeal this particular judgement since the club captain is one of the few truly world-class signings Arsenal have made in recent years. And our mates at Planet Football might want to debate the point should we ever see them again. But the past year, especially since singing a new deal in September, hasn’t gone according to plan – evidenced by the fact Arsenal are making plans for relegation. So for sheer value for money, return on investment and length of service, Walcott remains Arsenal’s greatest ever January signing. He joined as a 16-year-old for £9.1m in 2006, left as a 28-year-old for £20m in 2018, played 397 games, scored 108 goals and won four trophies in the intervening 12 years. Arsene Wenger mourned the loss of a “mental and moral leader” when he was sold to Everton; he made more Premier League appearances for Arsenal than Thierry Henry, and scored more Premier League goals for the Gunners than Robert Pires.

ASTON VILLA – Tyrone Mings
‘Perhaps, in time, it will be Tyrone Mings’ we wrote last year, while opting for Ashley Young. That time is probably now. Mings has established himself as one of England’s best centre-backs, having earned five more caps in addition to the two he was given at the back end of last year. For Villa, Dean Smith has found Mings a regular partner in Ezri Konsa and his performances and leadership were a large part of the reason Villa stayed up last term and a huge factor in their progress this term. This type of assertiveness is to be applauded too…

Good morning villains. I really hope all you who were berating and hounding El Ghazi enough to make him suspend his social media, are in his DM’s today, apologising. A team game utilises a WHOLE squad and we need everyone… may your apology be as loud as the disrespect.

BRIGHTON – Tariq Lamptey
“We’re really pleased to have secured the signing of a really exciting young talent,” said Graham Potter upon announcing the signing of Lamptey from Chelsea last year while most of us simply shrugged our shoulders. But the 20-year-old’s performances have made us all sit bolt upright and take notice, with some of Europe’s biggest clubs already looking to help Lamptey take the next step in his career. When the right-back does move on, perhaps in the summer, the Seagulls will make a huge profit on the £5million they paid Chelsea, who could not provide a pathway for both Lamptey and Reece James.

BURNLEY – James Tarkowski
Sean Dyche has brought in Charlie Austin, Ashley Barnes, Kieran Trippier, Michael Keane, Ashley Westwood and Robbie Brady in past January transfer windows, using the winter market to his advantage. But his most impressive purchase must surely be that of then-23-year-old Tarkowski, who transformed from Football League stalwart into fully-fledged England international at Turf Moor. Not many predicted he would be featuring for a World Cup semi-finalist while he was plodding around at Oldham and Brentford. Nor would they have thought he would be valued in the £50million bracket.

CHELSEA – Branislav Ivanovic
In an alternate universe, the January arrivals of Kevin de Bruyne (2012) and Mohamed Salah (2014) might have heralded a dawn of complete Chelsea dominance. But while the Blues have historically struggled to add another attacking dimension to their squad mid-season, they have fared much better with defensive reinforcements. Gary Cahill was a fantastic addition in 2012, perhaps bettered only by that of Ivanovic four years prior. The Serb spent nine years at Stamford Bridge, winning ten trophies in the process.

CRYSTAL PALACE – Wilfried Zaha
It will forever be weird that Wilfried Zaha’s first ever Premier League start was for Cardiff. He helped Crystal Palace earn Championship promotion in his final season before leaving for Manchester United in 2013. His well-documented struggles at Old Trafford meant he was loaned out twice and played just four times for David Moyes before returning to Selhurst Park on loan in August 2014. So it came as no surprise when that deal was made permanent in the following transfer window, with Zaha now Palace’s all-time record Premier League scorer with 43 goals.

EVERTON – Seamus Coleman
If it came down to sell-on value, then few could compete with John Stones – signed for £3m and sold for £47.5m within three-and-a-half years. But in terms of sheer value for money, Coleman pips his former team-mate. The Ireland international joined from Sligo Rovers for £60,000 as an unknown gamble, and soon became one of the Premier League’s best right-backs. He is still going strong under his 427th Goodison Park manager at the ripe old age of 32.

FULHAM – Brede Hangeland
The Cottagers have done well out of the January market. Brian McBride, Clint Dempsey and Aleksandar Mitrovic all arrived in the mid-season window, but Hangeland left the biggest mark on Craven Cottage. He was one of Roy Hodgson’s first signings at Fulham in 2008 from FC Copenhagen and the centre-back became a stalwart through one of the greatest periods in the club’s history. He made 270 appearances before he was released by Felix Magath, who Hangeland later claimed had instructed him to ease a thigh injury by placing a block of cheese on his leg. “I always try to see the good in people,” Hangeland said. “But Magath was an awful human being.”

LEEDS UNITED – Pablo Hernandez
United signed Hernandez initially on loan in summer 2016 but half a season was all it took to convince Garry Monk to make it a permanent arrangement in the first week of January 2017. In the subsequent three-and-a-half years, the Spanish midfielder became Leeds’ talisman, playing a huge role in their successful promotion campaign. The 35-year-old has been a peripheral figure this season due to injuries and Marcelo Bielsa’s refusal to take any sh*t in the wake of a petulant response to being hooked against Leicester. But unless he runs Bielsa over in the Thorp Arch car park, Hernandez’s legacy is secure.

LEICESTER – Wes Morgan
Three of the lynchpins in Claudio Ranieri’s title-winning band of misfits joined Leicester in previous January transfer windows. Riyad Mahrez signed from Le Havre for a nominal sum in the club’s promotion-winning season, and went on to be named Premier League Player of the Year two seasons later. But the framework for that incredible success was put in place by professional hard bastard Nigel Pearson who signed Morgan and Danny Drinkwater for a combined £2m within ten days of each other in 2012. Almost nine years on, the captain is still standing. And still holding off the challenge of Youri Tielemans in these stakes.

LIVERPOOL – Virgil van Dijk
It was once Luis Suarez, scorer, biter and racismer extraordinaire. But Van Dijk helped transform Liverpool entirely into the title winners and favourites they are today. The Reds have made bountiful use of the winter window – Philippe Coutinho, Daniel Sturridge, Maxi Rodriguez, Javier Mascherano, Daniel Agger, Steven Caulker – but Van Dijk remains the best investment of the lot.

MANCHESTER CITY – Edin Dzeko
“If the champion is City, then I would say a Man City player and if I have to choose, I choose Dzeko,” said Jose Mourinho when asked for his choice of Player of the Year in May 2014. “The kind of player he is, he’s not just a goal-scorer. He assists, he plays, he behaves, he’s fair, doesn’t dive, doesn’t try to put opponents in the stands with an accumulation of cards,” the Portuguese added, doing one of his weird winks in the general direction of eventual winner Luis Suarez. Dzeko arguably never earned the adulation he deserved at the Etihad, with a respectable 50 goals in 130 Premier League games, of which only 74 were starts. Only Sergio Aguero scored more goals (40) across the club’s first two title-winning seasons than the Bosnian (30).

MANCHESTER UNITED – Bruno Fernandes
Fernandes had to go some to edge out Daniel Storey’s best January signing ever but he has done just that by establishing himself as the most transformative arrival of the post-Sir Alex Ferguson era. After making his debut in February, in a Covid-hit year, the recruit from Sporting Lisbon has been our Premier League Player of 2020 having turned United from an unlikeable rabble into title contenders.

READ MORE: Bruno Fernandes is our Premier League player of 2020

NEWCASTLE – Martin Dubravka
Newcastle went into 2018 just one point clear of the relegation zone, but harnessed the boost provided by new players to finish in the top half. Kenedy was important, Islam Slimani was forgettable and Dubravka was vital.

The midfielder was United’s record signing last January when he arrived from Genk for around £20million and though that status now belongs to Rhian Brewster, Berge has been one of United best players in what has turned out to be a pretty wretched 2020. Made all the more so by the hamstring injury which is set to keep Berge out for three months. At least they’ll make a tidy profit on the Norway star should they fail to pull off one hell of an escape from relegation.

SOUTHAMPTON – Jose Fonte
Southampton knew they had pulled off quite the coup when they signed Jose Fonte from Crystal Palace for just over £1m in 2010. The club’s official website described it as a ‘significant capture’ of a player wanted by other sides ‘from a higher level’, before weirdly bragging that they had been ‘able to complete a signing in a professional and discreet manner’. They were in League One at the time; Premier League stalwart Fonte became a European champion with Portugal six years later.

TOTTENHAM – Dele Alli
Barely a single eyelid was batted when Tottenham rounded off a quiet January 2015 transfer window by making a teenage Dele Alli their only signing a matter of minutes before the deadline. The midfielder arrived from MK Dons with a huge reputation but was hardly expected to make his mark on the first team any time soon; he made his England debut later that year, is a two-time PFA Young Player of the Year, and only this season is he ineligible for that award. It’s just a shame that Jose doesn’t fancy him.

WEST BROM – Jake Livermore
It’s been a topsy-turvy four years for Livermore at The Hawthorns since he moved from Hull in 2017 for around £10million. But the midfielder has earned six England caps as a Baggie before becoming Slaven Bilic’s captain at the start of last season’s promotion campaign. How long he holds on to the armband after being sent off in Sam Allardyce’s first game in charge remains unclear.

WEST HAM – Nigel Reo-Coker
As comparatively poor as his final West Ham season was, Reo-Coker was far more impressive than his nickname would suggest at Upton Park. He almost helped the Hammers back into the Premier League upon his arrival from MK Dons in 2004, but was part of the side that would miss out in the play-off final. They went one step further the following season, and 12 months after that he was captaining the side in the 2006 FA Cup final. Then just 22, he was actually unfortunate to only be named on England’s standby list for the World Cup. Tomas Soucek, David Moyes’ ‘new Marouane Fellaini’, is eyeing up his place on this list for next year.

WOLVES – Sylvan Ebanks-Blake
Since the Premier League – and therefore football itself – was established in 1992, only three players have been the top goalscorer in England’s second tier more than once. Of that trio, only two have won the Golden Boot in consecutive seasons. John Aldridge worked wonders for Tranmere in the early 1990s, and Sylvan Ebanks-Blake took on the mantle with ease over a decade later. He netted 23 times in 2007/08 despite joining Wolves from Plymouth halfway through the season, then fired his new side to the Premier League with 25 goals in 2008/09. He really is one of the deadliest Championship strikers of all-time.