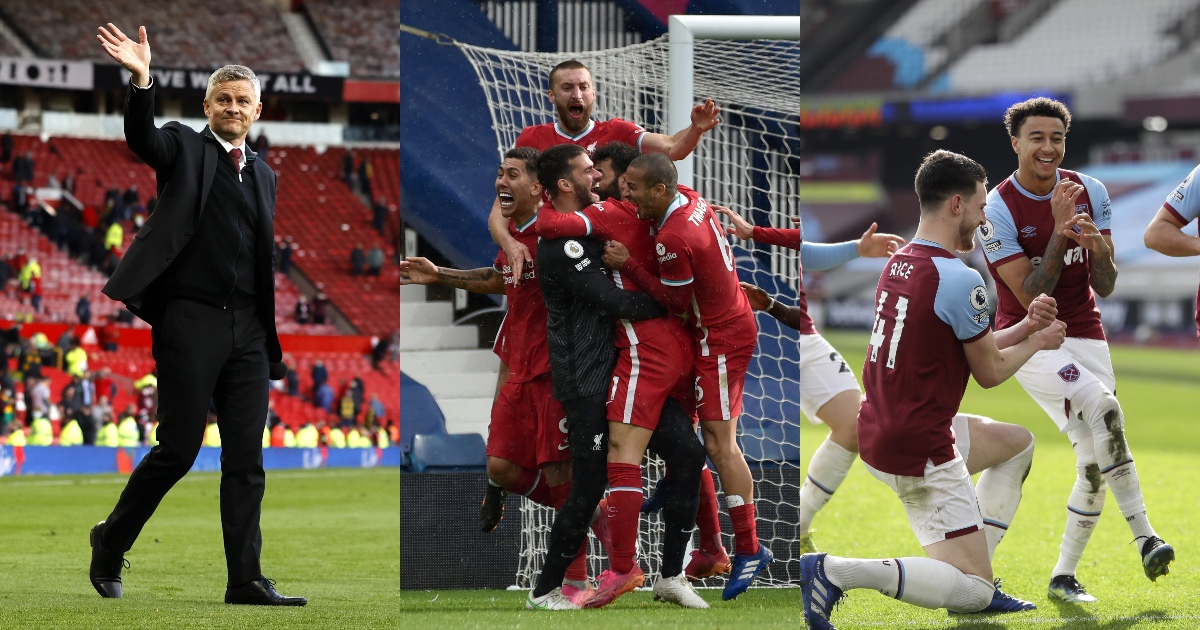 We will get to the worst moments, you schadenfreude lovers, but let’s start positive. Here’s every Premier League club’s best moment of 2021. Apologies to those relegated last season, you’re dead to us…

Arsenal – San Marino vs England
It was only San Marino, but it was the first time three Arsenal players had started for England since November 2014 when Danny Welbeck, Jack Wilshere and Alex Oxlade-Chamberlain played against Scotland, and it’s a far greater achievement for Aaron Ramsdale, Bukayo Saka and Emile Smith Rowe to be in the England squad now.

Aston Villa – Fernandes’ missed penalty
A game of half-football, half-basketball at Old Trafford in September ended with a delicious moment for the travelling Villa fans. After Kortney Hause’s 88th-minute header, the Villa centre-back (literally) handed Manchester United the chance of a last-gasp equaliser, only for Bruno Fernandes to sky his penalty effort miles over the bar.

Brentford – Toney stroking in the Wembley penalty
Emiliano Marcondes finished off a quite brilliant counter-attacking move to make it 2-0 against Swansea in the play-off final, but the game never looked in doubt after the tenth minute, when the man Thomas Frank describes as “the best penalty taker in the world” stroked the ball in from the spot. It was quite the way for Ivan Toney to round off his record-breaking season.

Brighton – Dan Burn’s Man City winner
Brighton were 2-0 down to City before a fine solo goal from Leandro Trossard and Adam Webster’s header drew them level. Then came Dan Burn’s first goal for the club, with the giant Seagull eventually sending sufficient signals to his feet to produce a save from Ederson, before bundling in the rebound.

Burnley – Dyche vs Klopp
Jurgen Klopp described his side’s defeat to Burnley in January as a “massive punch in the face” and the Liverpool boss appeared to fancy a bit of a tunnel scuffle with Sean Dyche at half-time. Burnley dug in, came out on top and as Dyche explained post-match, “we’re allowed to fight, you know”.

Chelsea – Kai Havertz in Porto
A 21-year-old, after a rough first season away from home in the Premier League, had just scored the most important goal he will ever score and was asked whether he was relieved with a record transfer fee hanging over him. “I don’t give a f***, we just won the f***ing Champiions League.” Well said, Kai.

Everton – The end of the Anfield hoodoo
Everton won a game at Anfield for the first time this century.

Leeds – Dallas’ Etihad brace
Manchester City had lost just one of their last 23 Premier League games ahead of Leeds turning up at the Etihad, winning 20 of them. Despite Dallas giving Leeds the lead it looked inevitable City would end up winning once again after Liam Cooper was sent off and Ferran Torres equalised. But Dallas latched on to a brilliant through ball from Ezgjan Alioski in stoppage time to slot the ball under Ederson and send beers flying in living rooms across West Yorkshire.

Liverpool – Alisson’s header
The goalkeeper came up for a corner to save Liverpool’s season. Given what Alisson had been through with the tragic death of his father just three months prior, surely the best of all the 2021 moments.

Here it is… Alisson’s remarkable header deep into injury-time that handed Liverpool an incredible 2-1 victory over West Brom! 🇧🇷 ⚽

Manchester City – The winning run
Sure, it’s not a moment, but take your pick. There were plenty: 15 wins in a row; 37 goals scored; five goals conceded.

Manchester United – Sacking Ole Gunnar Solskjaer
Did a fine job but United should have taken him out back a while before they actually did. Too early to judge Ralf Rangnick entirely, but not too early to judge him as a better option than Solskjaer.

Newcastle – Getting rid of Mike Ashley
He was a poisonous pr*ck who put paid to the phrase ‘be careful what you wish for’ – anyone was better than Ashley to Toon fans.

Norwich – Promotion to the Premier League
The Championship is child’s play to Norwich these days; they won it last season at a canter. If only there was somewhere else for them to be promoted to.

An emotional Ralph Hasenhuttl sinks to his knees after beating Liverpool. That win meant everything 😢

Tottenham – The Lamela Rabona
The Goal of the Season unspoiled by Alan Smith’s “trundling” punditry.

Watford – Signing Emmanuel Dennis
The £4.5million signing’s best tally of goals in a full season is seven; his best tally of assists is four. After 15 Premier League games he has seven goals and five assists. Bravo, Watford scouts.

West Ham – Lingard leading the Hammers band
Jesse Lingard on clarinet, Declan Rice on drums, Pablo Fornals on guitar. Lingard’s goal against Spurs lifted West Ham above Chelsea into fourth in the Premier League table. They couldn’t stay there, but the celebration marked the point when David Moyes’ side were taken seriously as European contenders.

Dancing through the defence 🕺