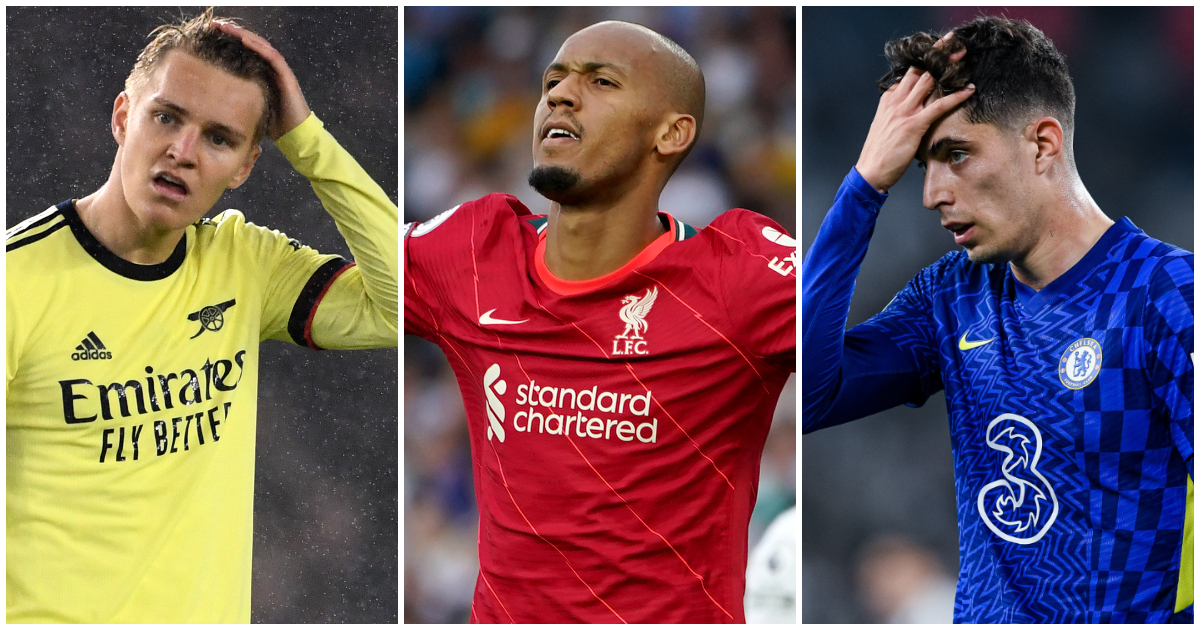 Arsenal spent all that time chasing Martin Odegaard when they could have just trusted Emile Smith Rowe. Liverpool and Chelsea won’t be too concerned over theirs…

The Premier League season is three months old, so we’ve picked out every club’s worst-performing player so far according to WhoScored ratings. To qualify, players must have played a minimum of half their team’s league minutes. The best are here.

Arsenal: Martin Odegaard – 6.46
Arsenal’s best player Emile Smith Rowe has stolen Odegaard’s thunder somewhat since the Norway star made his move from Real Madrid a permanent arrangement. Smith Rowe has had a hand in six goals; Odegaard has scored once and is yet to offer an assist. Though the playmaker would have doubled his goals tally against Watford on Sunday had Pierre-Emerick Aubameyang not had one of his moments.

Aston Villa: Axel Tuanzebe – 6.22
The defender, on loan from Manchester United, just meets the minimum minutes requirement by 180 seconds. Dean Smith never seemed entirely convinced by Tuanzebe, but few of his centre-backs have been in good form. Tyrone Mings was dropped for Smith’s final home game in charge, with the former manager flitting between back threes and fours.

Brentford: Frank Onyeka – 6.43
After three successive Premier League defeats, Frank the Tank was dropped to the bench last weekend by Thomas Frank; though his replacement, Mathias Jensen, hardly did himself any favours in the defeat to Norwich.

Brighton: Jakub Moder – 6.28
After forcing his way into Graham Potter’s XI with some impressive performances off the bench across a variety of midfield roles, Moder struggled to grasp his opportunity, and after four straight starts, the Poland midfielder was sat back on the bench for the visit of Newcastle on Saturday.

Burnley: Johann Gudmundsson – 6.41
A few semi-regular Clarets have rated worse than Gudmundsson, with Jack Cork averaging under 6 in his four appearances. But the brick-headed midfielder has played a part in every Burnley game this season, even if his form saw Sean Dyche start him on the bench for four of the last six matches.

Chelsea: Kai Havertz – 6.77
There’ll be little fretting at Stamford Bridge over Havertz’s start to the season. He scored against Burnley at the weekend and was one of the Blues’ better players, indicating a possible return to form. N’Golo Kante has the same average score but the France midfielder has played fewer than half the Blues’ Premier League minutes.

Crystal Palace: Joachim Andersen – 6.51
The Palace centre-back appears to have come through a sticky patch either side of the last international break, which began with a couple of errors in the draw with Leicester. Since averaging 5.92 through three games, Andersen has been back in the 7s while keeping clean sheets against Manchester City and Wolves.

Everton: Alex Iwobi – 6.45
Some players you watch semi-regularly and think ‘what am I missing with this fella?’. Iwobi is one of those players. How Arsenal got Everton to cough up £30million for the winger is a mystery. That said, he made perhaps Everton’s only positive contribution by scoring against Wolves last Monday night, though that was his first goal in 24 appearances and only his second shot on target all season.

Leeds: Junior Firpo – 6.29
Marcelo Bielsa’s personal marks tally up with Whoscored’s. “With regards to his evolution in the team, he hasn’t been able to play a seven-point performance, but he also hasn’t played below a six-performance,” said the manager. “He’s had a regular performance and he’s grown, but below what he’s capable of doing.”

Leicester: Daniel Amartey – 6.21
Leicester fans might disagree with the assertion that Amartey has been their least impressive regular. The defender has started in all four of the Foxes’ victories in the Premier League – seven in all competitions – but they have drawn three and lost a couple when the Ghanaian has started on the bench or missed out altogether. Brendan Rodgers certainly rates Amartey: “Daniel’s been brilliant,” the manager said before their last win at Brentford. “In terms of his contribution, he’s been absolutely fantastic.”

Liverpool: Fabinho – 6.81
Fabinho ranks just below 6.83-rated Andy Robertson – the Mailbox reckons the Scotland international should be dropped – and Alisson on 6.84 in the average ratings for Liverpool’s regulars. Alisson’s brain fart at West Ham certainly hurt his score and put him in the sticks for the worst XI of the Premier League weekend.

Manchester City: Aymeric Laporte – 6.61
The Spain defender is rated narrowly below Ederson, though he stitched himself up with a 4.15 performance against Crystal Palace in 45 minutes which saw him give away a goal then haul down Wilf Zaha to earn a straight red. Now Laporte faces the task once again of dislodging Ruben Dias and John Stones, who played the derby in their slippers and robes.

Manchester United: Victor Lindelof – 6.46
The Sweden defender is the lowest scorer of the qualifying players, but of those who haven’t achieved the requisite minutes, Anthony Martial, Edinson Cavani, Marcus Rashford and Jadon Sancho have all averaged lower.

Newcastle: Jamaal Lascelles – 6.4
Not all that long ago, Lascelles was being touted for an England call-up. Now he’s the lowest-rated performer in the the Premier League’s second-worst defence. To be fair to the Newcastle skipper, his usual centre-back partners are averaging lower scores but none have played the minimum game time to qualify.

Norwich: Josh Sargent – 6.2
All but one of the Norwich players are averaging in the 6s, with Mathias Normann the only player to scrape a 7. It has been a tough start to Premier League life for Sargent, who is yet to score or offer an assist. In the Norwich squad, he is ninth for shots per game and eight for key passes per game.

Southampton: Adam Armstrong – 6.67
In fairness to the Southampton new boy, only Havertz and Fabinho are averaging higher scores on this list, and there are 10 Saints with lower average scores but none have achieved the minimum game time. Armstrong has two goals and an assist to his name this season and a man of the match award.

Tottenham: Oliver Skipp – 6.46
If you asked some Spurs fans after Antonio Conte’s first Premier League game in charge at Everton, many would argue that Skipp should start over their highest average-rating player in midfield. Not against Leeds next time out, mind, since Skipp has got himself suspended.

Watford: Craig Cathcart – 6.37
Of Watford’s 14 average lowest ratings, only Cathcart has played the minimum minutes required to make this list. But this was written in alphabetical order so you can whistle if you think we’re changing the goalposts now.

West Ham: Vladimir Coufal – 6.64
Coufal was outstanding last season and he’s been perfectly adequate in West Ham’s wonderful start to the season, but the right-back has struggled to regain his place in the side after injury. Not that he’s complaining: “Ben Johnson did really well when I was injured, he played really well. I need to praise him because he scored a goal and he did really well in defence, so very, very good.”

Wolves: Conor Coady – 6.58
Coady’s form has hardly been his most impressive this season but the shouty centre-back remains one of Gareth Southgate’s favourites and Bruno Lage is yet to see fit to drop his skipper.