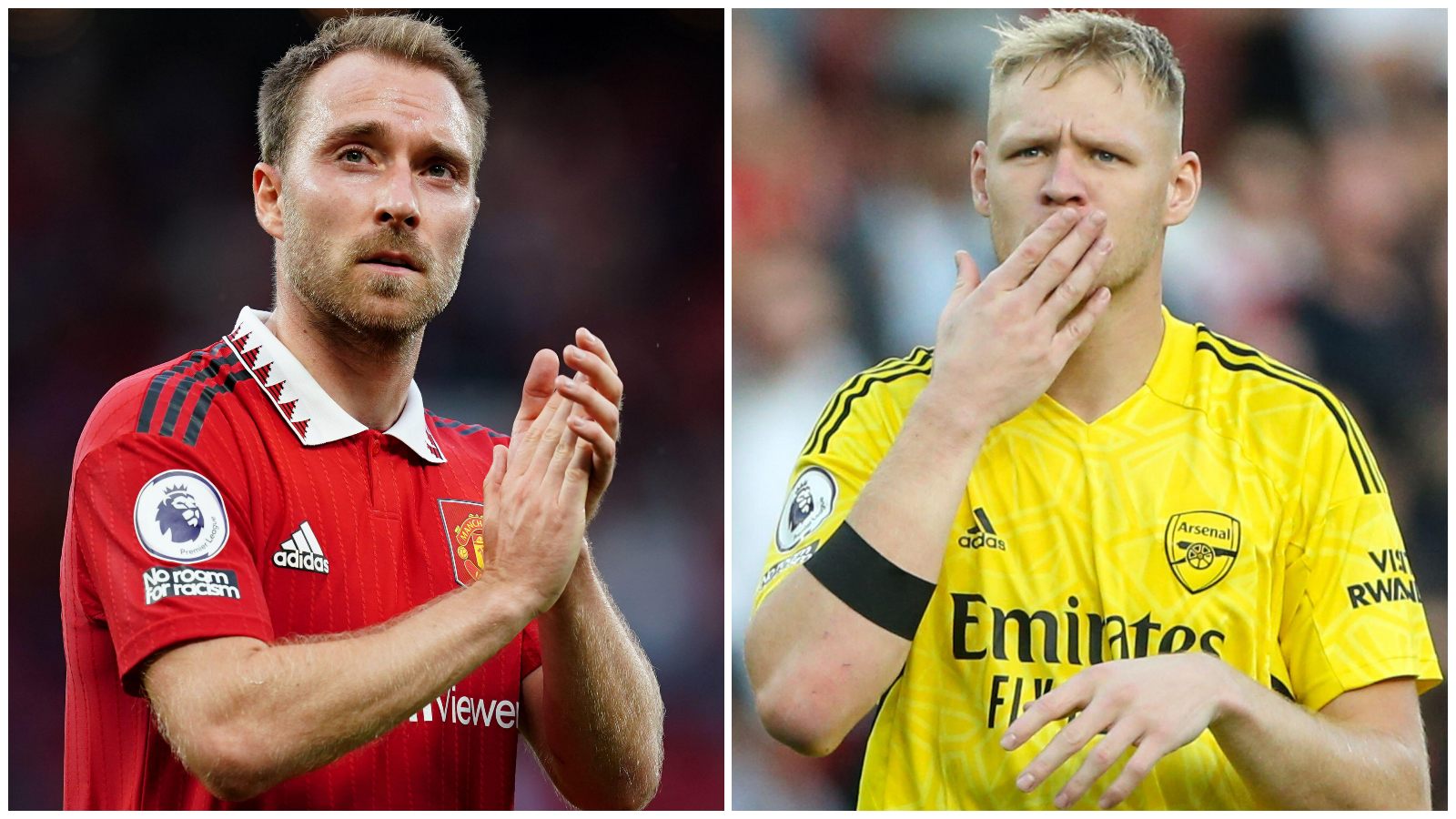 Christian Eriksen has been one of Man Utd’s better players this season but the algorithms aren’t impressed. And this isn’t great timing for Aaron Ramsdale.

Here is every Premier League club’s lowest-rated player through the start of the season, according to WhoScored. Only players who have played at least half of their team’s minutes are eligible…

The best are here.

Arsenal: Aaron Ramsdale – 6.48
The Arsenal keeper hasn’t been so bad through the start of the season, though a couple of sub-six scores – against Leicester and Manchester United – have done him no favours. Not a good look when Jordan Pickford is one of the league’s highest-rating players.

Bournemouth: Mark Travers – 6.19
Poor lad. Travers played four games, three of them against City, Arsenal and Liverpool, in which he conceded 16 goals. Few were directly his fault but he still found himself dropped for Neto once Scott Parker had been given the shove.

Brentford: Yoane Wissa – 6.45
Two goals and an assist in his last four games suggest Wissa hasn’t been bad. A 5.74 in the draw with Brentford seems to have done for the Congolese forward; Thomas Frank is unlikely to be too concerned.

Brighton: Lewis Dunk – 6.55
The joint-highest score on this list suggests Dunk just hasn’t been as brilliant as his Brighton team-mates through a fine start to the season during which he’s played every minute. Nothing to see here.

Chelsea: Jorginho – 6.47
Thomas Tuchel struggled to get his midfield balance right during the opening few weeks – he paid with his job – and Jorginho has struggled as a result. The Italian was benched for Tuchel’s final Premier League game in charge and faces a fight to win Graham Potter’s trust, especially since his contract expires at the end of the season.

Crystal Palace: Nathaniel Clyne – 6.23
Patrick Vieira is yet to settle on his full-backs this term, with Clyne starting four of the first five games before being benched again at Newcastle. There, he came on to replace Tyrick Mitchell at left-back with the youngster struggling to replicate his fine form of last season. Both found themselves in the weekend’s worst XI after the Eagles blew a two-goal lead at City.

Everton: Tom Davies – 6.31
Davies playing so often through the winless start of the season perhaps highlighted Everton’s weakness in midfield, which they have since addressed with the signings of Idrissa Gueye, James Garner and Amadou Onana. Chuck in Abdoulaye Doucoure, Allan and Alex Iwobi and Frank Lampard has plenty of options, which could leave Davies struggling to maintain his recent level of involvement.

Fulham: Harrison Reed – 6.30
The Fulham midfielder has played every minute during Fulham’s impressive start to the season and Marco Silva is unlikely to be too worried by Reed’s appearance here. Eleven Cottagers have averaged a lower score but haven’t had the requisite involvement. Giving the ball away an average of 13.3 times per game hasn’t helped the 27-year-old’s cause.

Leeds: Diego Llorente – 6.47
The Spain defender has tripped over his own feet a couple of times already this season as Leeds have conceded. Jesse Marsch tried to back his rearguard after they shipped five at Brentford: “Sometimes we put our centre-backs in difficult situations,” he said, but Llorente has made a couple of basic errors against the Bees and Everton.

Leicester: Danny Ward – 5.81
Leicester’s best performer had the lowest score among the league’s highest-rated players and it’s a similar story for their worst performer. Ward hasn’t been helped by the sh*tshow in front of him but last season’s stand-in has struggled to spread any confidence after stepping up to replace Kasper Schmeichel. Half of his six appearances have resulted in sub-six scores.

Liverpool: Alisson – 6.55
Alisson is the least of Jurgen Klopp’s worries. James Milner averages a lower score (6.41) but the veteran has played two minutes short of the minimum required. He’s one of several Liverpool players out of contract next summer.

Manchester City: Ederson – 6.50
The City stopper has faced only 11 shots on target but has conceded six goals. With a save percentage of 45.5, he ranks 20th out of the 23 keepers to have played this term.

Manchester United: Christian Eriksen 6.48
This is obviously horsesh*t. Eriksen has been one of United’s better performers this season. He hasn’t been credited with assists despite playing huge roles in goals for Antony and Marcus Rashford, while his error leading to a goal was primarily David De Gea’s fault.

Newcastle: Sean Longstaff – 6.46
The Newcastle academy graduate, once rated at £50million by Mike Ashley, has served as a stand-in for Bruno Guimaraes – hardly a like-for-like replacement. Longstaff has grafted but Newcastle’s midfield has looked stodgy in the Brazilian’s absence.

Nottingham Forest: Scott McKenna – 6.17
Ten Reds have a lower score than the centre-back, four who have played more than 100 minutes. Taiwo Awoniyi has the same average rating but is nine minutes shy of being eligible for this list. So McKenna comes in having played every minute for Forest.

Southampton: Adam Armstrong – 6.46
It’s a similar story for Armstrong – nine Saints have a lower average rating than the striker who has a goal (a winner against Chelsea) and an assist to his name from six appearances in which he has an xG of 0.4.

Tottenham: Ryan Sessegnon – 6.51
The Spurs wing-back has perhaps played more often than many expected this season, with three starts and a couple of appearances off the bench. Still, though, he has yet to find a team-mate with a cross and though he has scored, Sessegnon has also missed a couple of big chances.

Wolves: Goncalo Guedes – 6.38
The Wolves new boy is finding his feet in the Premier League and he’s chucked in an assist in three starts and a couple of substitute appearances. Bruno Lage has made wholesale changes to his attack but Wolves need Guedes and the other new boys to catch on quick.