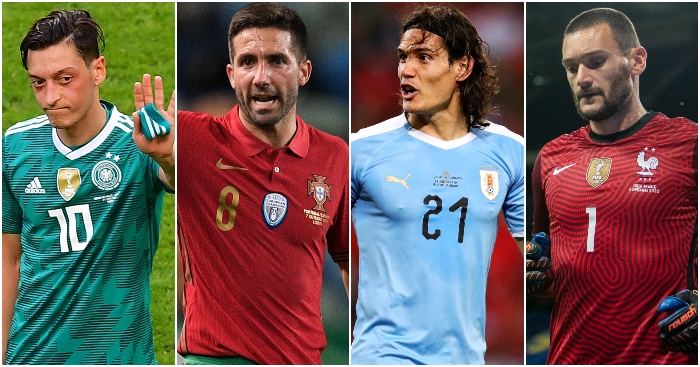 Ozil can’t get a game for Arsenal and he chose to end his Germany career prematurely over the ‘racism and disrespect’ he faced over his Turkish roots. The playmaker recorded 23 goals and 40 assists in 92 caps, two appearances ahead of Sokratis’s total for Greece.

The new boy brought with him to Villa Park 52 caps for Burkina Faso. Despite being only 25, Traore has been a senior international for almost a decade having made his national team debut aged just 15. Another right winger, Trezeguet, is second among the Villans’ most-experienced internationals with 44 caps for Egypt.

The Australia keeper with 52 caps remains first choice for his country though he might be considered fortunate that his ropey form for Brighton has coincided with a hiatus for the Socceroos. They last played a day short of a year ago and their entire programme for 2020 has been postponed.

The 30-year-old has 77 caps for Iceland, the latest coming this week in the heartbreaking, late surrender to Hungry in the Euro 2020 qualification play-offs.

In contrast, you can’t move for internationals at Chelsea, with Giroud the most senior among them. For a striker who doesn’t score goals, he’s scored a lot of goals. The centre-forward has overtaken Michel Platini in the goalscoring stakes with a brace against Ukraine on his 100th cap last month to reach a tally of 42. Now on 103 caps, he is nine short of Thierry Henry as his country’s highest scorer, while matching Henry’s rate of 0.41 goals per game.

The Wales goalkeeper has already taken Neville Southall’s clean sheets record and now Hennessey is eyeing Big Nev’s place in the caps table. With 91 appearances, Hennessey is just one short of Southall, who is second only to Chris Gunter as Wales’ most-capped player.

Sigurdsson scored this week for Iceland as he edged one ahead of James Rodriguez’s running total of 76 caps for Colombia. The fact he has three more international goals than Rodriguez will come as little consolation after Iceland chucked away the lead given to them by Sigurdsson – helped by Peter Gulacsi’s popadom hands – in the dying minutes in Hungry.

The Serbia hitman earned his 60th cap on Thursday night and marked it by missing the crucial spot-kick that sent Scotland to the Euros. With 36 goals he is just two short of his country’s goalscoring record which has stood for 66 years.

Northern Ireland’s current International Personality of the Year earned his 45th cap in the Euro 2020 play-off decider against Slovakia on Thursday. His night went little better than Mitrovic’s or Sigurdsson’s.

Evans earned his 85th cap alongside Dallas at Windsor Park but ‘Northern Ireland’s best ever defender’, according to Aaron Hughes, is still someway short of Steven Davis’s 122.

The Switzerland winger is a 10-year veteran in international football, with 22 goals in 85 caps. It’s nice that he gets a game somewhere…

Throwing it back to Shaqiri's outrageous overhead kick from Euro 2016 👀 pic.twitter.com/r8BEKZ66fI

The City striker is three caps short of 100. Aguero could have moved to 99 had he been fit for the World Cup qualifiers against Peru and Paraguay this week but the striker will have to wait until next year to add to his 41 international goals.

Sergio Romero used to be United’s most-experienced international before Cavani swanned in with all his caps. Romero last played for Argentina two years ago and is stuck four short of a century while Cavani, almost 12 years to the day since his Uruguay debut, is currently on 116 caps and 50 goals.

🇺🇾 Cavani with a big time winner for Uruguay!

The right-back has amassed 62 caps for United States following his debut in 2014 under Jurgen Klinsmann but he admitted in June while protests were ongoing over racial inequality that he was considering ending his international career: “It’s hard for me as an African-American male to represent a country that does things like this where all people aren’t equal.”

The 28-year-old midfielder brought the curtain down on his Northern Ireland career last year, deciding 57 caps was enough. Michael O’Neill disagreed: “He had the opportunity to leave an incredible legacy and reach 100 caps.”

The Republic of Ireland striker earned his 85th cap when he was chosen for his first start in almost two years when Wales visited Dublin last month.

Who could forget Shane Long against Germany? 🇮🇪 🇩🇪

Behind every goal there's a story 💚

Spurs have within their ranks a couple of international centurions with Toby Alderweireld on 102 caps for Belgium. But Lloris has amassed 118 for France. The goalkeeper needs another 24 to match Les Bleus‘ record caps holder Lilian Thuram.

The former Serbia defender brings some much-needed experience to a Baggies squad short on current internationals. Ivanovic earned 105 caps – a Serbia record – before retiring from national duty after the 2018 World Cup.

The Ukraine winger with 38 international goals missed out on the chance to earn his 93rd cap when coronavirus ruled him out of the visit to Germany on Saturday.

The beautiful, brilliant Portugal midfielder drew level with Luis Figo this week on 127 caps, with only Cristiano Ronaldo (167 appearances) representing his country more often. Moutinho’s international career spans back to 2005, a year before Figo called it a day.