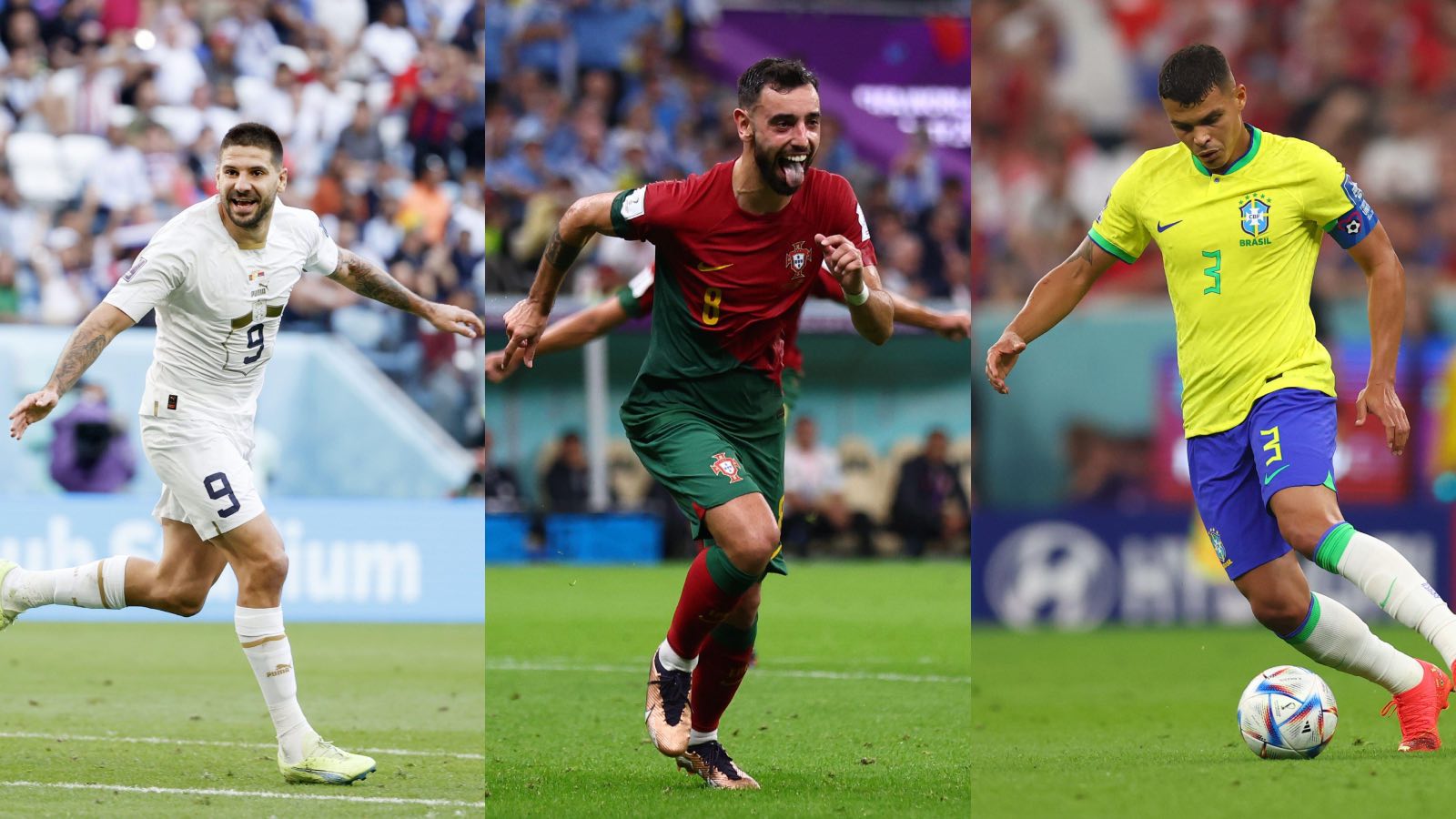 Jumping the gun a bit, but we reckon these are each Premier League team’s player of the World Cup, from a centre-back conceding seven goals in three games to a guy we can’t believe plays for Brighton…

Arsenal: Bukayo Saka (England)
Luke Shaw said what we were all thinking: “I would just love it if he was my child.” From the looks of it, Saka is just as important to England off the pitch as on it. His ‘Spelling School’ has his teammates in stitches and he appears to be that guy in the group everyone wants to sit next to at lunch. We bet he would give a great hug, but he would be in danger of us never letting go. He’s also been at his slippery best on the pitch for England, with a starring role against France. Please, please, please let him smash in his next penalty.

Aston Villa: Emiliano Martinez (Argentina)
Matty Cash was the man until Emiliano Martinez knocked him off his perch with his penalty heroics for Argentina against the Netherlands and his blunt advice for Louis van Gaal.

Bournemouth: Kieffer Moore (Wales)
Slim pickings for Bournemouth, whose only other option was compatriot Chris Mepham, who was fine, but Moore gets the nod for his 45 minutes against the USA. He entirely changed the game for Wales, who had been battered in the first half before Moore came on, ran the channels and held the ball up. We’re not convinced he touched the ball in the next 180 minutes against Iran and England, but hey-ho.

Brentford: Bryan Mbeumo (Cameroon)
The Brentford Danes didn’t really do all that much. Let’s face it, Denmark didn’t do all that much. David Raya didn’t get on for Spain and Saman Ghoddos played just 45 minutes for Iran. So, Mbeumo gets in, sort of by default, though he did typical Mbeumo type things: running fast (occasionally too fast to keep the ball under control) and getting into good positions before making poor decisions.

Brighton: Alexis Mac Allister (Argentina)
Let us first address the elephant in the room: it is proper weird that a player starting, scoring and winning alongside possibly the greatest footballer of all time for Argentina plays for Brighton. It makes no sense. To outplay said greatest footballer of all time in the crunch game against Poland to prevent mass hysteria and a national crisis makes even less sense. A Brighton World Cup winner? Come on now.

Chelsea: Thiago Silva (Brazil)
The Chelsea players are rather enjoying their time away from Stamford Bridge this winter. Christian Pulisic, Kai Havertz, Raheem Sterling and Hakim Ziyech have scored or assisted eight goals in Qatar so far, compared to nine in the Premier League. Mateo Kovacic has been excellent for Croatia (as has the guy who could now be a Chelsea player) and Kalidou Koulibaly illustrated leadership and guts for Senegal which he’s lacked for the Blues.

But Brazil had conceded just one goal in the three games Silva played before Croatia’s late, late equaliser in the quarter-final which proved so costly. Silva also played the pass of the tournament so far, perfectly zipping a first-time ball into Richarlison for that beauty against South Korea.

Crystal Palace: Jordan Ayew (Ghana)
Joachim Andersen can perhaps count himself a little unlucky, but Ayew gets the nod after his two sublime crosses helped Ghana to their 3-2 win over South Korea.

Everton: Jordan Pickford (England)
Easy to forget that he kept England in the game in the first half against Senegal and Pickford now manages to keep his goalkeeper madness – which for a long time made us all uneasy – at the perfect level, shouting effusively at his defence when required but remaining calm enough to make the right decisions pretty much all the time.

Fulham: Aleksandar Mitrovic (Serbia)
52 goals in 79 international appearances is a stunning record, and the fact that he keeps £70m Juventus striker Dusan Vlahovic out of the side is a telling indication of the esteem in which he’s held for the national team. His header in the defeat to Switzerland was a thing of pure beauty.

Leeds: Tyler Adams (USA)
The best midfielder on the pitch in the 0-0 draw with England, which is quite something when you’re up against a couple of Three Lions with a combined value of well over £200m. A young captain leading a young team who could be peaking at the point they become hosts.

Leicester: Nampalys Mendy (Senegal)
Mendy is far more influential for Senegal than he’s ever been for Leicester but was really the only option in any case, as James Maddison has predictably not played for England, the Belgian trio played for Belgium, and Danny Ward somehow managed to concede two goals in three minutes against Iran before another three against England.

Liverpool: Virgil van Dijk (Netherlands)
As has been the case for Liverpool this season, Van Dijk looked short of his imperious best in Qatar before seeing his penalty saved by Martinez in the quarter-final shootout. Did Jordan Henderson do quite enough to usurp him? No.

Manchester City: Julian Alvarez (Argentina)
John Stones held this spot for a while but Erling Haaland’s understudy is now in a World Cup final and has perhaps played the biggest role in getting them there other than the guy this World Cup is now entirely about. After he scored the worst best goal of all time and a tap-in after one of the great assists from Lionel Messi, Alvarez needs a brace in the final to usurp the little maestro in the race for the Golden Boot.

Manchester United: Bruno Fernandes (Portugal)
Manchester United players have had an excellent tournament in general. Casemiro, Maguire, Marcus Rashford, Lisandro Martinez, Diogo Dalot and Luke Shaw have all starred for their countries, but Bruno has a case for being the very best player from the Premier League. Portugal revolve around him rather than his petulant former club (and hopefully international) teammate.

Newcastle: Kieran Trippier (England)
Performed admirably in the opening two games, but made way for Kyle Walker and had no way back in once Gareth Southgate resisted the temptation to go for a back three against France. Walker had enough about him to keep Kylian Mbappe quiet, but it still wasn’t quite enough for England.

Nottingham Forest: Neco Williams (Wales)
Surprising in a way that Forest only had just five players at the World Cup, but we fully expect them to pick up three or four Saudi Arabians in more panic-buying in January. Williams was alright, wasn’t he? Don’t know.

Southampton: Mohammed Salisu (Ghana)
Played every minute at centre-back for Ghana in a World Cup in which they conceded seven goals in three games. It doesn’t sound great, and isn’t, but he did score in their win over South Korea and the Saints alternative, Armel Bella-Kotchap, watched all of the German sh*t from the bench.

Tottenham: Richarlison (Brazil)
It doesn’t feel right that Tottenham’s fourth-choice forward is the new old Ronaldo for Brazil, but rival fans in the Premier League can take solace in the knowledge that Richarlison has never, or will ever, play this well for Spurs as Antonio Conte will give him a backhander if he dances anywhere near him. He prepared for his return to Spurs in the quarter-final, by being a bit rubbish.

West Ham: Lucas Paqueta (Brazil)
There has perhaps never been a greater indicator of the draw of the Premier League than Lucas Paqueta joining West Ham United to play under David Moyes. I mean, what was he thinking?

Wolves: Ruben Neves (Portugal)
Romain Saiss would easily be Wolves’ player of the tournament if they hadn’t perplexingly let him leave for nothing in the summer, but you have to be quite a player to sit in Portugal’s midfield and Neves is quite a player.