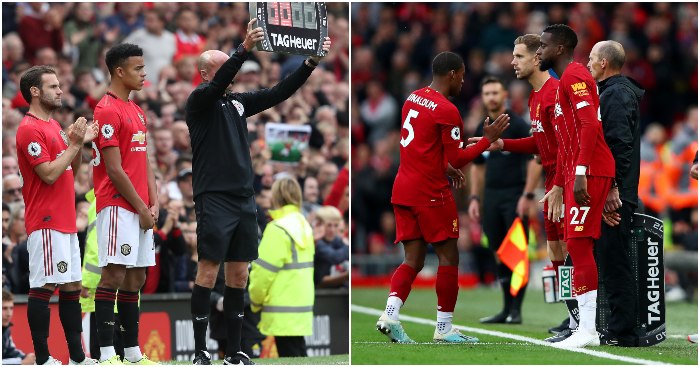 A Manchester United striker narrowly edges out a Liverpool forward for the title of most-used substitute. Here’s every club’s most used replacement…

Mikel Arteta and Unai Emery’s favourite substitute has completed 90 minutes only once in 19 Premier League appearances this season. We are not sure we would file him under ‘impact sub’.

Trezeguet has offered two assists in his 11 appearances off the bench while Douglas Luiz has scored twice as a substitute.

Eddie Howe is still waiting for Solanke to find the net, as a starter or substitute. Time for a new Plan B…

Despite being linked with a move away in January, Murray has proved that he still has his uses. Only once has the veteran not been involved on a Premier League match-day and only nine times has he not seen any action.

Rodriguez has spent 354 minutes on the pitch as a replacement this season, longer than anyone else in the Premier League.

A little more variety here compared to last season, when Kovacic and Ross Barkley just took it turns to swap on the hour every hour.

Roy Hodgson breaking the mould again as one of the few managers not to turn most often to a winger or forward. Roy’s all about the reliability.

Most of Kean’s appearances have come off the bench but his most memorable moment of the season was when Big Dunc summoned him back there at Old Trafford.

Gray has been trying to rid himself of the perennial replacement tag, and he’s sort of succeeded; Brendan Rodgers hasn’t bothered using him for the last seven matches.

Only Mason Greenwood has been dispatched from the bench more often than Origi but the big man has only contributed to one goal as a sub compared to five as a starter.

Jesus has scored 10 goals this season – but only one off the bench.

Greenwood is the Premier League’s most regular substitute. He’s netted three goals in 341 minutes as a replacement.

Hardly a surprise that centre-forwards feature so prominently since Joelinton inevitably requires replacing at some point in each game.

Drmic would love to score a goal before Norwich go down, but presumably he’d settle just for starting a game at some point.

Chris Wilder there, rotating his centre-forwards. But not the one who hasn’t scored yet…

Subbed on 14 times; replaced eight times; no goals yet for Adams.

Not everyone at Watford has been lifted by Nigel Pearson’s arrival. Gray had played 663 minutes, starting as many games as he’d come off the bench, but since has Pearson come in, he’s scratched together 54 minutes…all as a replacement.

Fornals has been in and out of the West Ham side this season, but he seems to have convinced David Moyes that he can do a job on the left.

Cutrone cut his losses in January and returned to Italy after a half-season during which he never managed to complete 90 minutes in the Premier League.