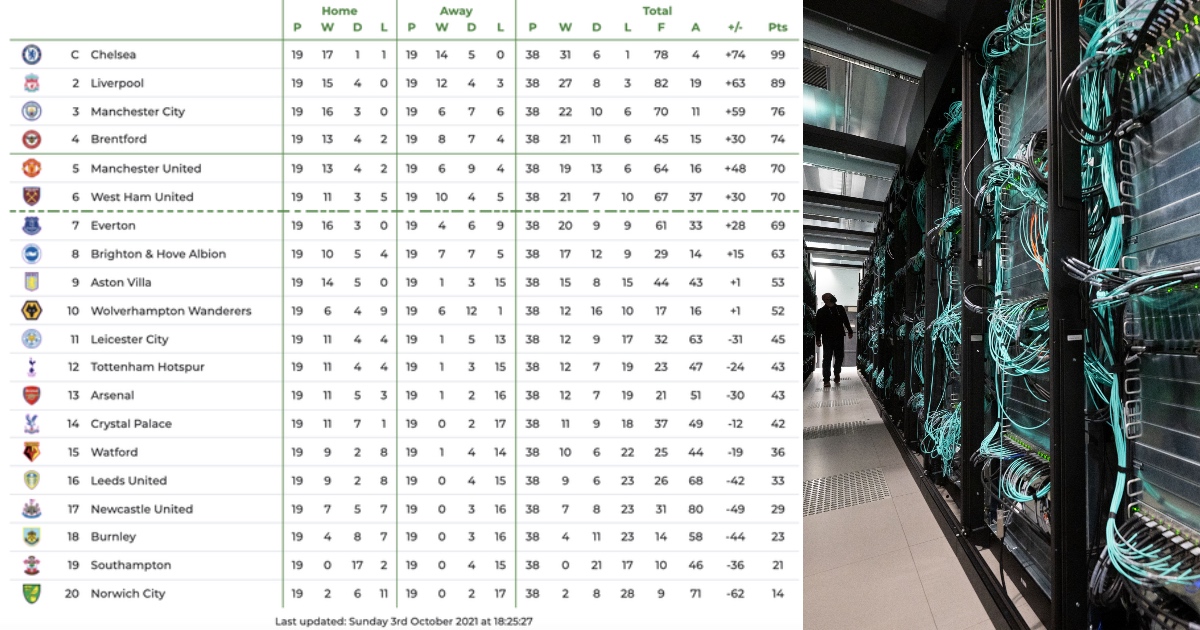 We’ve powered up the Macintosh 128k here at Football365 and after a few rounds of Shufflepuck, calculated that the predictions made by the infinitely more powerful Premier League ‘supercomputer’ are a load of horsesh*t.

So said Professor Ian McHale back in 2017, standing in the warehouse necessary to accommodate his monstrous machine in a short-sleeved Tesco white shirt, bow tie and glasses taped at the bridge.

Algorithms you say, Professor? Do go on.

The fact that the writer for inews then asks ‘still with us?’ is telling. In 2021, we’re not with you, we’re past you, unimpressed and off to FBRef.com to call out the nonsense. Failing that, we could simply glance at the finished Premier League prediction table, which must have been more than McHale or his ‘supercomputer’ predecessor had done, to call out said nonsense.

As Michael Scott once said: “Would you crunch those numbers again?”

Congratulations to Chelsea for conceding one more goal in 31 games, beating their previous Premier League record by 11. And the same acclaim must be bestowed on Manchester City and Brighton, who are also set to trump Jose Mourinho’s 2004-05 Blues. Oh and Brentford who, despite letting in 42 goals in the Championship last season, will equal the achievement of John Terry, Ricardo Carvalho et al. Pontus Jansson, you hero.

We must also reserve special praise for David Raya, who will at least match Petr Cech’s clean sheet record of 24, Ederson, who will beat it by at least five, and of course Edouard Mendy, who will definitely keep 34 clean sheets this season.

You’ve got to feel for Wolves fans, who will see a total of 22 more goals in their last 31 Premier League games. Even if we are to assume that all nine of their victories to come finish 1-0, at least 13 of their 16 draws will be 0-0 thrillers. Raul Jimenez alone scored the same number of goals (17) in his last full league season as Wolves will net overall in this campaign.

If we assume Leicester’s ten remaining wins are all to nil they are set to concede an average of 2.7 goals per game in 14 defeats and seven draws, and given they will only score a further 23 times, even if they fail to score more than one in any further game this season, they are set to draw a blank on eight occasions.

Well done to Everton and Aston Villa who will not lose a home game, and to Crystal Palace, who will not lose another. But it’s all about the creature comforts of Selhurst Park for Patrick Vieira’ side, who will pick up just one further point from their remaining 16 away fixtures.

Southampton aren’t going to win a game, earning all 21 of their points through draws – at least 12 of which will be goalless – smashing the previous draws record in the Premier League by four and the home record by a whopping seven.

Does this mean that we, mere mortals debunkers, have something the ‘supercomputer’ does not?

SAM, with a capacity to generate numbers greater than anything we could possibly have dreamed of in the mid to late 80s, using the power of a small nation to produce a table of football teams once every couple of years, that so desires to experience true human emotion, continues to fall at that last hurdle: common f***ing sense.