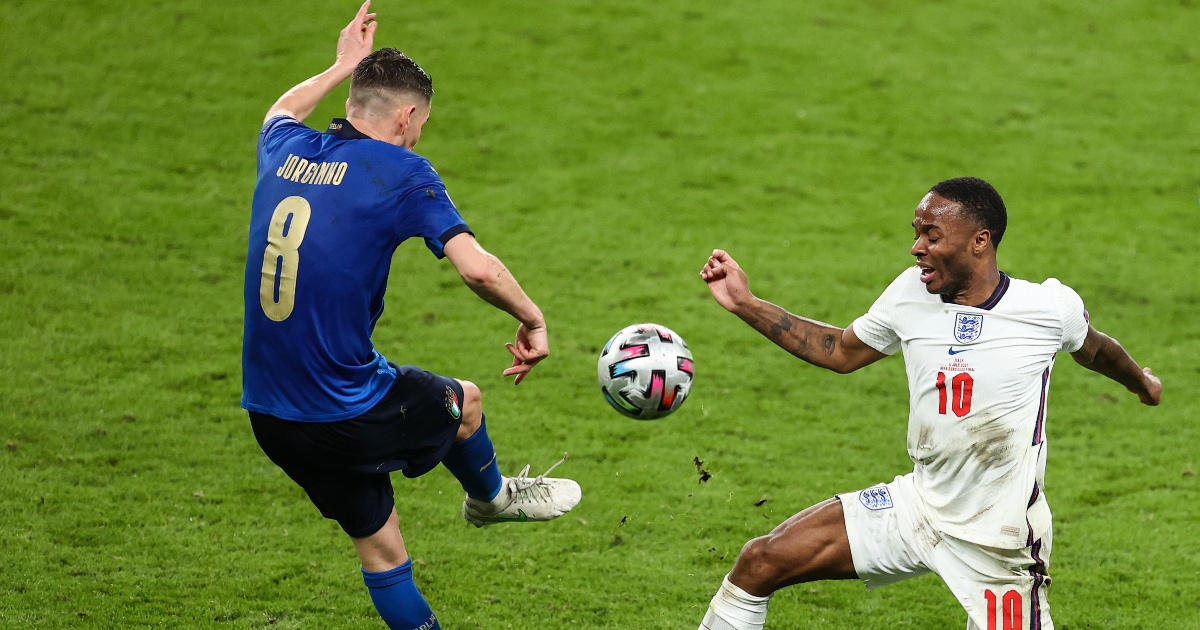 England lost to Italy but match the European champions for players in Football365’s XI of the tournament. Every cloud…

Goalkeeper: Gianluigi Donnarumma (Italy)
If we had been told ahead of Euro 2020 that a goalkeeper would win player of the tournament, we would not have been filled with great hope for the summer ahead. If we had been told that goalkeeper would be Donnarumma, perhaps even less so. But rather than the last line of an Italian team defending its way to glory, Donnarumma has been the safety net of the new Italy, still protected by outstanding centre-backs, but exposed at times by a delightful shift in footballing ethos.

Jordan Pickford was a hero for England on Sunday and throughout this tournament. He finished with the highest save percentage (88.3%), conceded just two goals and has undoubtedly benefited from a sports psychologist presumably telling him to chill his beans. But Donnarumma oozes the sort of cool no shrink could ever hope to engender and has somehow improved Italy despite replacing one of their all-time greats.

Right-back: Vladimir Coufal (Czech Republic)
What a year Coufal’s had. He played a huge part in West Ham’s outstanding Premier League season in his first campaign with the club and provided two assists to help Czech Republic to the quarter-final of the Euros. No right-back created more chances (7) and only three players – Jorginho (34), Giovanni Di Lorenzo (32) and Declan Rice (31) – made more tackles and interceptions than his 30.

Centre-back: Leonardo Bonucci (Italy)
“We heard it day in day out ever since Wednesday night since the Denmark game that the cup would be coming home to London,” said Bonucci after Italy beat England, becoming the umpteenth individual to neither hear nor understand the meaning of the song that broke his sleep and will now haunt us for the next 18 months.

Irksome though that is, he was a towering figure at the heart of the Italian defence, alongside fellow warrior Georgio Chiellini, and strikers of all other nations will be hoping against hope that they’ve now seen the back of the ageless duo.

Centre-back: Harry Maguire (England)
England have had far more highly rated centre-backs this century, but very few – if any – have been as consistently brilliant as Maguire. And while the likes of John Terry and Rio Ferdinand were generally better for club than country, the reverse is true of the Manchester United captain.

‘He’s never put a foot wrong’ can be interpreted as a backhanded compliment, so instead we’ll say he puts both feet right, all of the time, and his head on man or ball, whichever is closer. His defensive work is a given, but his passing was also excellent (save for ten minutes of the final when he lost his head), as was his leadership and attempts to drive England forward with the ball at his feet.

Left-back: Luke Shaw (England)
“I think he was good,” said the chief Shaw critic on Monday. Jose Mourinho, who – let’s face it – nearly f***ed the left-back’s career entirely, very nearly admitted he was wrong about something; that requires something pretty special.

And Shaw really was special in this tournament. He created the most chances for England with nine, only Steven Zuber (4) provided more assists than his three and he scored the only goal – a beautiful strike – that his country have managed in a major tournament final in 55 years.

Central midfielder: Jorginho (Italy)
We’ll have to wait a while longer for the Ballon d’Or to be announced and Lionel Messi probably has that sewn up having finally got his hands on an international trophy, but for Jorginho to even be in the running is remarkable. He probably should have been sent off in the final, may have faked an injury and definitely missed a penalty, but he has been the bedrock of this Italian side ever since Roberto Mancini took over and is rightly a hugely respected component.

Central midfielder: Pierre-Emile Hojbjerg (Denmark)
When he’s not absolutely knackered from constantly having to put out fires lit by the Tottenham pyromaniacs, Hojbjerg is a very good all-round midfielder.

He provided three assists, created the fifth most chances of anyone and the fourth most shot-creating actions.

Attacking midfielder: Pedri (Spain)
And here’s the man (boy) who tops the shot-creating action charts. Pedri was named the young player of the tournament having played all but two minutes for Spain. He absurdly combines never giving the ball away with creating lots of chances.

“What Pedri has done in this tournament, at 18, no one has done,” Luis Enrique said of the young genius. “Not even Andrés Iniesta did that; it’s incredible, unique.” He singlehandedly makes a bleak future bright for Spain.

Attacking midfielder: Emil Forsberg (Sweden)
Only Patrik Schick (+2.6) finished Euro 2020 with a better ‘goals minus expected goals’ score than Forsberg (+2.3). The RB Leipzig man carried his team to the last 16, scoring three of their four goals in the group stage, before a virtuoso display and another goal wasn’t enough to overcome Ukraine.

Attacking midfielder: Raheem Sterling (England)
He had a quieter game in the final but was by far and away England’s greatest attacking menace up to that point. Two of his three goals were winners for the Three Lions and his semi-final display was arguably the best of any player in a single game in the whole tournament – it was incredible.

Striker: Patrik Schick (Czech Republic)
He scored that ridiculous goal and other brilliant ones besides. He led the line superbly for Czech Republic and will be the subject of great Premier League transfer talk in the coming weeks.

He’s got a bit of everything and could be fantastic, but could also just have had one of those excellent major tournaments which persuades a club to part with money far above his worth to sign him. Bayer Leverkusen could easily be the real winners here.