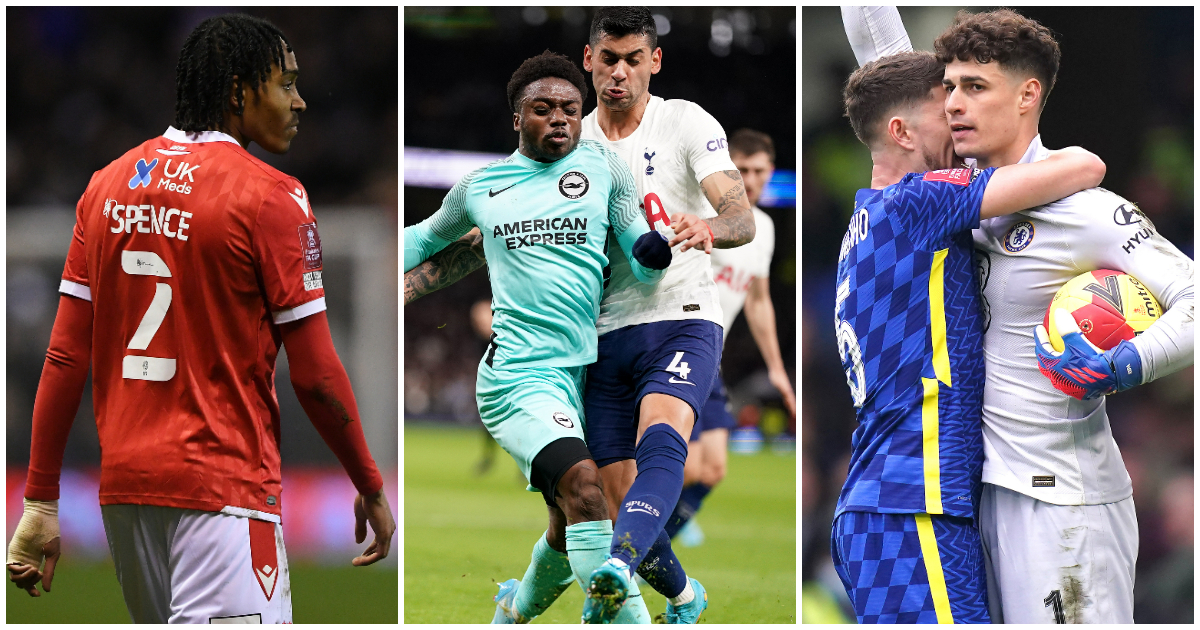 Liverpool’s Harvey Elliott enjoyed an FA Cup ‘fairytale’ while Cristian Romero was equally impressive on his own return from injury for Tottenham.

Harvey Elliott
The 18-year-old marked his return from a dislocated ankle with his first-ever Liverpool goal in front of the Kop. That’s nice, isn’t it?

It’s hard to imagine how things might have gone any better for Elliott since being left on the Elland Road turf with his foot not where it should have been. “He was unlucky with the injury but then lucky with the whole process afterwards,” Jurgen Klopp said after introducing the midfielder from the bench at the same time as new signing Luis Diaz for the last half hour of Sunday’s FA Cup win over Cardiff.

That victory was highlighted by Elliott’s finish, which capped a very bright performance from a youngster apparently eager to make up for lost time. In his absence, Liverpool still haven’t really solved their midfield problem, with neither Curtis Jones nor Naby Keita really seizing their opportunity against the Bluebirds.

“The injury is behind me and now I’m back!” Elliott said, which will be very handy for Klopp in the coming months.

Cristian Romero
Tottenham’s £42million summer signing also made his return to action this weekend and while his injury was not as serious as Elliott’s, he has been a bigger miss for Spurs.

Romero slotted straight into the middle of Antonio Conte’s back three and, late cramp aside, showed no signs whatsoever of any rustiness from a three-month lay-off.

It was handy for Conte that Romero was ready for the visit of Brighton what with Eric Dier missing due to a ‘small problem’. The absence of both could have been a big problem since Spurs have looked defensively sound with one or both in their side this season. With neither, they can be a mess.

A dominant performance on Romero’s return was one of a number of positives for Spurs as they sidestepped a potential banana skin with impressive ease.

Kepa Arrizabalaga
A day after Dean Henderson dived out of the way of 427 penalties at Old Trafford, Kepa showed the Manchester United stand-in how to save a spot-kick.

It’s lucky for Chelsea that the Spaniard did, otherwise they might have been staring at a hugely embarrassing cup exit. Plymouth pushed their Premier League rivals all the way and would have taken them into a shoot-out had Kepa not smothered Ryan Hardie’s effort deep into injury time, sparing Malang Sarr’s blushes.

Edouard Mendy’s AFCON-enforced absence has given the world’s most expensive goalkeeper an opportunity to stake a claim for the gloves on a regular basis and Kepa can be content with the case he has made. “It’s not only about the penalty save but it’s also about the performance, it was a very good performance,” said Chelsea coach Arno Michels, standing in for the ‘rona-struck Thomas Tuchel. “In the last matches, he’s been very reliable in his game.”

Kepa’s ‘ability to read minds’, as Michels put it, is one of the stopper’s assets but in this run of six games, he needed to prove some prolonged consistency rather than moments of inspiration when staring down an opponent from 12 yards. Job done, he might feel and he won’t relish returning to the bench now Mendy is on his way back.

Spence shot to prominence with a wonderful performance in the third-round win over Arsenal and the 21-year-old followed that with another marauding display and a goal against Leicester on Sunday.

So good was Spence against Arsenal that the Gunners reportedly considered buying him in January and the defender showed it was no flash in the pan by dominating the right flank against Brendan’s beleaguered Foxes.

So why did Boro let him go? “He needed to sort himself out, really,” explained ex-Boro boss Neil Warnock last month. “I basically said to him that you can go to the top or you can go to non-league.”

Warnock also said “Steve Cooper is the manager for him” because Spence is allowed to get forward more at Forest. If he maintains this form and focus, the top beckons.

Michael Olise
The Crystal Palace winger scored a goal and created another for the second FA Cup match in a row.

His left-footed free-kick was prodded home by Marc Guehi to ease any Palace nerves in the fourth minute before Olise pounded on a Hartlepool mistake to give the Eagles some breathing space.

Olise was at the heart of most of Palace’s best moments and Partick Vieira labelled the winger ‘a special player’ after the game. But the manager’s praise came with a warning.

“The more games he will play will help him to improve. There are still some tactical elements in the game that he needs to understand… he could have scored more today and made better decisions,” said Vieira.

But his performance will enhance Olise’s claim for more playing time in the Premier League to add to his four starts so far this season.