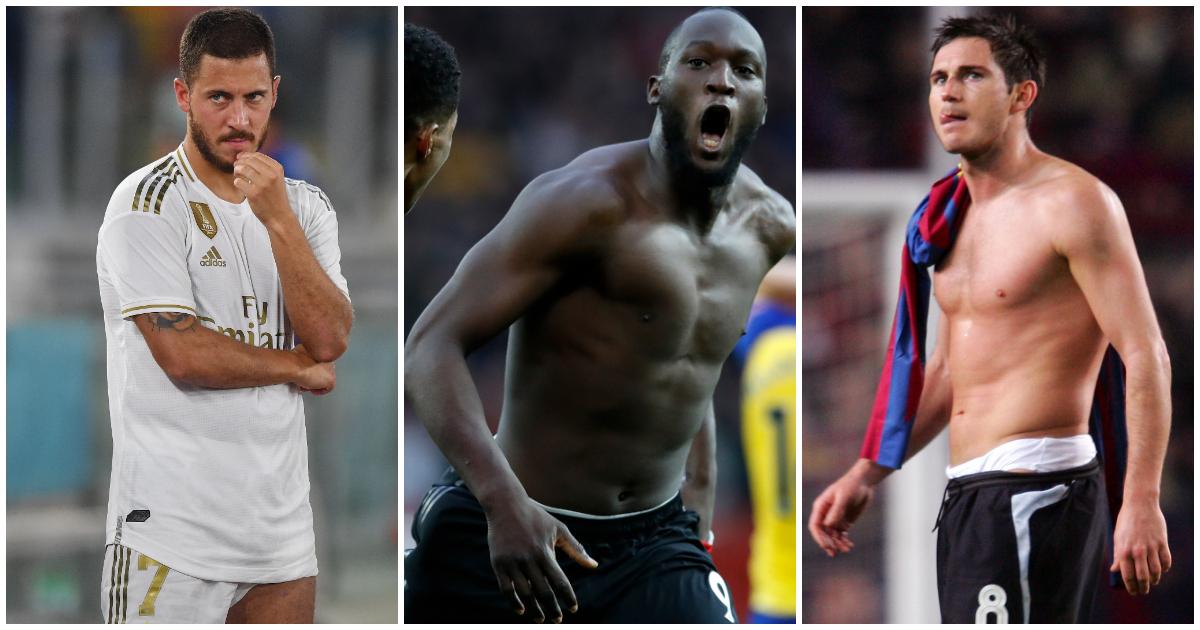 Romelu Lukaku has a couple of excuses, while Eden Hazard has no problem admitting he enjoys a holiday buffet. Regardless, we wish we were as ‘fat’ as these lads…

Frank Lampard
The Fat Frank moniker followed Lampard throughout his career after the physical specimens on the Upton Park terraces declared Neil Ruddock’s team-mate to be too portly.

It was just another stick with which to beat Lampard. The academy graduate wasn’t popular with some fans, who viewed his ascent to the first team as a consequence of having his uncle as manager and dad as assistant. When cries of nepotism grew old, they targeted his puppy fat.

Even when Lampard returned to Upton Park with Chelsea, the West Ham fans’ first wave of abuse generally centred around his non-existent gut. One instance, involving a female fan he identified as ‘massive’, stuck with Lampard as he recalled to the BBC in 2015.

“She was sitting there with a burger, calling me ‘you fat bastard’ and everything. I looked at her and thought, ‘My God, I am in trouble if I’ve got you telling me.’ That sort of broke the ice for me. I thought about what a load of rubbish this is and it never bothered me again.”

Romelu Lukaku
In 2018, there were times when watching Lukaku was akin to watching an oil rig attempt to trap a football. The then-Manchester United striker was bloody massive.

He wasn’t fat, but he was overweight. As Gary Neville pointed out when he left United for Inter Milan.

Andy he admitted he was overweight ! He is over 100kg! He’s a Manchester United player!

He will score goals and do well at Inter Milan but unprofessionalism is contagious 😷 ! 👋

Lukaku admitted he was too heavy. But not because he’d been on the chicken baltis. First it was because he bulked up too much for the 2018 World Cup. “In the Premier League, I cannot play with the same amount of muscle as international football,” he said five months after returning from Russia. “That was something that when I came back I knew straight away: ‘Nah, I cannot play in this style like this.’ I had to lose muscle basically. So you just stay out of the gym, drink a lot of water, and a lot of veg and fish and it helps.”

Then when he went to Inter and reported for duty 10 pounds overweight. Again, it wasn’t the stuffed crust meat feasts.

“Normally I have a fine digestive system,” Lukaku told ESPN. “I digest everything very quickly. That’s how it had been my entire life. But what the nutritionist said to me was, it had stopped working.”

Lukaku is actually so insecure man🤦🏾‍♂️ No-one is calling you fat you're just overweight af with all that muscle mass. You're a footballer not a bodybuilder ffs! pic.twitter.com/55mTOvs7Dg

Luke Shaw
In 2018, at the same time Lukaku was bench pressing Ford Mondeos, Shaw was copping flak for his figure too.

The United full-back was pictured in Ibiza looking like he was having a swell old summer. It was a familiar theme with Shaw, who had been publicly called out by Roy Hodgson, Louis van Gaal and Jose Mourinho for his fitness.

But within days of leaving the Balearics, Shaw shifted the timber.

Not that he will ever truly shed the tubby tag. Compared to most of the waifs in the Premier League, Shaw’s is a fuller figure. As he acknowledged to The Guardian: “People can say I’m fat but I know my own body. I always look big because I’m bigger built – I’ve got that Wayne Rooney type of body.”

It certainly hasn’t done him any harm.

Eden Hazard
The Real Madrid star is another, like Shaw, who enjoys a return trip to the buffet on holiday.

It never hampered Hazard at Chelsea, where his bulging backside was viewed as one of his strengths. But when he moved to Real Madrid and turned up nearly a stone overweight, it became an issue.

Not quick enough for Damien Duff.

Have we seen this before? 👀

Ilkay Gundogan
When it seemed that the Germany midfielder was heading for Manchester United, a couple of photos started doing the rounds which didn’t do the lad any favours.

Last time he was injured for the season this happened.. maybe we'll see the return of fat #Gundogan. pic.twitter.com/m5w7WQ9Rvd

Gundogan’s mitigation: a serious back injury – from which he feared he might never recover to play again – that kept him sidelined for over a year. Fair dos. If we were knacked for a year, we’d need to be winched off the sofa.

But even when he’s injury-free, Gundogan has to be careful and fight his natural urges, according to his personal chef.

“He’s a foodie, he loves eating,” Jonny Marsh told the Mirror. “He’s been brought up in that Turkish environment where everything’s about food.”