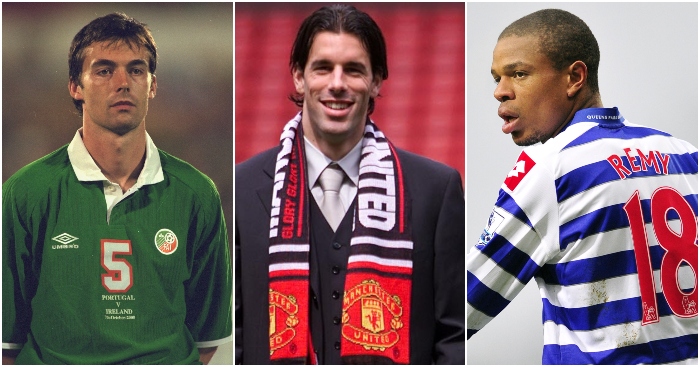 Leeds United are said to have ended their interest in Bayern Munich midfielder Michael Cuisance after the 21-year-old failed a medical, just like these lads…

The Holland centre-forward eventually got his big move in 2001 – a year later than planned.

In April 2000, Manchester United agreed an £18.5million deal with PSV Eindhoven for Van Nistelrooy, who travelled to England to drop his trousers and cough for the medics at Old Trafford. It was assumed to be a formality and United arranged a press conference to unveil their new star striker.

But the Red Devils were not satisfied with an injury Van Nistelrooy was carrying. They wanted the player to undergo tests on his medial ligament but neither Van Nistelrooy or PSV were willing to oblige. So United pulled the plug.

The following day, while training with PSV, Van Nistelrooy ruptured his cruciate ligament in the same knee.

He was ruled out for a year, but Sir Alex Ferguson was still determined to make Van Nistelrooy his centre-forward. Almost exactly a year after the original deal collapsed, United got their man and Van Nisterooy signed in a £19million deal. And he was bloody brilliant.

Liverpool were ready to give the No.7 shirt recently vacated by Luis Suarez to Remy in 2014 but the Reds eventually pulled out of an £8million deal with QPR.

The French striker had agreed personal terms of £90,000 a week and travelled to Boston where Brendan Rodgers’ side were on their pre-season tour. Remy was raring to go once his move was rubber-stamped. But Liverpool were dragging their feet. Initially they said the deal was being held up by administrative issues, two days before they walked away.

Liverpool never stated why but it was widely reported that they had concerns over the player’s heart. After consulting cardiologists, the Reds chose not to take the risk.

QPR boss Harry Redknapp couldn’t fathom the decision: “I don’t see how he could have failed a medical. He had a stringent one here, one at Marseille and at Newcastle and with France before the World Cup. You couldn’t meet a fitter lad.”

A month later, Chelsea paid £10.5million to sign Remy while Liverpool moved instead for Mario Balotelli. That went well.

Chelsea were less willing to take a chance on Arnautovic after they agreed to sign the Austria forward in 2009.

The Blues had arranged a £12million deal with FC Twente for a player dubbed ‘the new Zlatan Ibrahimovic’. But they refused to proceed with the transfer after they discovered a fracture in his foot.

The injury nearly scuppered a subsequent move to Inter Milan too. But after the Italians took a second look at Arnautovic, they agreed to take him on loan for the season.

They need not have bothered. Arnautovic managed only three substitute appearances in Inter’s Treble season before Twente sold him instead to Werder Bremen for around half the price Chelsea were prepared to pay a year previously.

Like everyone else in 2002, Inter Milan dreamed of a team of Gary Breens.

The Republic of Ireland defender was out of contract at Coventry and coming off the back of an impressive showing at the World Cup. Barcelona were said to be sniffing but Inter made a Breen an offer he couldn’t refuse.

However, an ‘idiot doctor’ ruined the centre-back’s dream move with a knee problem said to be to blame.

“Prior to the Spain game, I had a agreed a deal with Inter,” Breen told Off The Ball in 2017. “When we got back to Dublin, I flew out to Milan, I had the medical, failed the medical, and I still haven’t gotten over it.

“Essentially, the doctor was an idiot.

“When it didn’t materialise, I struggled actually for a little bit after that. I just couldn’t get it out of my head but you know, that’s life.”

The Wimbledon striker was set to join Rangers for £6.5million on a five-year contract worth £15,000 a week in 2000 and he was whisked up to Glasgow to sign at Ibrox on the same day as Ronald De Boer.

“I flew up with my dad in Sir David Murray’s private jet,” Hartson explained to Open Goal in 2018. “I arrived in Glasgow airport and it was like Michael Jackson was arriving. There was press everywhere.”

But Hartson never put pen to paper. Rangers told the Welshman that there was “something with your knee”, while Murray was prepared to be more forthright.

“His levels of fitness, our doctor told us, was a risk,” said Murray. “We did not feel that he had the correct fitness at the time to go straight into the Champions League.

“No disrespect, but to score against Huddersfield is slightly different to scoring against Galatasaray.”

Medicals scuppered subsequent moves to Spurs and Charlton too but Celtic were more willing to take a punt on Hartson the following year. “Look John, unless you’ve got a hole in your heart, I’m gonna sign you,” Martin O’Neill told the striker who then bagged 109 goals for the Bhoys.