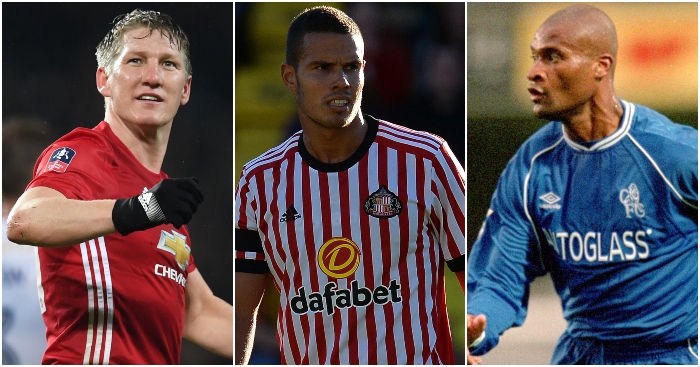 Mesut Ozil is spending his matchdays liking tweets bemoaning his current exile from Arsenal’s squad, all the while pocketing his £350,000-a-week salary. He’s hardly the first big name to become an outcast and while for some it was the end, others have shown that there can be a way back…

The Germany World Cup winger’s spell at Manchester United may have been disappointingly underwhelming but Schweinsteiger achieved one thing very few in football have managed before or since: he got Jose Mourinho to admit that he was wrong.

When Mourinho arrived at Old Trafford in 2016, Schweinsteiger had missed much of the previous season with injuries while his team-mates apparently didn’t appreciate what they perceived to be special treatment when Louis van Gaal allowed the veteran to undergo his recovery away from the club – much of it done on the WTA Tour.

Schweini was an easy target for Mourinho’s first show of force at United. The midfielder was told to stay away from Old Trafford while being omitted from the club’s Europa League squad and written off as an asset in the club’s published accounts. But rather than sulk, Scheweinsteiger kept his mouth shut, did as he was told and kept his head down, which in time led to a recall and prompted Mourinho to admit that he was wrong.

“We had a huge squad in the beginning but after knowing him as a person and a professional and the way he was respecting my decisions as a manager, yes I regret it and there is no problem for me to admit it, because I have told him,” said Mourinho after granting Schweinsteiger a free transfer to Chicago Fire as a gesture of appreciation to “a good guy, a good pro, a very good influence in training”

Like Mourinho, once you get on the wrong side of Roberto Mancini, there is rarely ever a route back. As former England left-back Bridge discovered at Manchester City…

Having not picked Bridge for a year, Mancini suggested at the end of 2011 that the ex-England left-back was spending his time playing golf. Bridge hit back by claiming that he doesn’t own a set of clubs while criticising the manager for giving him the silent treatment. “That is not true,” said Mancini. “I told Wayne two years ago that he was not part of our plans and if he wanted to find a good solution he should go somewhere else.”

An exasperated Mancini then told Bridge to “just f*** off” having presumably grown bored of trying, without success, to force the former Chelsea defender out of City, who were paying him £90,000 a week. Bridge eventually took that advice, but City still had to cough up for the player’s wages during loan spells at West Ham, Sunderland and Brighton until his contract ended in 2013, two years after his last appearance for the club.

The former England midfielder’s move to Manchester City was perhaps a mistake on his behalf but his £10million switch to Sunderland was a f***ing disaster for all involved.

Rodwell averaged 21 forgettable appearances over his first three seasons at the Stadium of Light during which time he went 1,370 days without winning a Premier League match that he started.

But it was when Sunderland dropped into the Football League that it really started to go wrong. Rodwell was the only squad member not to have a wage reduction written into his terms upon relegation and he continued to be paid £70,000 a week while the Black Cats while haemorrhaging cash. He was offered the chance to leave in January 2018 while his team-mates struggled in their fight to avoid relegation from the Championship but the midfielder opted to stay on Wearside – contractually, if not physically – and trouser his huge salary. As he was perfectly entitled to do.

“I’m sure we’ve gone down the legal route of that situation and we are stuck with a player that doesn’t want to play for Sunderland Football Club,” said then-boss Chris Coleman after relegation to League One was confirmed while Rodwell still had a year remaining on his deal. The former Everton youngster could have earned £43,000 a week while not playing in the third tier but he and Sunderland eventually reached a compromise to part company a year ahead of schedule. He had a spell at Blackburn before joining Sheffield United to sit on the sidelines there.

The former Ajax, AC Milan and Barcelona centre-back remains the poster boy for any player looking to earn a fortune for as little work as possible.

Bogarde, then 29, joined Chelsea on a four-year-deal in 2000 when he made 11 appearances in the first half of the 2000-01 season. But after featuring as a substitute on Boxing Day, he made only one other appearance in a blue shirt, off the bench in a League Cup tie against Gillingham almost two years later.

The Dutchman was pinned as a pariah by Chelsea fans and the media but he fulfilled his contractual duties – “I must be ready, at any moment, to play in the first team,” he said in 2004 – so it was fair that Chelsea met their obligations, which amounted to around £40,000 a week.

“This world is about money, so when you are offered those millions you take them,” he explained. “Few people will ever earn so many. I am one of the few fortunates who do. I may be one of the worst buys in the history of the Premiership but I don’t care.”

Andre Villas-Boas apparently did not learn his lessons from his miserable spell at Chelsea. There he tried to squeeze out Frank Lampard, Nicolas Anelka and Alex but his show of force was met with even greater resistance in the dressing room. At Tottenham, Villas-Boas targeted Adebayor…

The Togo striker had impressed on a season-long loan after joining in summer 2011, and had earned himself a permanent move a year later. He scored 22 goals in 58 games across those two seasons, the latter of which came under Villas-Boas.

But something changed in the summer of 2013. Gareth Bale was sold, Roberto Soldado was one of a number of arrivals, and Adebayor lost his place. Not only that – he was forced to train with the development squad. The striker did not play any of the first 11 games of the season. He was eventually recalled for a fixture against former side Manchester City. Spurs lost 6-0 and Villas-Boas shunted Adebayor back out into the cold.

The 32-year-old would stay there another four league games, the last of which was a 5-0 drubbing against Liverpool after which Villas-Boas was sacked. Adebayor’s patience was repaid by Tim Sherwood who took every opportunity to demonstrate that he does things differently to his predecessor. Adebayor was restored to the starting line-up for Spurs’ next game, where he scored twice against Southampton. Having missed 15 of the first 16 league games, Adebayor played 20 of the next 22, finding the net on 11 occasions.