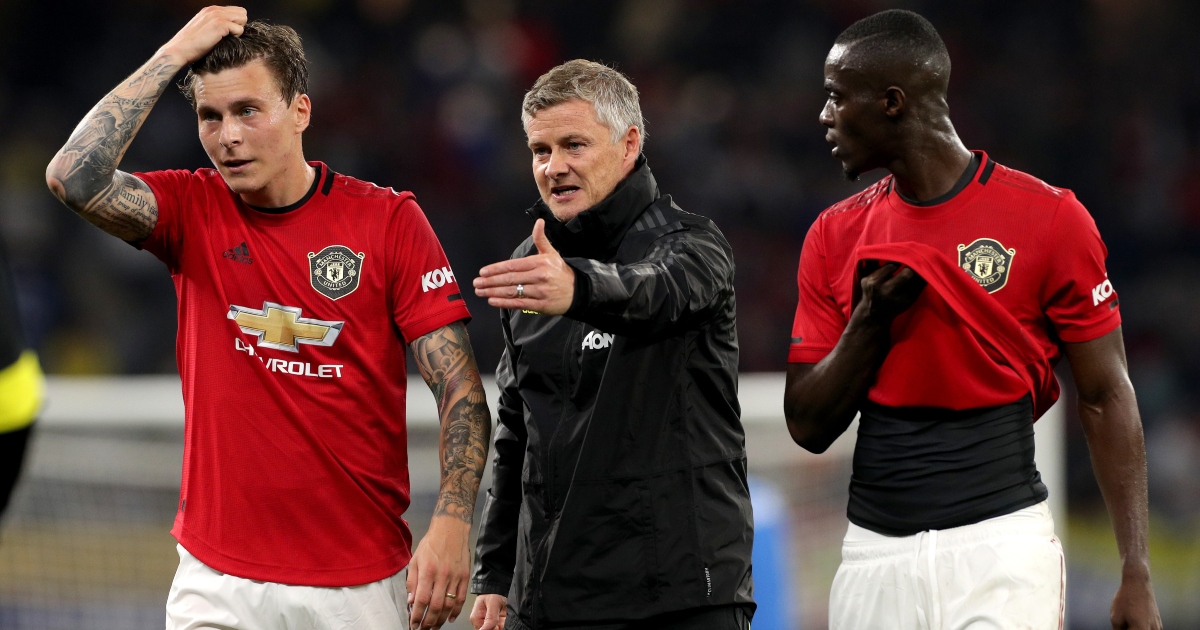 With Harry Maguire and Raphael Varane both sidelined through injury – the latter for a few weeks – Solskjaer looks like having to enter a crucial period in his Manchester United reign with Lindelof and Bailly as a centre-back pairing.

Despite the duo costing United £30million each – Bailly from Villarreal in 2016; Lindelof from Benfica a year later – rarely have they played together because of injuries or ropey form. Solskjaer spent £80million on Maguire in 2019 before signing Varane in the summer to finally give United a centre-back partnership they can rely on.

But not for this weekend and perhaps beyond. With a trip to Leicester coming up, we’ve taken a look back at the occasions Lindelof and Bailly have teamed up for United under Solskjaer. Only on five occasions have they been on the pitch together in the Premier League for longer than two-thirds of the game.

2018/19: Manchester United 4-1 Bournemouth (79 minutes)
Solskjaer paired Bailly and Lindelof together at the heart of his defence for his third game in charge of United. A cavalier first-half display saw United go 3-0 up before Paul Pogba added a fourth in the second period to put United in cruise control.

Then Suicide Eric earned himself a straight red card for hacking down Ryan Fraser on the halfway line.

“I mean, what’s he thinking?” said Jamie Carragher, echoing the sentiment of every United fan both amused and bemused by the maddening Ivorian.

“They’re winning 4-1, it’s on the halfway line and he’s flying in with a scissors challenge. Absolutely brainless that from Bailly.”

2018/19: Leicester 0-1 Manchester United (90 minutes)
After Bailly served his three-match ban, he was back alongside Lindelof for the 2019 trip to Leicester who fielded a centre-back pairing of Maguire and former United defender Jonny Evans.

But it was United who kept the clean sheet, the only one Lindelof and Bailly have achieved together.

And it was hard-earned. Leicester had 17 attempts on goal compared to United’s 10 but the Red Devils held firm, with Bailly blocking one shot from Demarai Gray with his face.

2018/19: Manchester United 1-1 Chelsea (71 minutes)
David De Gea’s howler kept the spotlight off his defenders, with the United keeper making another horrible gaffe to gift Chelsea an equaliser before half-time.

Chelsea again dominated the shot count – 16 to seven – but Bailly and Lindelof held firm-ish. Until Bailly suffered another injury.

His game was up midway through the second half when he sustained a season-ending knee problem. He was replaced by Marcos Rojo, who brought his customary chaos by lunging in on Willian a few moments after coming on, somehow escaping a straight red card.

2020/21: Leicester 2-2 Manchester United (66 minutes)
By now, Maguire had been signed so that United fans no longer had to fret over a defence with Lindelof or Bailly at the heart of it.

Bailly partnered Maguire, with Lindelof filling in at right-back at the King Power. United took the lead twice, but poor defending allowed Leicester to capitalise on the visitors’ wastefulness in front of goal.

For the first leveller, Bailly and Scott McTominay both failed to close down Harvey Barnes, with Bailly getting his angles wrong. Then, late on, Bailly completely lost track of Vardy, whose finish found the net via a deflection off Axel Tuanzebe, a substitute for the injured Lindelof.

2020/21: Manchester United 2-4 Liverpool (86 minutes)
Maguire’s injury two games previously ended his ever-present record, meaning Solskjaer had to pair Lindelof and Bailly together at centre-back against Liverpool – something he may have to do again next week.

If last season’s mess is anything to go by, then you can expect Solskjaer to be leaning on Maguire to make himself available when Mo Salah and his pals pull up to Old Trafford next Sunday.

VAR bailed out Bailly when he was adjudged to have clattered Nat Phillips in the box in the first half after he made a mess of defending a corner. United did the same again but this time there was no reprieve when Phillips was allowed to dribble across a packed box to shoot and set up Diogo Jota.

Their set-piece frailty cost them again when Roberto Firmino headed in a free-kick at the far post, though Paul Pogba was to blame for losing his man.

The defending for Liverpool’s third, which started with a United goal-kick, really has to be seen to be believed.