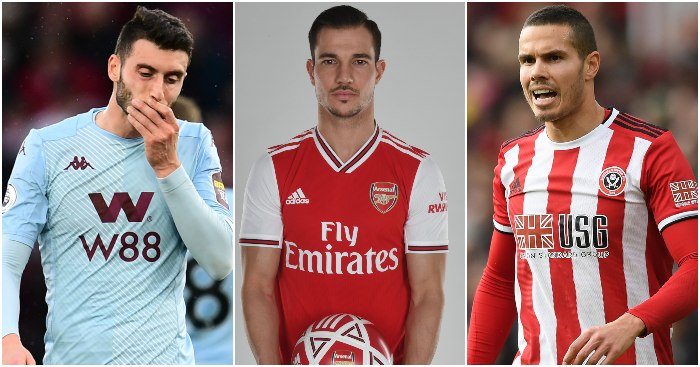 Jack Rodwell (Sheffield United)
“He plays a number of positions and hopefully we can get him going,” said Chris Wilder while attempting to kick-start Rodwell’s career. The former England midfielder, 29 next month, has endured a spectacular fall from grace, his free-fall commencing with a 26-game spell at Man City before becoming the poster boy for Sunderland’s decline.

After eventually cutting ties with the Black Cats, Rodwell played 22 games for Blackburn in the Championship last season, which were enough for Roma to offer the former Everton schoolboy a trial. Nothing came of that, leaving Rodwell without a club for the first half of the season.

But Wilder took the three-cap international under his wing at the end of last year and offered him a deal in January until the end of the season, with the option of an extension. But so far, Rodwell has managed only 58 minutes in a ropey FA Cup performance against non-league AFC Fylde.

They've kept quiet up until now, but they've just got news Jack Rodwell has signed for Sheffield United and felt they had to say something. https://t.co/s9Pvw9fj8j

Ryan Bennett (Leicester City)
The Wolves defender’s loan move to Leicester on deadline day caught many by surprise but so far we have yet to get a glimpse of Bennett in a blue shirt.

In fairness, last weekend was the centre-back’s first opportunity, since the Foxes went on their winter break straight after the draw with Chelsea which came less than 24 hours before Bennett signed. Then he was ineligible to face his parent club last week before finally being clear to feature against Manchester City on Saturday.

But Brendan Rodgers opted to keep Bennett in the stands. Despite playing a back three – something Rodgers is unlikely to do often during the run-in – the Foxes boss kept faith with Christian Fuchs alongside Jonny Evans and Caglar Soyuncu, with Wes Morgan being picked as bench cover.

“We had three centre-halves playing and we had Wes on the bench, so I didn’t need another one,” explained Rodgers. Leicester will have to pay £5million to sign Bennett permanently should he make a certain number of appearances, but that appears unlikely at this early stage.

Cedric Soares (Arsenal)
The Portuguese right-back gave himself the best chance of following in the underwhelming footsteps of previous Arsenal January arrivals, like Kim Kallstrom and Denis Suarez, by limping in to sign his contract with the Gunners.

Soares had his knee in a brace when he penned a deal until the end of the season, when he becomes a free agent. The impending expiry of his terms at St Mary’s coupled with his injury meant Southampton were most surprised when they received a bid of £5million just before deadline day. But, Arsenal…

By the time Soares, who spent the second half of last season on loan at Inter Milan (where he made just four Serie A appearances) is ready to make himself available, he will have missed at least a month of the three and a half he signed up for.

🗣"He is out of contract in the summer & he is injured" pic.twitter.com/0j7psx81OV

Valentino Lazarro (Newcastle United)
The Inter Milan wing-back has had an eventful few weeks since joining Newcastle until the end of the season. He gave a decent account of himself during the first half of his first start against Arsenal last week – before being at fault for the Gunners’ opening two goals. “It was a horror showing,” said Phil Thompson.

Lazarro fared little better upon his and Newcastle’s swift return to the capital on Saturday. The 23-year-old was dismissed after denying Wilfried Zaha a clear run on the Magpies goal, meaning the Austria international will now sit out next weekend’s clash with Burnley.

Coming so late, Steve Bruce felt the official could have spared Lazarro and the Toon boss was happy with his loan signing – but his new team-mates don’t appear too willing to give him the ball. “We ignored him so much in the final third when he was in good positions,” bemoaned Bruce after a damaging defeat. Lazarro has a couple of weeks in training to convince the other Newcastle players that he can be trusted.

Valentino Lazaro subbed off by Newcastle. He was megged by Saka for Arsenal's second and lost out to Aubameyang for Arsenal's first. Maybe #USMNT man DeAndre Yedlin will be back in for Newcastle at right back next week?

Borja Baston (Aston Villa)
The signing of Danny Drinkwater looked pointless when he was given an hour-long runaround on his Villa debut against Manchester City, but at least the former England midfielder is getting game time. Baston has had to make do with a couple of cameo appearances as a substitute in appearances totalling 16 minutes.

The Swansea striker was signed to beef up Smith’s attacking ranks, which have been decimated by injuries to Wesley and Keinan Davis. The Villa boss was very open about his desire to sign a couple of forwards for the second half of the season – shifting the emphasis on to Suso and his superiors – and though Mbwana Samatta was recruited with 11 days to go, Baston was unveiled only ten minutes before the deadline, which indicates where he may have been on their list of potential targets.

“We’ve brought in Borja who, for me, will be someone who’s really hungry who’ll want to go and prove himself,” explained Smith, though the Spaniard will need rather more action to be able to do that. To tart himself up for potential suitors this summer, he’ll need to get more involved than the nine touches he has managed so far in a Villa shirt.