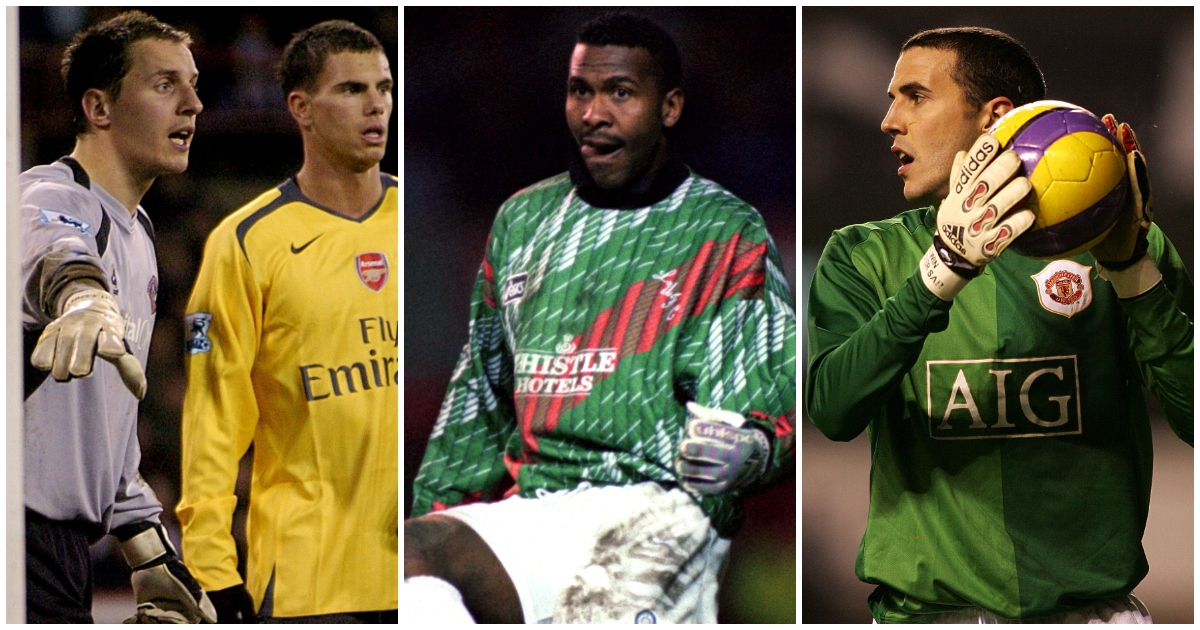 Vinnie Jones – for Wimbledon at Newcastle, October 1995
Dunk isn’t the first novice goalie to go in the sticks against Newcastle. And Vinnie had to do it for more than half an hour. When Newcastle were good…

The Magpies were already 3-1 up at St James’ Park in October 1995 when Wimbledon stopper Paul Heald received his marching orders for two yellow cards, the second of which was for a late tackle by the corner flag. Which makes you wonder if he just wanted first dibs on the hot water in the showers.

With no substitute keeper, Jones grabbed the Sondicos – and the midfielder made a decent fist of it while keeping the Gallowgate entertained…

Lucas Radebe – for Leeds versus Man Utd, April 1996
The Chief took Mark Beeney’s mitts when the Leeds keeper was dismissed for handling the ball outside his box at Old Trafford.

Radebe, who began the game on the bench, faced a title-chasing Manchester United side for 72 minutes and he came close to keeping them out. The centre-back made saves to deny Ryan Giggs, Bryan McClair and Andy Cole but his resistance was eventually broken by Roy Keane’s 73rd-minute drive.

Our friend and yours, Rob Conlon, went forensic on Radebe’s stint in the sticks.

Lucas Radebe gained instant cult status when he went between the sticks against Man Utd for @LUFC #PLMoment pic.twitter.com/FMyuVO7PbR

Phil Jagielka – for Sheffield United versus Arsenal, December 2006
“I never bothered with a sub goalkeeper,” said Neil Warnock reflecting on the time he actually needed one. “I thought an extra striker was more important.” And Paddy Kenny was a robust sort. Until a wet and windy evening just before Christmas in 2006…

Kenny pulled up lame after taking a goal-kick around the hour mark. The Blades were already 1-0 up thanks to Christian Nade (remember him? Nope, us neither) and United were defending for their lives. Which they continued to do after Jagielka had borrowed Kenny’s XL jersey.

Despite all that surplus polyester flapping in the wind, Jagielka kept his sheet clean and his knees too. Arsenal only really tested him once in half an hour…

John O’Shea – for Man Utd versus Tottenham, February 2007
United were already 4-0 up at White Hart Lane when Edwin van der Sar knocked off five minutes early (with a broken nose, admittedly), so O’Shea could have a little more fun than the likes of Jagielka and Radebe during his cameo in nets.

It was originally going to be Rio Ferdinand who took over from O’Shea and the England defender tried to stitch up his team-mate with a back pass so short it must have been intentional.

With Robbie Keane baring down on goal, O’Shea saw no need for the use of his hands and rushed from his box to execute a perfectly-timed tackle on the Spurs striker, much to Wayne Rooney’s amusement.

12 years ago today, John O'Shea made a memorable appearance as a goalkeeper for Manchester United at White Hart Lane 🙌

Niall Quinn – for Man City versus Derby, April 1991
Okay, we’re cheating a little here because Quinn’s first go in goal (he played in nets for Sunderland too) came a year before the Premier League, and football, was invented. But the then-City striker’s heroics are well worth bending the rules for…

Quinn put City ahead against a Derby side who needed to win to stave off relegation, but the Rams were given a lifeline when Tony Coton brought down Dean Saunders.

After they had been thrown at ref Ken Lupton, Coton’s gloves with picked up by Quinn in time for Saunders penalty. If it wasn’t already obvious, Derby must have known they were destined for the drop when Quinn sprang to his left to keep out Saunders’ spot-kick…

Only one solution to Manchester City's potential goalkeeping crisis, and that is Big Niall John Quinn pic.twitter.com/Wni4fIhk4i