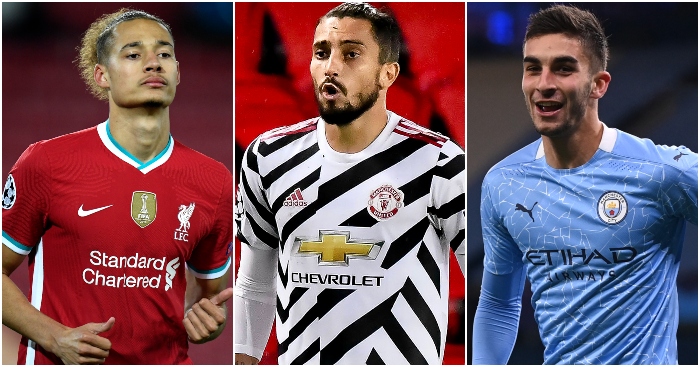 The packed schedule has seen numerous players succumb to injury as the games come thick and fast. For some, like Joe Gomez, it sucks. For others, it’s an opportunity they have been waiting for…

After a torrid opening couple of weeks, Luke Shaw had rediscovered some form by last week. After just three assists all last season, the Manchester United left-back chucked in two in four days. But amid the exertions that Ole Gunnar Solskjaer was so furious about, Shaw’s hamstring went ‘twang’.

So it’s fortunate that United followed Shaw’s advice in the summer to buy some new players – Telles being one of them. So far the Brazil full-back has offered only 66 tantalising minutes in a United shirt when he played as a wing-back in the Champions League win over PSG. Then he caught the ‘rona and he was reduced to wearing his new kit on his new sofa.

But Telles’s recovery is perfectly timed with Shaw sidelined for around a month. If Solskjaer hasn’t yet given up on playing a diamond midfield – he really should have – then Telles can certainly offer more than any of United’s other full-backs in an attacking sense. But the same applies in a 4-2-3-1, especially while Marcus Rashford drifts inside.

Once again, injury has come at a most inopportune time for Shaw. But for Telles, he has a month during which United play six games to make himself indispensable to Solskjaer before Shaw eyes a return for the derby on December 12, when both could feature in a back five.

With Liverpool losing centre-backs by the score, both Williams and Nathaniel Phillips have an opportunity to demonstrate that they are capable of making the step-up to first-team football before Jurgen Klopp gets the chance to recruit a defender in January.

Phillips and Williams have both featured in recent weeks, with the former facing West Ham and the latter making his Champions League debut a few days later. Phillips is the more senior of the two – he’s actually a couple of months older than the cursed Joe Gomez – and Klopp was certainly impressed after he won more aerial duels than any other player in the win over the Hammers.

“He’s a brilliant guy, a smart guy, intelligent, everything. He’s not easy on the eye, he’s not Messi, but who cares?! In the air he’s a monster.”

Phillips, though, isn’t the quickest, which is where Williams has the edge. The 19-year-old replaced Fabinho against Midtjylland and played an hour before being handed a Champions League start at Atalanta, when Klopp was again drooling over his options.

“Exceptional. I cannot imagine being 19 and playing in the Champions League against Zapata, it’s incredible. I couldn’t be more happy for Rhys.”

It seems likely that both Williams and Phillips will get more opportunities in the coming weeks with Liverpool facing 11 games between now and the opening of the January window. For Williams, he might never get a better opportunity to “become an irreplaceable piece of this side”.

With both Sergio Aguero and Gabriel Jesus borked, Pep Guardiola was left scratching around for a centre-forward. He found one in his new winger…

Torres was viewed as a bargain when City signed the 20-year-old from Valencia for just over £20million. It was expected that he would be eased into the City team but injuries have seen Guardiola turn to Torres more often than he might have liked, in a position he might not have expected.

Torres has been able to show in four games that he can operate as a central striker in addition to his natural position on the right flank. He has three goals in three Champions League matches and he led the line superbly against Sheffield United before Jesus returned from the physio’s room in time for the visit of Liverpool last weekend.

Torres was shuffled back to the wing against Liverpool but that was a show of faith from Guardiola, who felt able to leave Riyad Mahrez out of his matchday squad, with Bernardo Silva and Phil Foden chosen as bench back-up for the new boy.

Brendan Rodgers didn’t actually break into rap while lauding Mendy’s performances last week, but you can tell he wanted to…

“He’s really showing the quality player he is. I have been delighted with Papy. He gives the team stability with his experience and understanding of football and how we work. He has been crucial to how we play.”

Mendy hasn’t had many a consistent run in the Leicester side to showcase his ability but the £13million signing from Nice in 2016 has started all eight games this season, covering for Wilfried Ndidi while the Nigerian initially played at centre-back amid a defensive injury crisis before he was struck down with an abductor problem.

Mendy needs to make the most of Ndidi’s absence because Rodgers has already warned that the two aren’t likely to play together in the same midfield.

“Before he’s played with Wilf, who’s something similar beside him and it’s probably where both those players need someone creative beside them.”

If he’s trying to make himself undroppable, Mendy is going about it in the right way.

“We are more than only Danny Ings,” said Ralph Hasenhuttl after his leading striker suffered a knee injury. Southampton’s other strikers have up to six weeks to prove the manager right.

Che Adams will have to step up to the role of leading man in Ings’ absence and the striker who struggled desperately at times in his first year in the Premier League is making a decent fist of his second. Alongside Adams is where Hasenhuttl has a decision to make, and Walcott appears to have been given the chance to make the second central striker’s role his own.

He moved from the left to play closer to Adams in last Friday’s 2-0 win over Newcastle – his second home debut for Saints – and his performance – which included an assist for Adams’ opener – suggests he will keep the job after the international break after playing in three different positions in three games.

“I enjoy playing up front,” said Walcott while admitting he ‘feels like a kid again’ to be back at Sy Mary’s. “The last time I played up front in a two might have been with Ricardo Fuller or Kenwyne Jones.”

That was during Walcott’s first spell at Southampton as a teenager. Fifteen years on, Ings’ injury gives the former England forward the chance to make his mark in Hasenhuttl’s attack.