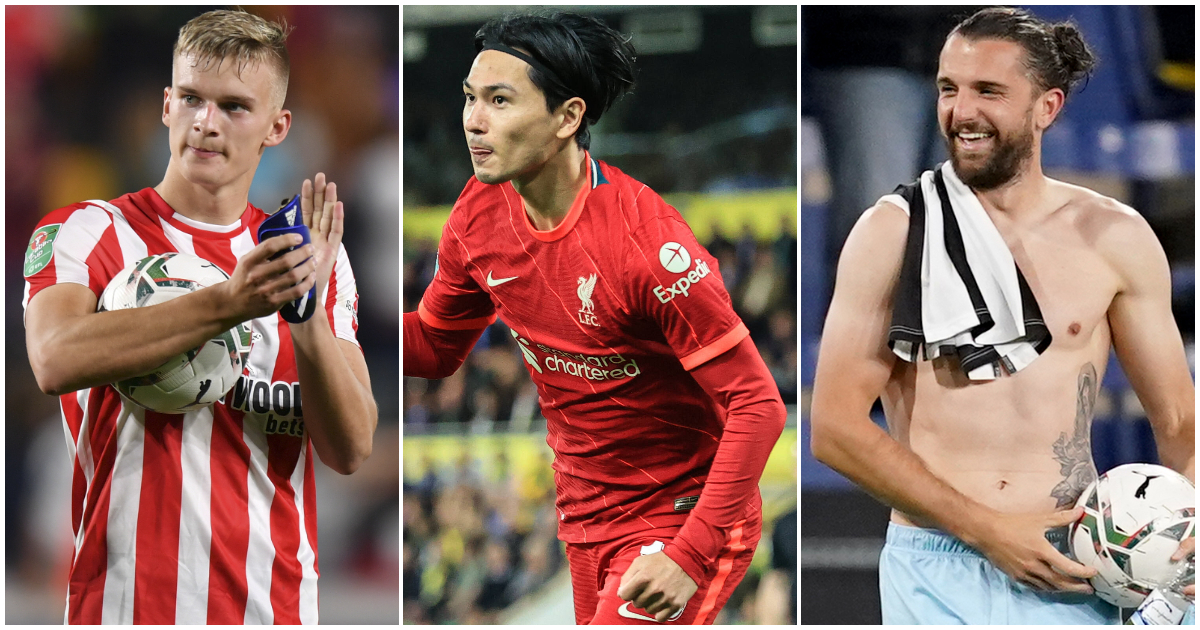 The Carabao Cup gave plenty of Premier League fringe players the chance to enhance their prospects. Here are five who seized that opportunity on Tuesday night…

Takumi Minamino
There were plenty in Liverpool red at Carrow Road who furthered their first-team chances in the 3-0 win Carrow Road. Kaide Gordon showed he is ready for senior football on his debut; Divock Origi did a goal; Naby Keita followed his stunning strike on Saturday with a dominant 45 minutes; Caoimhin Kelleher cemented his position as Alisson’s back-up with a solid display and a penalty save.

But Minamino’s brace was the most eye-catching contribution of the evening. The Japan international demonstrated his versatility by thriving off the left flank and in midfield, while showcasing his technical quality with two wonderfully taken goals.

Minamino is returning from a thigh injury sustained on international duty and needed to impress upon Klopp that he can contribute to his first XI, something that was not lost on the manager.

Jay Rodriguez
If the Burnley forward was playing for a place in Sean Dyche’s XI this weekend, four goals ought to do it.

Rodriguez netted a 12-minute hat-trick before later adding a fourth at Turf Moor after Rochdale had take a surprise lead. It means the 32-year-old has now scored more goals than the rest of the Burnley squad combined this season.

Dyche certainly has a decision to make before Saturday’s trip to Leicester. Burnley have been pretty hopeless going forward this term and those attacking struggles have left them winless after five matches. Chris Wood is certain to keep his place but Ashley Barnes has not had a good start to the season. Rodriguez surely deserves a chance to start for the first time in the Premier League since the opening day of the season.

Marcus Forss
The Brentford striker had a hat-trick before Rodriguez bagged his first and Forss helped himself to a fourth too while the Bees picked the bones out of the Oldham carcass.

It was the striker’s first appearance since the second-round win over Forest Green and Forss did his prospects no harm whatsoever.

Unlike Rodriguez, Forss has little prospect of a Premier League start this weekend, but the Finn at least demonstrated to Thomas Frank that he is ready to deputise should Brentford suffer any injuries to their first-choice strikers.

Cole Palmer
Pep Guardiola rang the changes for Manchester City’s clash with Wycombe by selecting a team of two halves. The back four was made up entirely of academy players, with their shirt numbers adding up to 326. No.90, Romeo Lavia, also featured in midfield, but ahead of those youngsters were more familiar names like Kevin De Bruyne, Phil Foden, Riyad Mahrez, Ferran Torres and Raheem Sterling.

Palmer, though, did his best to wrestle headlines away from Phil Foden after scoring his first professional goal to complete a 6-1 rout. Coming on the back of his Premier League debut against Norwich and his strike for England Under-21s, it rounded off a superb few weeks for the 19-year-old.

Guardiola has already spoken gushingly over Palmer: “He will be an exceptional player. He’s an incredible young lad. He is a guy who finishes incredibly like Foden.”

The turn and the finish 👌

A superb goal from Cole Palmer to help our #YoungLions to victory against Kosovo! pic.twitter.com/YYNKkVIWBU

Ibrahima Diallo
The Southampton midfielder did his prospects of a first Premier League start of the season no harm whatsoever with his first career goal in the draw and subsequent shootout win at Sheffield United.

Diallo had featured in all of Saints’ league games before the draw with City on Saturday but only as a substitute. At Bramall Lane, the 22-year-old was in from the start and his goal was just reward for an all-round positive display in the heart of Ralph Hasenhuttl’s midfield.

The £12million signing from Brest last October was an infrequent presence in Saints engine room last season but this performance can only impress upon Hassenhuttl that Diallo is ready for more responsibility after almost a year at St Mary’s.