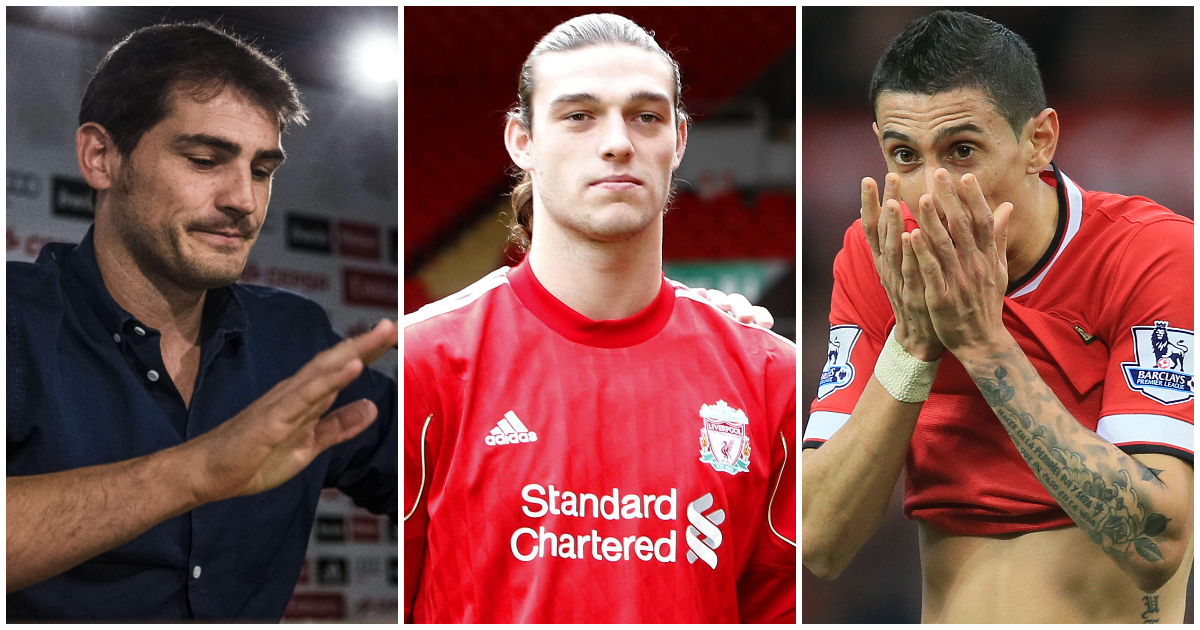 One of these players staged a tearful goodbye like Lionel Messi. Another hoped he’d fail his Liverpool medical…

Alex Song
Not so long ago, before they were on the bones of their arse, Barcelona were the biggest pull in world football. Though not for Alex Song…

The midfielder moved to Barca from Arsenal for £15million in 2012. Though at the time, he would have preferred to stay in north London.

“I love Arsenal, I never wanted to leave,” Song said after moving to the Nou Camp.

“I was ready to commit my future to the club. All I wanted were talks about a new contract but each time we were due to sit down, the club postponed it. I was fobbed off. I wanted a new five-year contract at Arsenal. In the end I got one – at Barcelona.”

“Everyone knew Robin was leaving,” Sagna said at the time. “But Alex? He’s 24. He had three years on contract. I still don’t understand. He’s a huge loss. When your two best players go, you ask questions.”

Song later admitted that there was a financial incentive to leaving Arsenal, having struggled on £15,000 a week, the poor lamb.

“When Barcelona offered me a contract and I saw how much I would earn, I didn’t think twice. I felt my wife and children should have comfortable lives once my career is over,” he added.

“I met Barca’s sporting director, and he told me I would not get to play many games. But I didn’t give a f*** – I knew that now I would become a millionaire.”

Andy Carroll
It was clear from Song’s performances at Barca that his heart wasn’t in it, and you might reasonably draw a similar conclusion from Carroll’s time at Liverpool.

The Reds made Carroll their record signing on deadline day in January 2011, paying £35million for the Newcastle centre-forward. But Carroll made clear at the time that he did not want to leave his hometown club.

The striker was in talks over a new contract at Newcastle which were abruptly halted when it became obvious to Mike Ashley that he could make a patsy of Liverpool while they desperately sought a replacement for Fernando Torres with £50million burning a hole in their pocket.

“The owner made it clear to me that I was not wanted at the club, saying that his own helicopter is waiting for me to go down at talk to Liverpool,” Carroll told the Evening Chronicle.

“Derek Llambias asked me to hand in a transfer request, so I was pushed into a corner and had no choice. I wasn’t wanted by them and they made it clear they wanted the money.

“Then I flew down. I didn’t want to leave. I’m gutted that I wasn’t wanted at my home team after everything I have done and the progress I have made.

Carroll elaborated on his feelings years later after returning to Newcastle, via a stint at West Ham.

“I was injured at the time and all I was thinking was, ‘please, just fail the medical’,” he told the Daily Mail.

“I remember leaving Newcastle’s training ground in Kevin Nolan’s car because loads of people were outside. We went to his house and watched it on TV. I was like, ‘I’m not going’. I’d just bought a house, and a cat the day before!“

Angel Di Maria
Di Maria barely bothered to hide the fact he didn’t want to be at Manchester United. He spent a year in England with a face like a slapped arse…

Perhaps the Red Devils should have looked for the receipt on their £59.7million record signing when they read his open letter to Real Madrid fans, published the day after he completed his move to Old Trafford.

“My time at Real Madrid has come to an end. It’s impossible, in just a few lines, to put all I have gained here, but this letter is my way of explaining how I’m feeling now that I’m bidding the club farewell.

“Over the four years I have had the honour of wearing this shirt, I have felt nothing but pride about everything that has happened and all I have achieved together with my team-mates.

“Sadly, now I have to go, but I want to make it clear that this was never my wish. I’ve always wanted to progress, as anyone else does in their job. I went to the World Cup after winning the ‘Decima’ with the hope of getting some signal from the club management, but it never came.

“Many things were said and many lies circulated. They always wanted to pin the idea of leaving the club on me, but that’s not how it was. Unfortunately, my football isn’t to someone’s taste. The only thing I asked for was a fair deal.

“There are many things that I value and a lot of them have nothing to do with my salary. I hope to find them at Manchester United.

“I hope that Real Madrid have a great season and achieve the ambitions the club is always keen to push for. That moment at the Bernabéu in the Supercopa when I came onto the pitch and was greeted with such great affection from the crowd will stay with me forever. Thank you so much. It still gives me goosebumps. I could not think of a better farewell for what turned out to, unfortunately, be my last game.”

Di Maria stunk out Old Trafford and although a robbery at his home hardly helped him to settle, his wife probably didn’t help. She hated it even more than he did.

Iker Casillas
Real pushed out Casillas too. At least, that’s what the Casillas clan claims…

The legendary goalkeeper, like Messi, broke down in tears at his farewell press conference, one that lasted a total of nine minutes which he was made to endure alone. After 725 games in Real’s goal having won everything there is to win, no one from the club bothered to show.

Not least Florentino Perez, who Casillas’s parents blamed for their son’s premature exit, even after a quarter of a century. The president’s problem, according to Ma and Pa Casillas: their son was not one of his signings and he was ‘too short’.

“The campaign to tarnish Iker has been orchestrated by Florentino for many years,” Casillas’s mother told El Mundo. “They have vilified him,” added his old man. “It has been an attempt to hunt him and destroy him.”

The leaked recordings of Perez which emerged earlier this year certainly back up the view that the president didn’t fancy Casillas much.

On the tapes, from 2006, Perez says: “He’s not a Real Madrid goalkeeper, what can I say? He has been our biggest mistake. The problem is everyone loves him, I don’t know. He has so many people on his side. But anyway, he is one of the biggest scams. The second is Raul. The two big scams at Madrid are Casillas and Raul.”

Pepe Reina
“Although it was not my decision to leave, I will accept it just like I have always accepted any decision that Liverpool have taken for me… if they feel that the best thing for me and for them is for me to go on loan to Napoli for a season, then so be it.”

Reina made clear that leaving Anfield was not his preference in an open letter to supporters after he had been sent to Italy for the 2013-14 season. But Liverpool might argue that it didn’t tell the whole story.

The Reds replaced Reina before he eventually left when they signed Simon Mignolet. At that time, speculation was swirling that Reina would return to Barcelona, rumours the Spaniard rarely played down. But when Victor Valdes opted to stay at the Nou Camp for another year, it left Reina in limbo at Liverpool.

Brendan Rodgers felt Reina needed pushing after an inconsistent final season of eight on Merseyside. The manager says he told Reina of his intention to sign Mignolet and for the two to fight it out. But from that point on, the writing was on the wall for Reina.

His problem was the manner of his departure. “If I have one regret, it is the way I am leaving,” Reina added. “It is only natural that I would be disappointed that the Liverpool management agreed to loan me to Napoli without telling me first.”

Reina also addressed the Barca issue: “A lot has been made about me informing the club that if an offer came in from Barcelona that I would have liked them to consider it. But I had also spoken to the club about the possibility of extending my contract if the offer was not made. I told the manager that I wanted to play for Liverpool and that Barcelona would only become an option for me if the opportunity arrived, like the rumours said it would, as it would be a chance for me to go back home. When it didn’t come I was happy to fight for my place so I was surprised that Liverpool decided it was in the club’s interests to send me to Napoli instead.

“None of this will change my feelings for the club or the people in any way and now I have to look forward to a new challenge with Rafa Benitez, who I consider to be the best manager I have worked with.”

That last line seemed to sting Rodgers. “He’s already written his goodbye letter hasn’t he?” the manager replied when asked if he expected Reina to return. “I was surprised at the letter when you are a loan player so I would suspect that he should come back.

“But Pepe made it very clear when he went to Napoli he was looking to move, as he penned a great big letter saying he was going to work with the best manager that he’d worked with and thanked for his time for Liverpool. So for me it probably sounded like he’d made his decision there.”