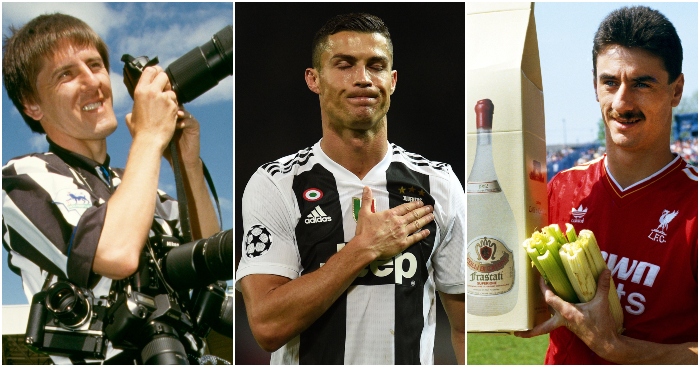 It’s been a little while since there was talk of Cristiano Ronaldo returning to Manchester United but the whispers began doing the rounds again this week. If he goes back, here are five good examples to follow…

Peter Beardsley (Newcastle United)
Beardsley had already left his hometown club once during his youth career when Newcastle didn’t fancy him as a teenager. So they had to pay £150,000 to bring him back in 1983, after which Beardsley spent four seasons in Newcastle’s first-team, taking them back into the top flight while establishing himself as an England international.

In 1986/87, Beardsley helped Newcastle narrowly avoid relegation and when the Toon accepted a £1.7million offer – a British domestic record – he was off to Liverpool, who also recruited Beardsley’s England teammate John Barnes from Watford during the same summer. Beardsley also had four seasons at Anfield during which time he won two league titles and an FA Cup. So, with the trophy itch scratched, it was off across Stanley Park to Everton.

Beardsley fared well there too, scoring 25 goals in 81 top flight games, but with the Toffees struggling financially they had no choice but to send Beardsley back to Newcastle in 1993 when Kevin Keegan plonked £1.5million in the table for the then 32-year-old.

It was to be a while longer before the years caught up with Beardsley – in fact, he was only just peaking. He managed another four seasons back on Tyneside, playing an average of 32 games per season, netting 47 Premier League goals including a career-high 21 in his first season back in black and white, all the while captaining Keegan’s entertainers.

Mark Hughes (Manchester United)
Hughes banged in 17 First Division goals for Manchester United during the 1985-86 season, but for much of it a summer move to Barcelona had already been agreed. United fans were furious – Hughes was a Stretford End hero – but the striker was the subject of a record £2million offer from Barca who offered a huge pay rise and European football.

Hughes joined Gary Lineker at Barca. Lineker thrived, Hughes flopped. He scored five goals in all competitions during his only season at the Nou Camp before he was loaned to Bayern Munich for 1987-88. There, Hughes scored six Bundesliga goals while rediscovering a modicum of form.

It was enough to tempt United into paying £1.6million to bring Hughes back to Old Trafford under Alex Ferguson in 1988. The centre-forward was never prolific (in seven seasons he never matched the 17 league goals he scored before leaving for Spain) but he helped the Red Devils win two titles and two more FA Cups. Perhaps most satisfyingly for Hughes, he also scored twice (he nicked one off Steve Bruce but his second goal was a beauty) to help United beat Barcelona in the European Cup Winners’ Cup final in 1991.

Ian Rush (Liverpool)
Rush agreed a British transfer record deal worth £3.2million to move to Europe in the same summer Wales team-mate Hughes left for Barca, but the Liverpool striker hung around at Anfield on loan for another season before making the switch to Juventus.

He travelled to Turin in 1987 with 139 Liverpool goals behind him, but Juventus certainly didn’t get the return they were looking for from their investment. Rush struggled to settle, and though the infamous “foreign country” quote was never actually uttered, both player and club decided to cut their losses after seven Serie A goals.

By that time, John Aldridge had been signed by Liverpool, as too had Beardsley and John Barnes. Between the Fab Four, they fired Liverpool to another title as well as two FA Cups, with Rush scoring in both finals. He was eventually phased out by Liverpool when Robbie Fowler burst on the scene and Stan Collymore was signed. His last appearance came at Wembley in 1996.

Didier Drogba (Chelsea)
Rolling in the winning penalty to seal Chelsea’s first and only European Cup triumph seemed like an incredibly fitting way for Drogba to leave Chelsea in 2012 after eight seasons. In that time, Drogba netted 157 goals for the Blues, helping them to win three Premier League titles, four FA Cups and three League Cups and finally the Champions League.

Three days after that triumph in Munich, Chelsea announced Drogba was leaving, with the then-34-year-old heading to Shanghai Shenhua, seemingly to wind down his career. But after six months in China, Drogba was back in Europe with Galatasaray, where he spent a season and a half, which included a return to Stamford Bridge when the Turkish side faced Chelsea in the Champions League last-16 in 2014. While Drogba was bathing in the adoration being poured upon him by his former club, he apparently forgot there was a game to play and was completely anonymous while Jose Mourinho’s side eased into the quarter-finals.

The sentiment was genuine. Mourinho brought Drogba back to Chelsea on a one-year deal ahead of the 2014-15 season. Despite being recruited to play as back-up, Drogba played 40 games in all competitions and celebrated another Premier League title as a 37-year-old.

Juninho (Middlesbrough)
A host of top European clubs were tracking the Brazil international so it was quite the coup for Middlesbrough to land the 22-year-old for £4.7million in 1995. Juninho’s arrival paved the way for Emerson and Fabrizio Ravanelli to follow, but neither came close to capturing the hearts of Teesiders like the little playmaker from Sao Paulo.

Sadly for Boro, their Galacticos experiment failed miserably. Relegation in 1997 – a mess largely of their own making after they were docked points for failing to fulfil a fixture at Blackburn – left Juninho in tears with the fans, who all understood that the Premier League player of the season was too good for the First Division. So he went to Atletico Madrid with their blessing.