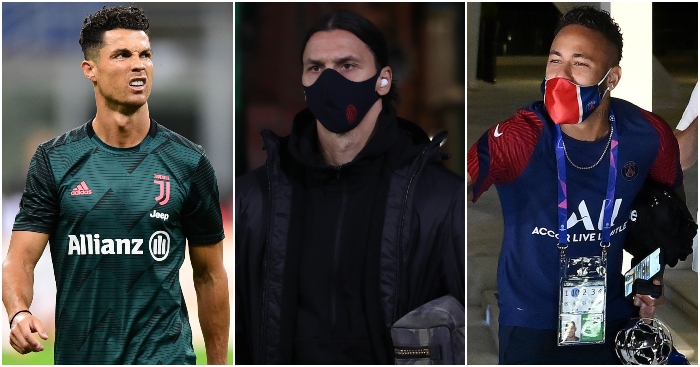 Covid-19 has wreaked havoc on football this year, with many of the top players testing positive at some point. With attack as its best form of defence, here’s a ridiculously strong XI of stars, plus a frightening bench, to have had a brush with coronavirus…

Keylor Navas
The PSG No.1 was one of six players who disappeared off to Ibiza at the end of August for a post-season break only to come back with the ‘rona. He’s hardly the first to return from a boys’ trip to the Balearics with a dose of something, though a cream and some antibiotics won’t clear up covid.

Gianluigi Donnarumma also contracted the virus in September, while Simon Mignolet caught it too. Insert your own joke here.

Matt Doherty
The Spurs right-back only emerged from isolation this week after testing positive in the wake of Republic of Ireland’s defeat to Wales.

Jose Mourinho questioned whether the Ireland party had followed all the protocols, with Callum Robinson blamed for bringing the infection into their bubble after he arrived just a couple of days after a couple of West Brom team-mates had returned positive tests.

Domagoj Vida
The Croatia captain discovered at half-time of his nation’s 3-3 draw with Turkey earlier this month that he had tested positive that morning.

He was subbed sharpish and remained in isolation in Istanbul for a few days while his team-mates flew to Stockholm to face Sweden.

Ezequiel Garay
The centre-back, perhaps as part of his Man Utd medical that seems to have been going on for the last decade, tested positive in March and in the process, Garay became the first La Liga player to confirm he had the virus.

Shortly afterwards it emerged that around 35 percent of Valencia’s squad and staff had tested positive, with a trip to Bergamo to face Atalanta in front of 40,000 people said to be to blame.

Alex Telles
The Manchester United new boy tested positive in October, forcing him to miss four games. He may have been asymptomatic, but watching the Istanbul Basaksehir defeat having shirted-up for the sofa presumably left him feeling queasy at least.

It was then feared Telles had become one of the unlucky souls to contract covid twice but a positive test while on international duty during the recent break was quickly followed by a negative one, freeing him up for Brazil duty and encouraging, successive appearances in United’s defence.

Blaise Matuidi
The midfielder, in this XI ahead of Thiago Alcantara on the basis that he’s had something even remotely interesting to say about it, was one of three Juventus players to test positive back in March. He didn’t take it well: “I was speechless. I was mad at the doctor. Why would he tell me such a thing? I couldn’t feel anything.

“It’s really hard. I couldn’t even go out shopping. It made me psychotic.”

Paul Pogba
The Manchester United midfielder had a couple of weeks at home after testing positive at the end of August, just as his team-mates were reporting for a stunted pre-season or flying off on international duty. Pogba returned a week before United’s first game of the season against Palace, though he has had plenty of time since to rest and recuperate on Ole Gunnar Solskjaer’s bench.

Cristiano Ronaldo
The Juventus star tested positive while on international duty with Portugal and the fact he flew home to Turin – on a medically-adapted plane, apparently – led to accusations of being arrogant and disrespectful from Italian politicians.

Ronaldo then didn’t help himself by branding the PCR tests as ‘bullsh*t’ after another positive result ruled him out of Juve’s Champions League clash with Barcelona.

Neymar
The Brazilian was one of the PSG six in Ibiza and though he was expected to miss Le Classique as a consequence of his diagnosis, Neymar* returned just in time to face Marseille.

Then he did this to earn himself another few weeks off…

It's all kicking off in Parc des Princes! 🤬

The game finishes 8v9 after the referee gives FIVE red cards, including one for Neymar, in the final few minutes! 😤

Mo Salah
“What I can say about my players is they are incredibly disciplined,” said Jurgen Klopp after he was asked about the circumstances around Salah’s diagnosis.

His positive test came after he attended his brother’s wedding which former Egypt striker Mido said had 800 attendees and “half of them attempted to embrace and kiss Salah”.

If you’re wondering where Mo Salah got coronavirus from – a video from his brothers wedding a couple of days ago might help? #LFC #COVID pic.twitter.com/BurRVgLEXH

Zlatan Ibrahimovic
Covid got a dose of Zlatan in September. The virus only seems to have enhanced Ibra’s powers seeing as he’s scored a ridiculous eight goals in five Serie A matches since.

*Buy Neymar and thousands of other players on Football Index. 18+, UK and Ireland customers only, begambleaware.org. T&Cs apply.